Omaha-based brokerage firm TD Ameritrade has pasted an ASCII flag imprint on the Bitcoin permanent ledger to advertise about the company on the blockchain.

According to the company, it sent 68 consecutive Bitcoin transactions to create a digital logo printing the company’s name. It used the OP_Return feature of the bitcoin protocol, that allows inserting any message regarding the transaction, to pass the characters. However, the transactions were invalid and no exchange of Bitcoin happened. Due to the very nature of the blockchain, the flag containing TD Ameritrade’s will be there permanently on Bitcoin’s ledger. 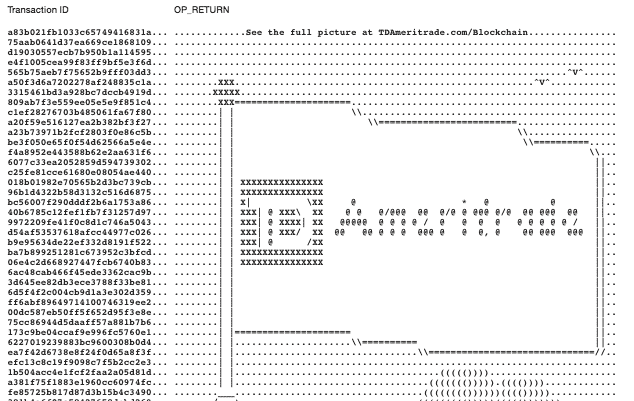 In the official announcement, the company noted: “We love finding new ways to use emerging technology. So we decided to have a little fun and plant our flag. Okay – technically, we embedded it”

“With a part of the blockchain called OP_Return, which functions like the memo space on a check, simple messages and characters can be placed within transactions on the blockchain. By linking 68 individual transactions, with 80 characters per transaction, we were able to create the larger image,” it added.

Though the feature of OP_Return was introduced in 2013, the developers do not endorse storing any arbitrary data on the blockchain as it consumes space permanently.

What is TD Ameritrade?

TD Ameritrade is a subsidiary of TD ‎Ameritrade Holding Corporation which provides online investing options to its retail and institutional clients. With the boom in the value of cryptocurrencies last year, it jumped into the crypto space by offering Bitcoin futures.

To promote its Bitcoin futures offerings, the company ran a TV commercial during last Super Bowl – most viewed sports event in North America.

Earlier this year, the firm also launched stocks and ETFs trading via Twitter direct messaging feature to attract tech-savvy youths to its platform.

Moreover, the brokerage firm recently published its quarterly report, which showed that its clients have generated a record amount of trading volumes – a total of $22.2 billion of net new client assets in three months – via the firm’s infrastructure.