The Ethereum layer-2 scaling solution deployed the first round of its long-awaited OP token airdrop on June 1 as part of its new governance project the “Optimism Collective.”

While it is unclear if Buterin is fully on board with a proposal from June 2 to utilize the OP governance token for gas fees, or just happy that such a discussion was taking place, he noted on Twitter today:

The duo also share governance decisions on network parameters and granting new citizenships to the Citizens’ House, something which Buterin seems to appreciate in this instance.

According to Optimism, the number of citizens in the Citizens’ House will grow over time, and the “mechanism for distributing Citizenships will be determined by the Foundation with input from the Token House.”

On several occasions, Buterin has outlined his thoughts that the crypto sector needs to “move beyond coin voting” in decentralized finance (DeFi) or decentralized governance (DeGov) as it runs the risks of having whale governance token holders dominating the voting process. Buterin argues this can often lead to a short-term focus of the whales approving proposals that intend to pump the price of certain assets.

Such a method can result in small holders and platform users not having a voice in the DeGov process, or what Buterin describes as a lack of non-token-hodler interests.

As for the OP gas fee proposal, which itself was floated in the Optimism governance forum for ideas and feedback yesterday, sentiment among the community appears mixed. 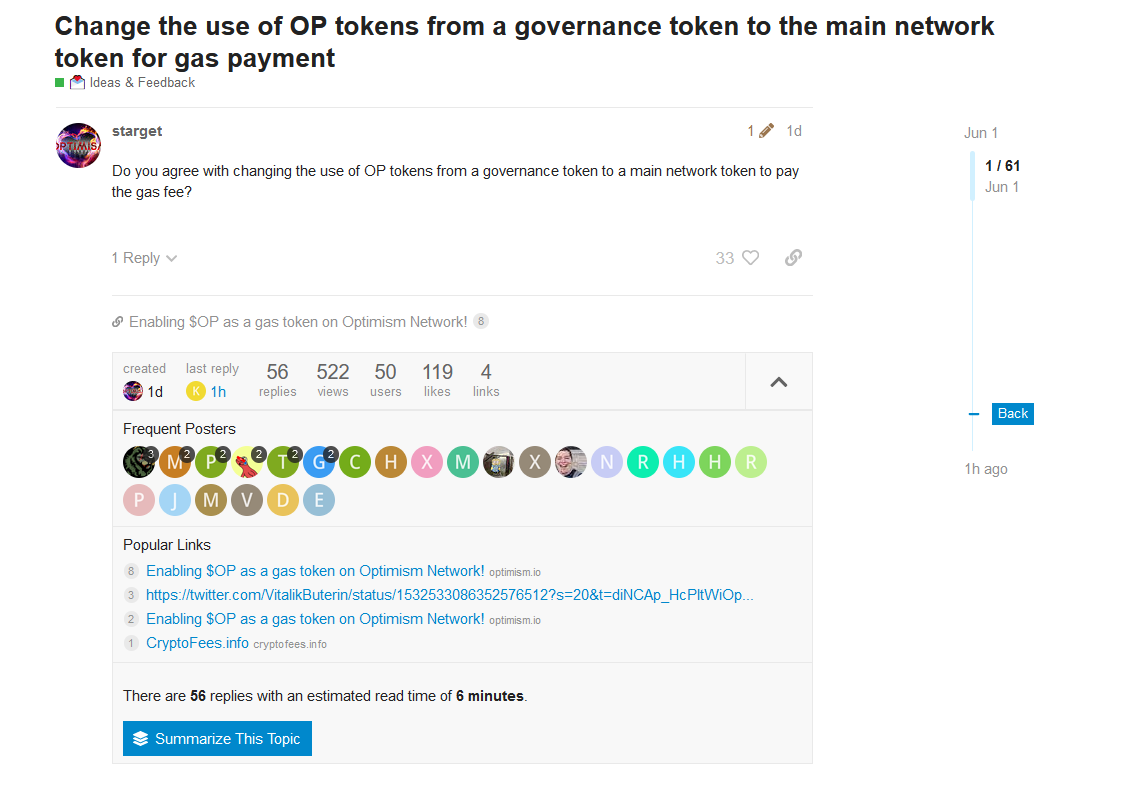 While many offered short and sharp comments of agreement, generally noting that it would give OP more utility, numerous others took the time to clearly outline why they were against the idea.

One member, Kethic, stated, “I don’t think this is a good idea. Burning voting power on a governance structure feels counter productive,” while user Vrede stated:

“Optimism is EVM equivalent. Accepting OP tokens as gas means giving up on EVM equivalence. Moreover, Optimism has to pay fees to Ethereum Mainnet in ETH. How will the OP<->ETH conversion be handled?”

User Massedai said that “this is a premature change to a system that hasn’t started to function yet the way Optimism intended,” suggesting that the project is looking to provide token value via “ecosystem profitability and not quick moves to try and pump a token.”