Coin Center, a Washingon, DC-based non-profit blockchain advocacy group, filed a lawsuit against the United States Department of the Treasury for allegedly provisioning an unconstitutional amendment in the controversial infrastructure bill. 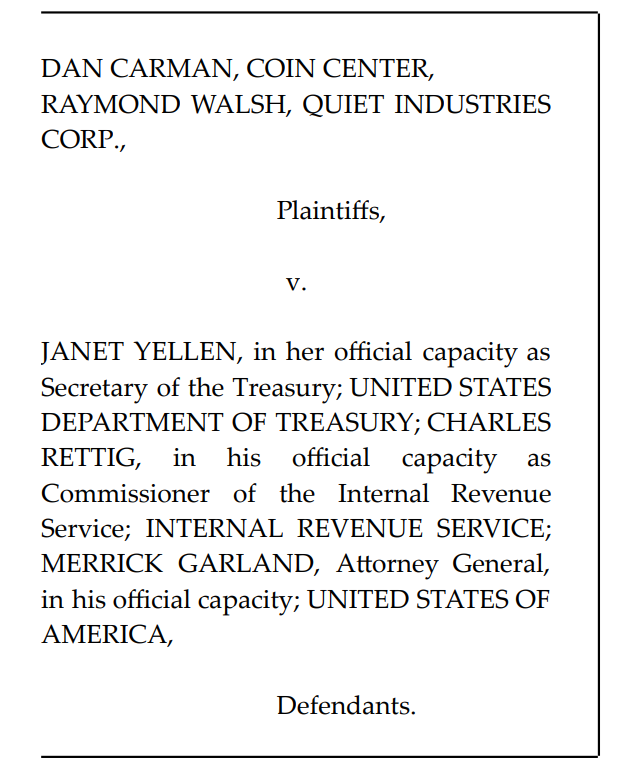 In an official announcement, Coin Center revealed the filing of a suit against the Treasury Department in federal district court — challenging the enforcement of Section 6050I’s reporting mandate within the Infrastructure Investment and Jobs Act. The lawsuit read:

“In 2021, President Biden and Congress amended a little-known tax reporting mandate. If the amendment is allowed to go into effect, it will impose a mass surveillance regime on ordinary Americans.”

The 6050I amendment requires individuals and businesses to report information related to all incoming transactions worth $10,000 or more, which includes the sender’s name, date of birth and Social Security number.

Coin Center, in its announcement, highlighted how the amendment affects the entire crypto community, including the NGOs that receive anonymous donations and nonfungible token (NFT) artists who will have to reveal their client’s personal information to the government.

“The second claim is about our freedom of association,” the company added as it pointed out a Supreme Court ruling that forbids the government from forcing organizations to keep and report lists of their members.

On an end note, Coin Center reached out to the crypto community for support, stating that:

“We are considering adding additional co-plaintiffs to this suit, so if you might fit this description and are interested, please get in touch.”

Last week, on June 7, Cointelegraph came across a leaked copy of a US draft bill concerning cryptocurrency doing the rounds on Twitter.