As the meltdown in the crypto markets continues, we are seeing the value of several cryptocurrencies swoop. The latest of the lot, Cardano (ADA) traded below $0.55 on Friday. Consequently, the market capitalization of the cryptocurrency plunged from above $20 billion to just above the $18 billion mark.

However, Cardano whales were on hand to come to its rescue as they accumulated the cryptocurrency en masse with the longing of driving its price back up. According to data released by the on-chain data provider Santiment, close to 160 Cardano whales purchased $ADA worth over $100,000 on Friday. The data also revealed that the transactions occurred just six hours late Friday. 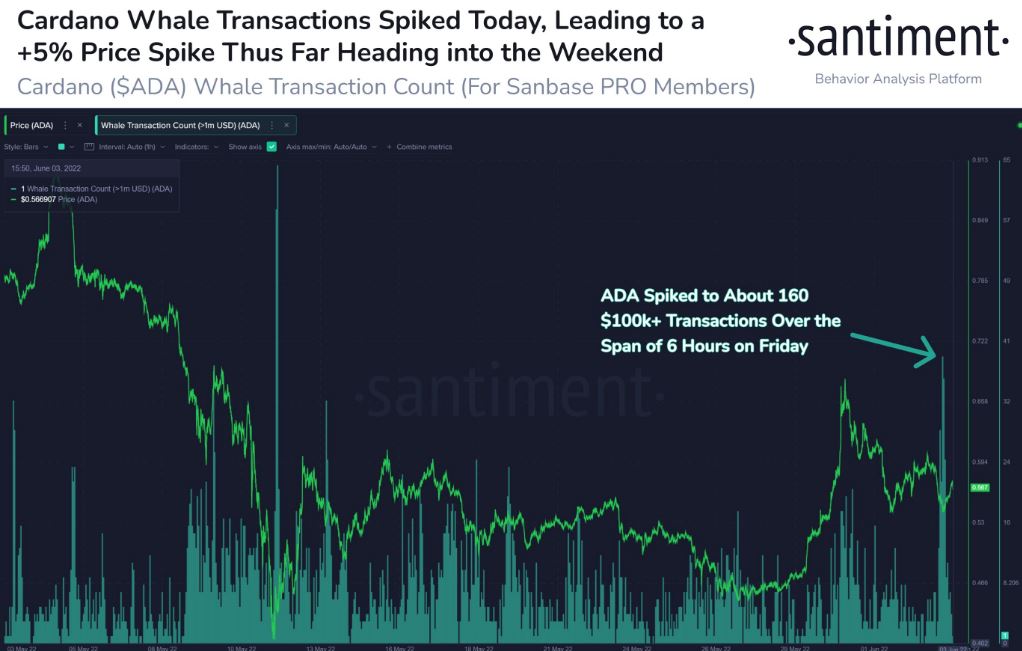 Revealing these transactions, Santiment wrote: “ADA Spiked to about 160 $100K plus transactions over the span of 6 hours on Friday.”

Following this wave of whale accumulation, the Cardano price rose over 6%, bumping to levels just above $0.57, with its market capitalization rising to above $19 billion. In the process, this accumulation helped Cardano usurp XRP, making it the sixth-largest cryptocurrency by market valuation.

In a tweet revealing the accumulation, the on-chain analytics firm noted that the latest wave of Cardano whale accumulations jolted ADA’s price by over 28% within 18 hours.

Santiment tweeted, “#Cardano got a small bounce the second half of Friday trading after large whale transaction counts began to appear on the $ADA network. An extreme example of the last time whales accumulated on a downswing, prices jumped +28% in the span of 18 hours.”

However, due to the uncertain market conditions, it looks like this was a move targeted at expanding the market capitalization rather than boosting the price.

This time around, since the accumulation, ADA has seen a little retracement from $0.57 to $0.56 and is up by over 20% in the week, making it the biggest gainer in the top 20 cryptos by market cap. Earlier this week, the amount of NFTs issued on the Cardano chain crossed 5 million, driving the cryptocurrency to resurgence.