As many as 73.5% of Ethereum nodes are now marked as “Merge ready” ahead of the upcoming Bellatrix upgrade for Ethereum on Sept. 6, according to data from Ethernodes.

The Bellatrix upgrade is seen as one of the last necessary steps prior to the official Merge, which will see Ethereum transition to a proof-of-stake consensus mechanism between Sept. 10-20.

To become Merge ready, Ethereum node operators must comply with the Bellatrix upgrade by updating its consensus layer clients prior to epoch 144896 on the Beacon Chain, which is scheduled to take place on 11:34:47am UTC on Sept. 6, 2022, according to the Ethereum Foundation. 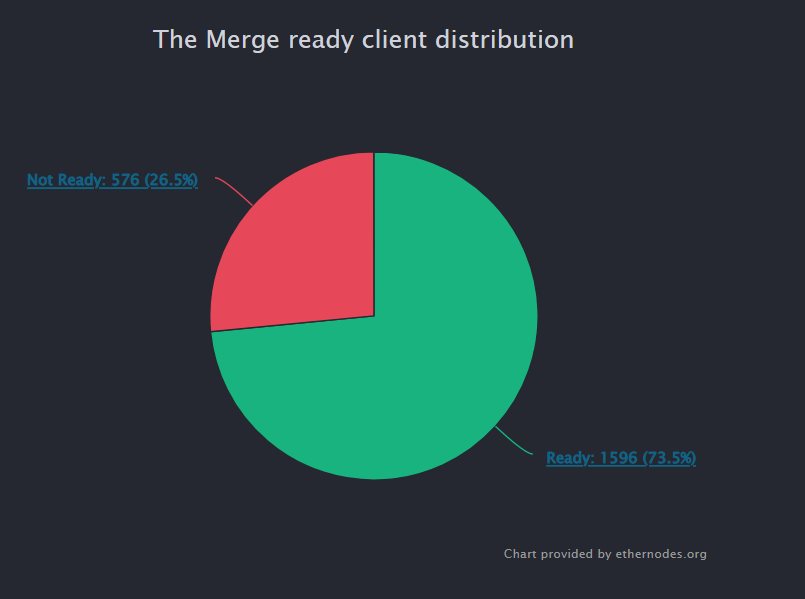 However, with as many as 26.7% of nodes marked “Not-Ready” for the Ethereum Merge, Ethereum co-founder Vitalik Buterin and core developer Tim Beiko and has taken themselves to Twitter to push the remaining node operators updates their clients.

According to the Ethereum Foundation, node operators that don’t make the update prior to the Bellatrix upgrade will cause the Ethereum clients to “sync to the pre-fork blockchain,” warning:

“[Node operators] will be stuck on an incompatible chain following old rules and will be unable to send Ether or operate on the post-Merge Ethereum network.”

According to Ethernodes, most of the “Not-Ready” nodes are found on the geth client, who have yet toupgrade to Geth v1.10.23 or higher.

Other Ethereum clients that require updating include Erigon, Besu, and Nethermind.

Ethereum nodes are required to validate blocks and can be run by different Ethereum client software that varies in the programming language used and code base.

Following the Bellatrix upgrade, the last part of the Ethereum Merge will occur in what is called the “Paris event,” which will be triggered when the Terminal Total Difficulty (TTD) reaches 58750000000000000000000, which is estimated to occur around Sept 15.

Related: The Merge Q&A: A triumph for Ethereum — or a disaster waiting to happen?

Once the execution layer exceeds this TTD, the next block will be produced by a Beacon Chain validator. The finalization of this block will mark the complete transition of Ethereum’s blockchain to the proof-of-stake mechanism.

According to the Ethereum Foundation, Ethereum users do not need to do anything with their ETH and Ethereum-based assets during the Merge but should be on the lookout for scams that suggest otherwise.