Bitcoin (BTC) has been in a rut, and BTC’s price is likely to stay in its current downtrend. But like I mentioned last week, when nobody is talking about Bitcoin, that’s usually the best time to be buying Bitcoin.

In the last week, the price took another tumble, dropping below $19,000 on Sept. 6 and currently, BTC bulls are struggling to flip $19,000–$20,000 back to support. Just this week, Federal Reserve Chairman Jerome Powell reiterated the Fed’s dedication to doing literally whatever it takes to combat inflation “until the job is done,” and market analysts have increased their interest rate hike predictions from 0.50 basis points to 0.75.

Basically, interest rate hikes and quantitative tightening are meant to crush consumer demand, which in turn, eventually leads to a decrease in the cost of goods and services, but we’re not there yet. Additional rate hikes plus QT are likely to push equities markets lower and given their high correlation to Bitcoin price, a further downside for BTC is the most likely outcome.

So, yeah, there’s not a strong investment thesis for Bitcoin right now from the perspective of price action and short-term gains. But what about those who have a longer investment horizon?

Bitcoin’s price is currently 72% down from its all-time high at $69,000. In the previous bear markets, BTC’s price saw a 55% correction (July 21), a 71% drop by March 2020 and an 84% correction in December 2018. While brutal to endure, the current 72% correction is not outside of the norm when compared to previous drawdowns from all-time highs. 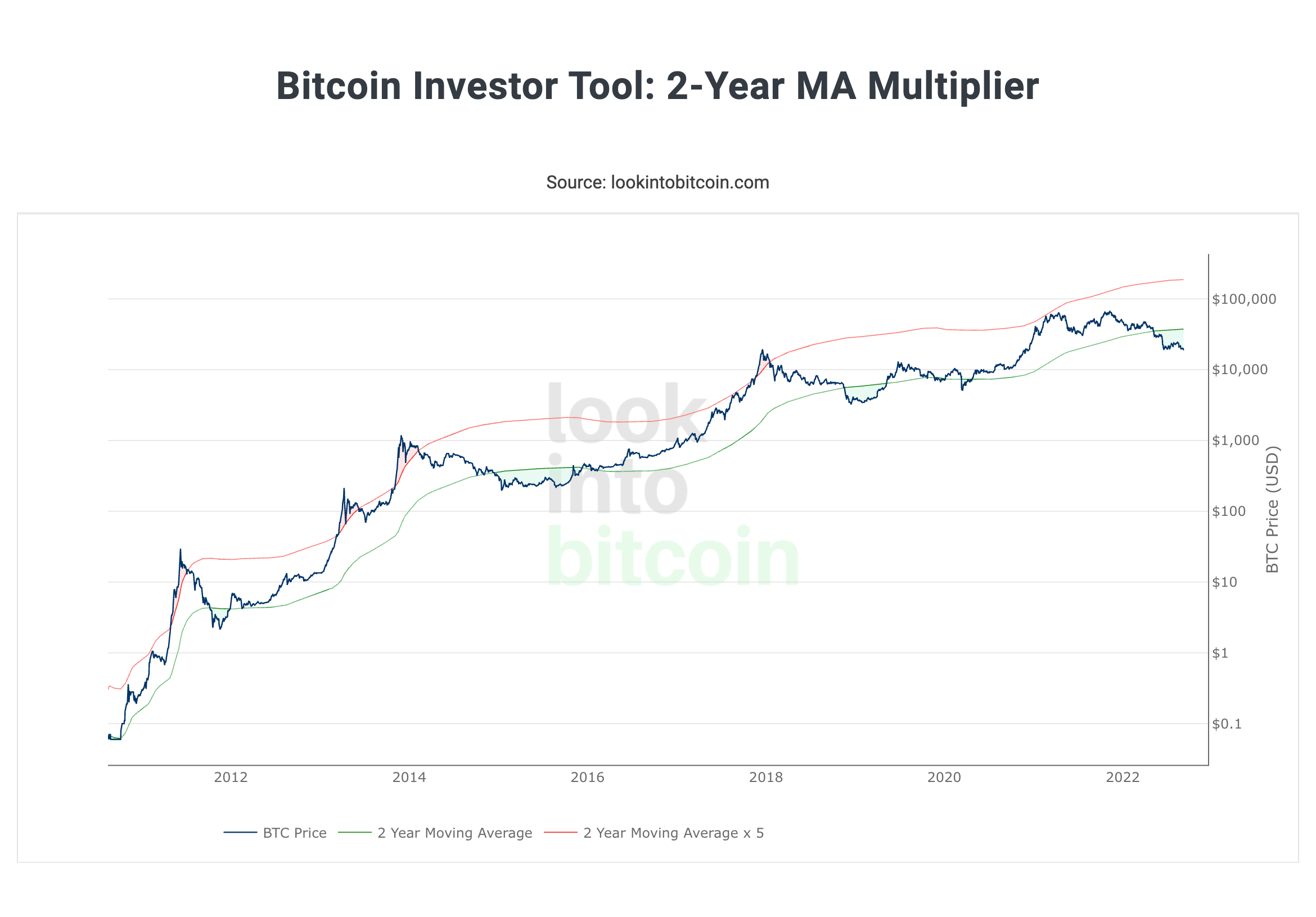 Comparing this drawdown data against the 2-year MA multiplier, one will notice that the price dropped below the 2-year moving average, carved out a trough and then consolidated for multiple months before resuming the 12-year-long uptrend.

These areas are the “shaded” zones below the green 2-year moving average. Zooming in on the right side of the chart, we can see that price is again below the 2-year moving average, and while there is no sign of a “trough” being dug, if historicals are to be relied upon, the price is currently in what could be described as a consolidation zone.

Another interesting moving average and Fibonacci sequence-based indicator that suggests Bitcoin’s price is undervalued is the golden ratio multiplier.

According to LookIntoBitcoin creator Philip Swift:

“The chart explores Bitcoin’s adoption curve and market cycles to understand how price may behave on medium to long term time frames. To do this, it uses multiples of the 350 day moving average (350DMA) of Bitcoin’s price to identify areas of potential resistance to price movements.”

Swift further explained that “specific multiplications of the 350DMA have been very effective over time at picking out intracycle highs for Bitcoin price and also the major market cycle highs.” Essentially, the indicator is:

“An effective tool because it is able to demonstrate when the market is likely overstretched within the context of Bitcoin’s adoption curve growth and market cycles.” 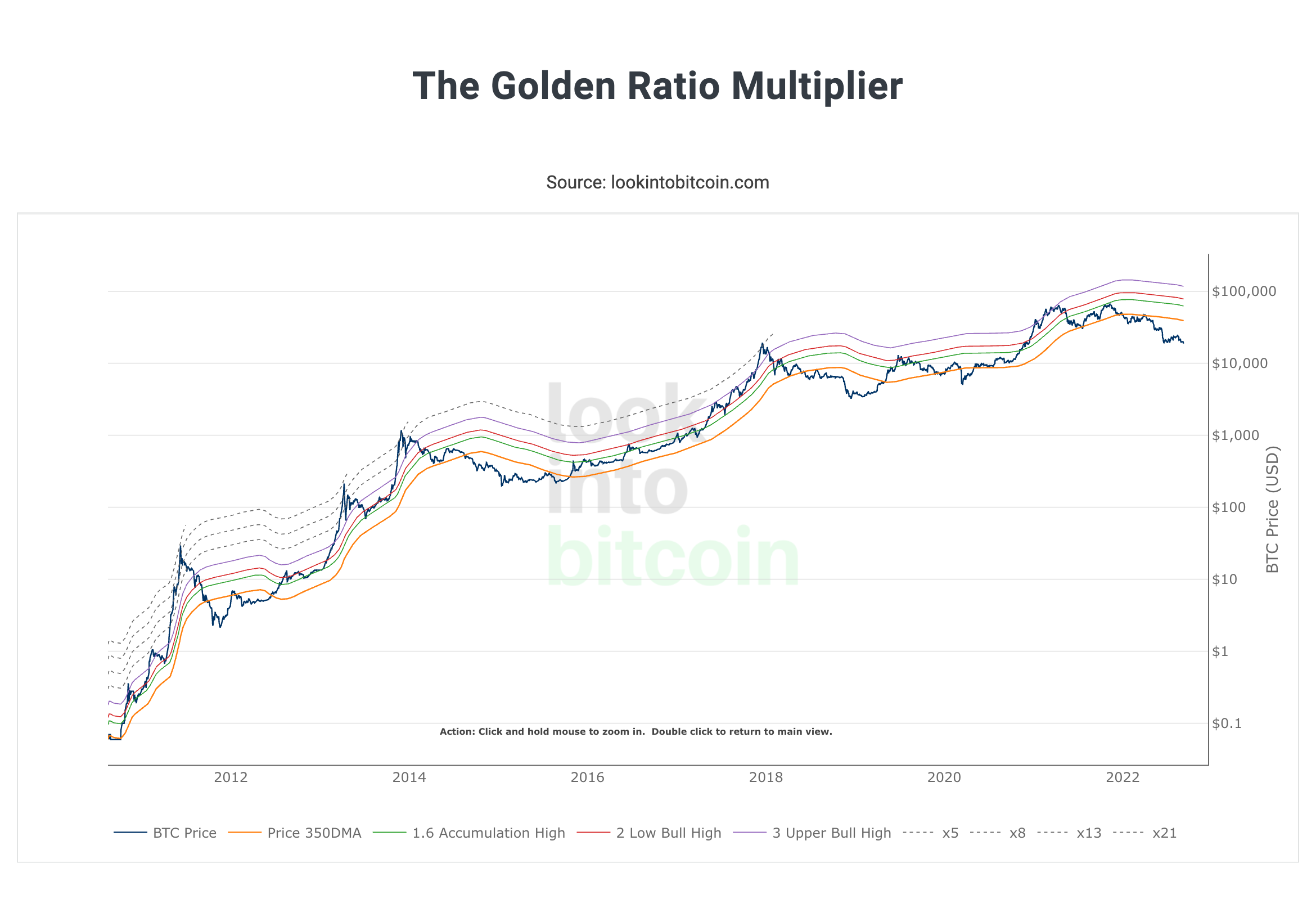 Currently, BTC’s price is below the 350DMA and similar to the 2-year MA multiplier. Dollar-cost-averaging into extreme lows has proven to be a wise method for building a Bitcoin position. 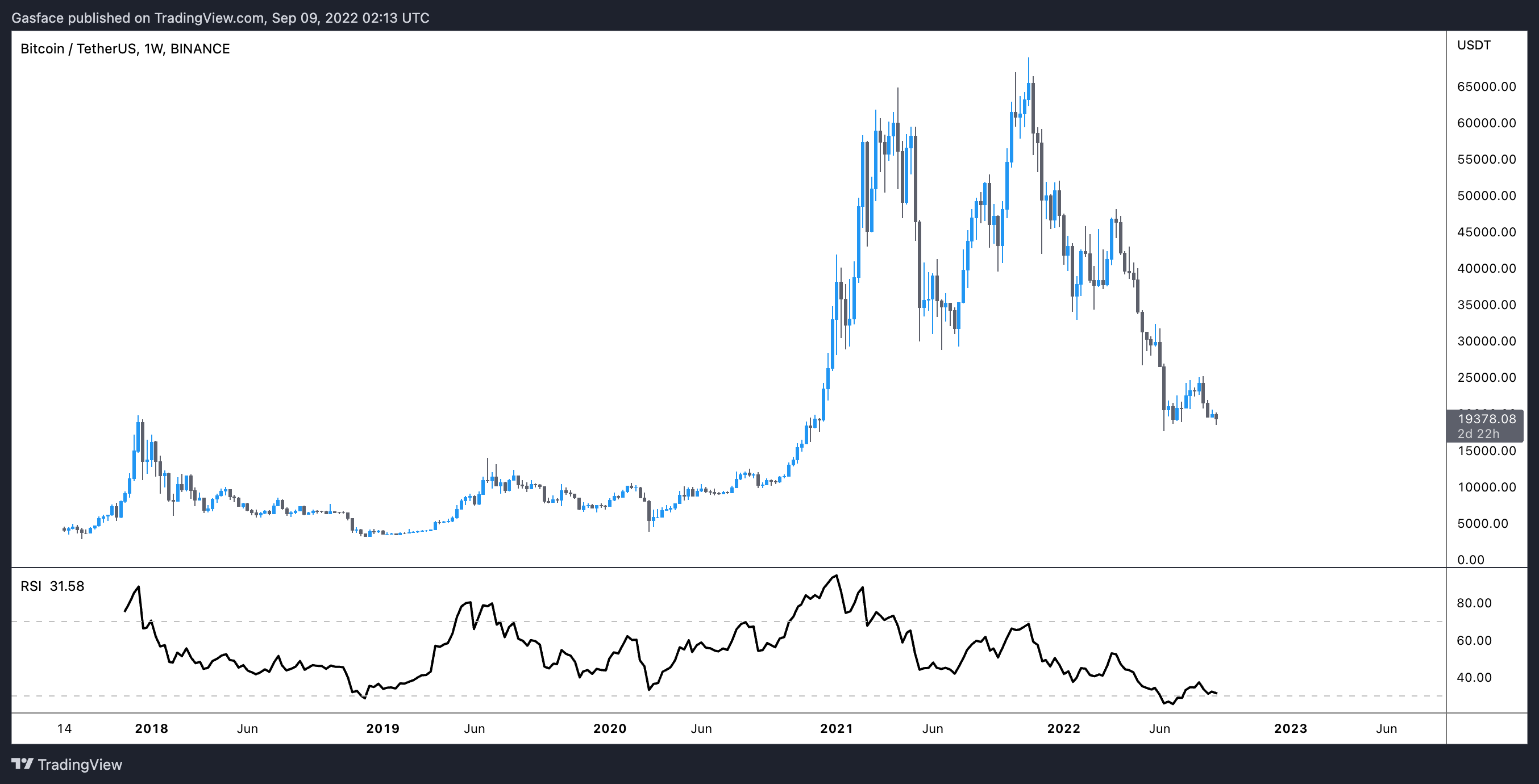 Taking a look at Bitcoin’s one-week relative strength index (RSI) also shows that the asset is nearly oversold. When comparing the weekly RSI to BTC’s candlestick chart, it’s clear that accumulation during oversold periods is also a profitable tactic.

Related: A bullish Bitcoin trend reversal is a far-fetched idea, but this metric is screaming ‘buy’

An on-chain indicator called the MVRV recently hit its lowest score since 2015. The metric is essentially a ratio of BTC’s market capitalization against its realized capitalization, or in simpler terms, the amount people paid for BTC compared to the asset’s value now.

According to Jarvis Labs analyst “JJ,” Bitcoin’s MVRV (market capitalization versus realized capitalization) indicator is printing a reading that is extremely low. The analyst elaborated: 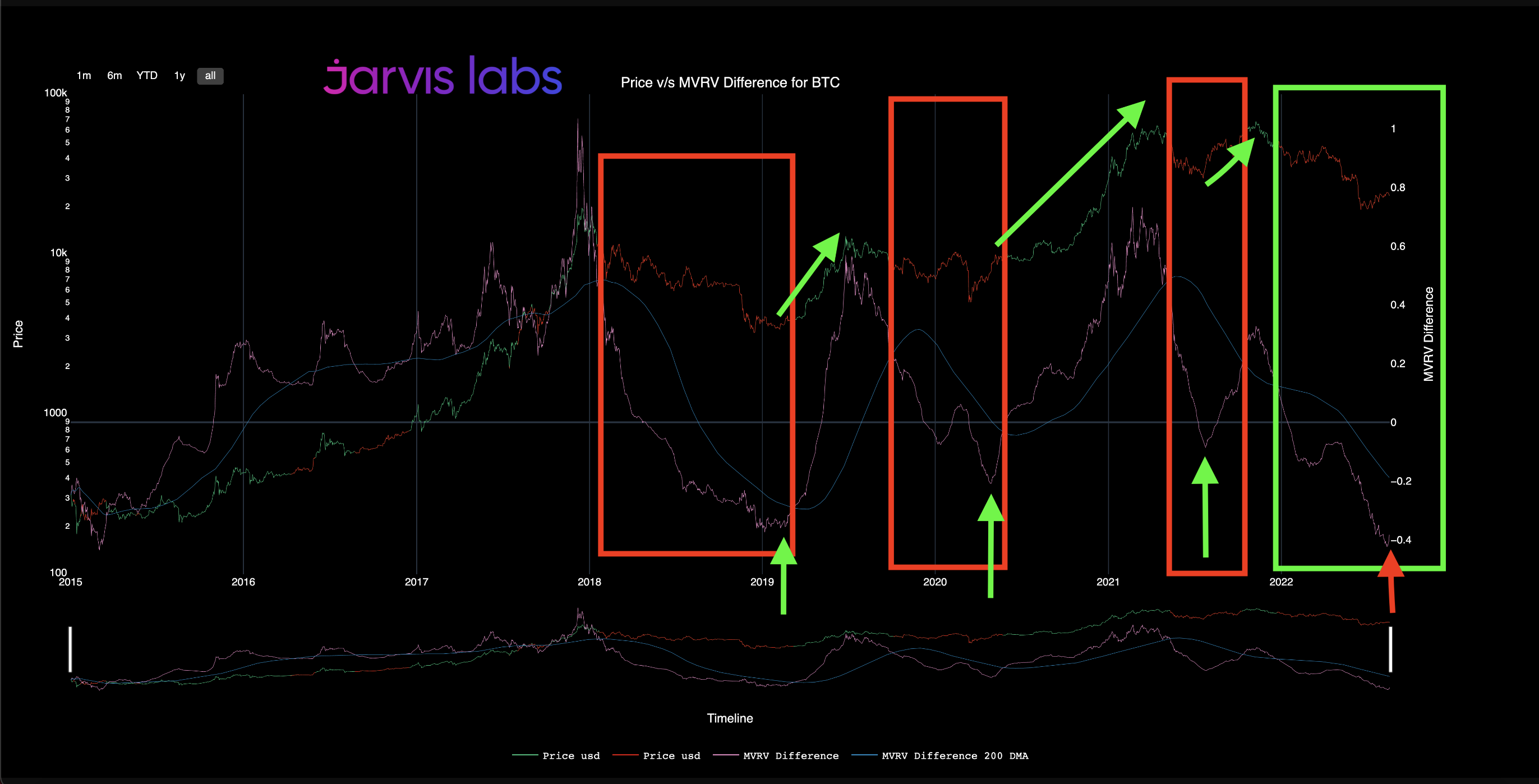 The MVRV Z-score provides insight into when Bitcoin is undervalued and overvalued relative to its fair price. According to analytics firm Glassnode, “when market value is significantly higher than realized value, it has historically indicated a market top (red zone), while the opposite has indicated market bottoms (green zone).” 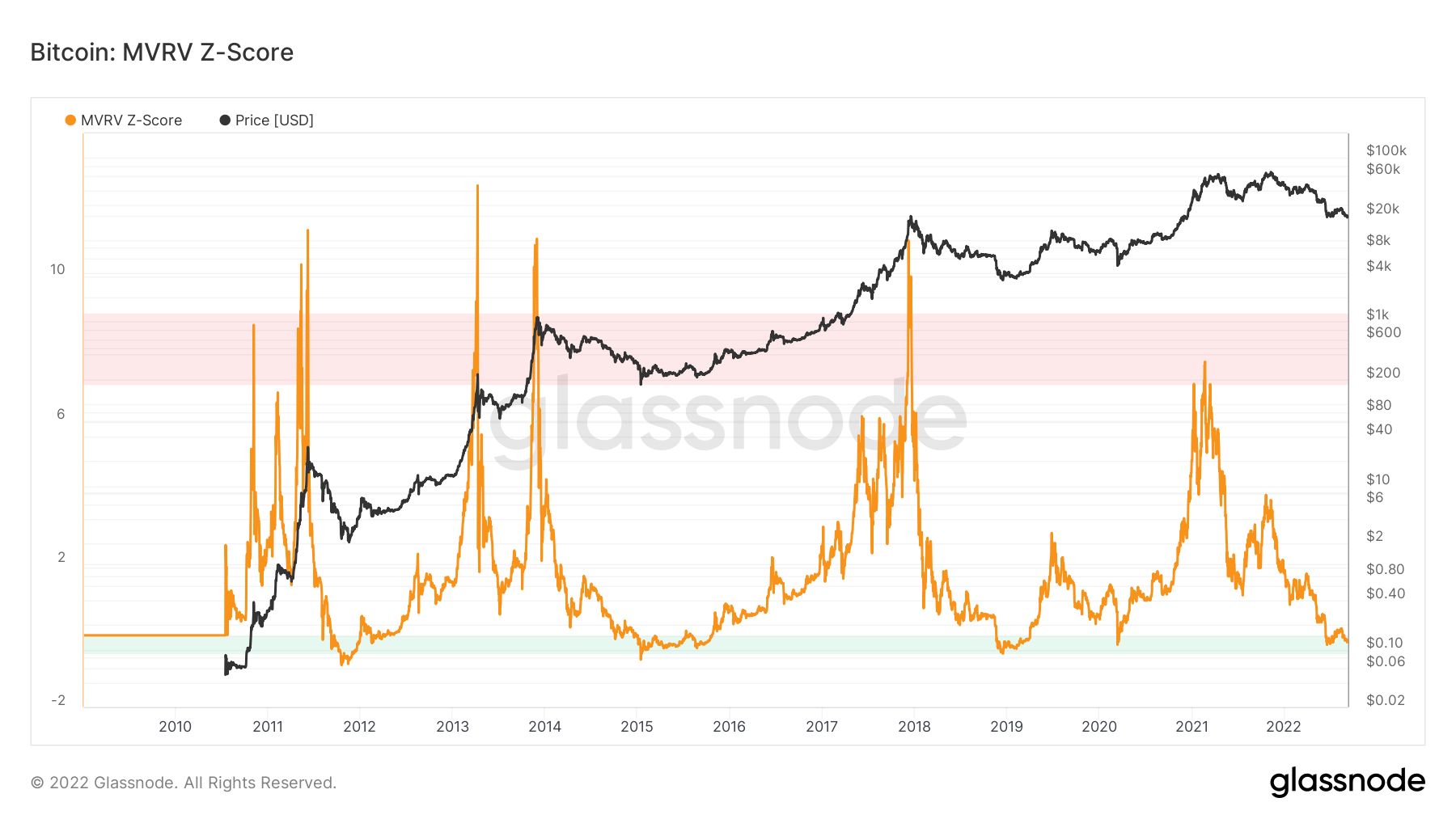 Looking at the chart, compared against BTC’s price, the current -0.16 MVRV score is in the same range as previous multi-year and cycle bottoms for Bitcoin’s price. A pure interpretation of the data would suggest that Bitcoin is in the midst of a bottoming process and possibly entering the early stages of accumulation.

Of course, its price could drop much further, and the bearish factors that are battering equities markets will likely also continue to impact crypto prices, so none of the indicators mentioned above should be relied on as the solitary rationale for investing.

The crypto market is in bad shape, and that seems unlikely to change in the short term, but timing market bottoms is also impossible for most traders. So, what investors should look for is confluence among a variety of metrics and indicators that align with one’s thesis.

At the moment, most of Bitcoin’s on-chain metrics and technical analysis indicators suggest sensible dollar-cost-averaging into a manageable position. The key is risk management. Don’t invest more than you can afford to lose, and you won’t have to worry about losing your shirt.

This newsletter was written by Big Smokey, the author of The Humble Pontificator Substack and resident newsletter author at Cointelegraph. Each Friday, Big Smokey will write market insights, trending how-tos, analyses and early-bird research on potential emerging trends within the crypto market.

Disclaimer. Cointelegraph does not endorse any content of product on this page. While we aim at providing you all important information that we could obtain, readers should do their own research before taking any actions related to the company and carry full responsibility for their decisions, nor this article can be considered as an investment advice.