The Nasdaq Composite has been inching toward its all-time high, and a number of the biggest technology stock gainers could have more room to rise, CNBC’s Jim Cramer said Tuesday.

The tech-heavy index picked up 0.30% during the session to close just above 8,000, about 1.6% off the all-time high it recorded in August.

“Alphabet, Snap and Alibaba have been screaming higher, and as much as we hate to chase on ‘Mad Money,’ the charts, as interpreted by Bob Lang, suggest that all three of these internet stocks have more room to run,” the “Mad Money” host said.

Lang is founder of ExplosiveOptions.net, an options trading service, and a contributor at TheStreet.com, the financial news service co-founded by Cramer. Lang relied on the Ichimoku Cloud and Chaikin Money Flow indicators to make a case, Cramer said.

The Ichimoku Cloud, which has been around for about five decades, measures stock price averages to determine bullish and bearish momentum. The Chaikin oscillator measures buying and selling pressure, Cramer said.

“I don’t know if he’s right, but it never hurts to have the charts on your side,” Cramer said. 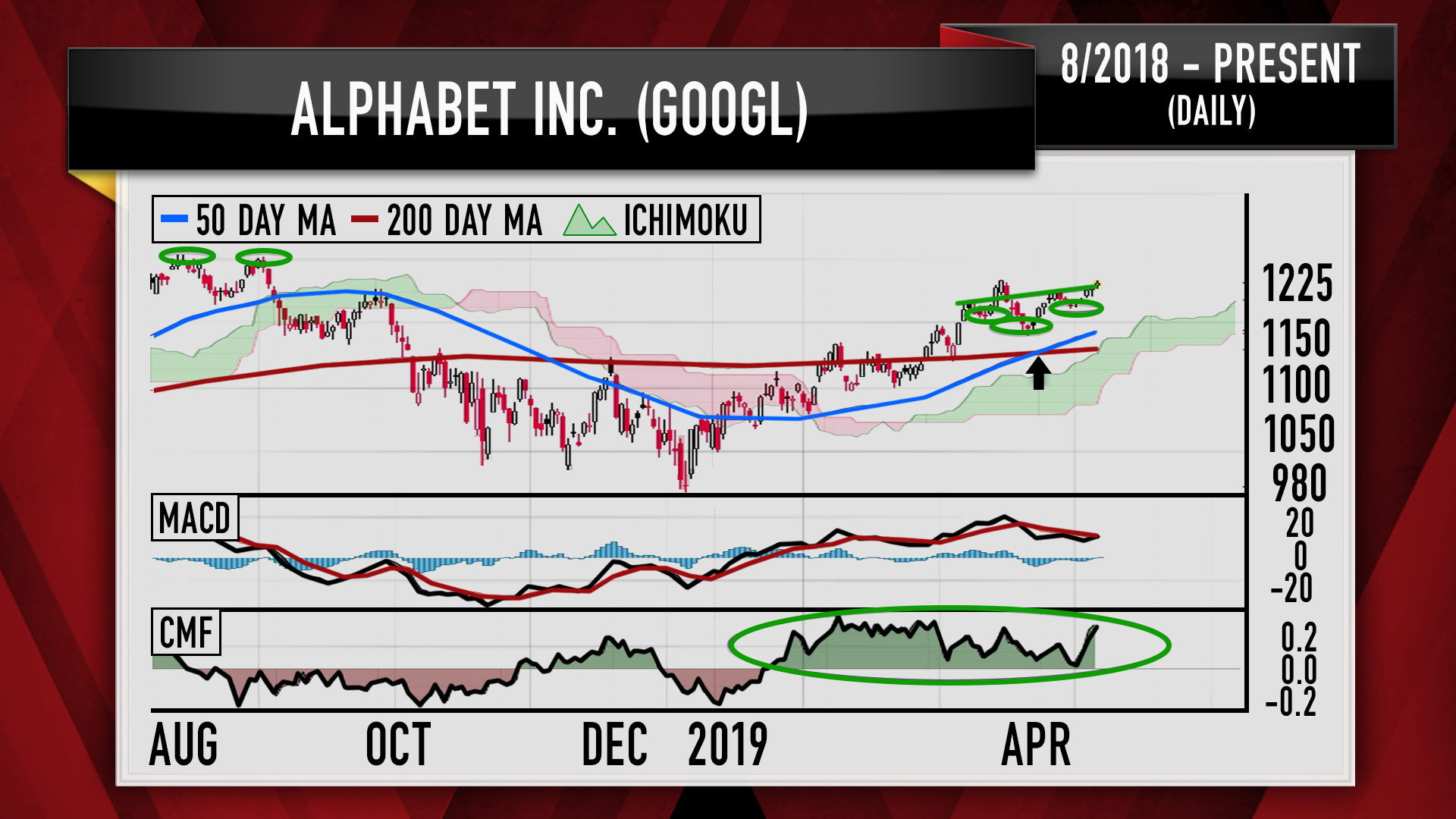 The charts are telling a bullish tale about Alphabet, according to Lang.

Shares of Google’s parent have rallied more than 18% in 2019 and recovered all of the stock’s losses since dropping off in early October during the fourth-quarter sell-off.

Alphabet’s 50-day and 200-day moving averages have produced a golden cross, where the former average exceeds the latter average — a marker hedge fund managers love to see, he explained.

“The stock has recently been making a series of small inverse head-and-shoulders formation … it looks like an upside down person. And this is one of the most reliably bullish patterns in the book,” he said.

The stock is now close to its ceiling of resistance, and Lang thinks it could rise to $1,280 if the pattern holds up, Cramer said. Additionally, the Chaikin measure has been positive since mid-January, which can indicate that big institutions are buying into the stock, he pointed out.

“Put it all together and Lang thinks Alphabet is a $1,232 stock that can break through to $1,300 in short order. He’s betting we break out [of] that barrier in not that long after the company reports earnings … [on] April 19.” 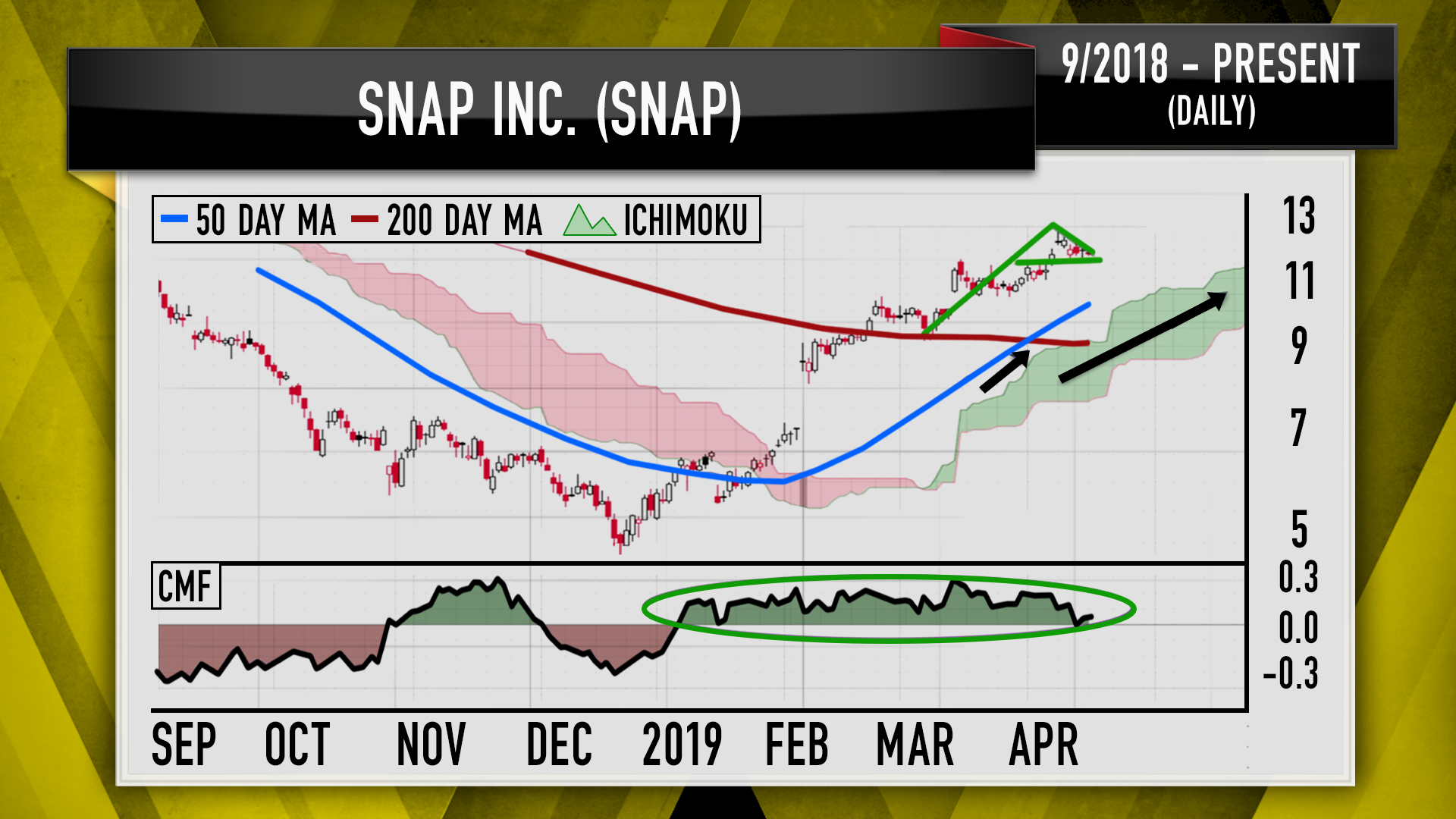 Cramer said Snap, the owner of the disappearing content social platform Snapchat, has been on fire after it bottomed under $5 in December. The stock has more than doubled in 2019, powered by its positive earnings report in early February.

Lang highlighted that Snap has rallied on steadily increasing volume, Cramer explained. After a consolidation period, the rally could pick back up. 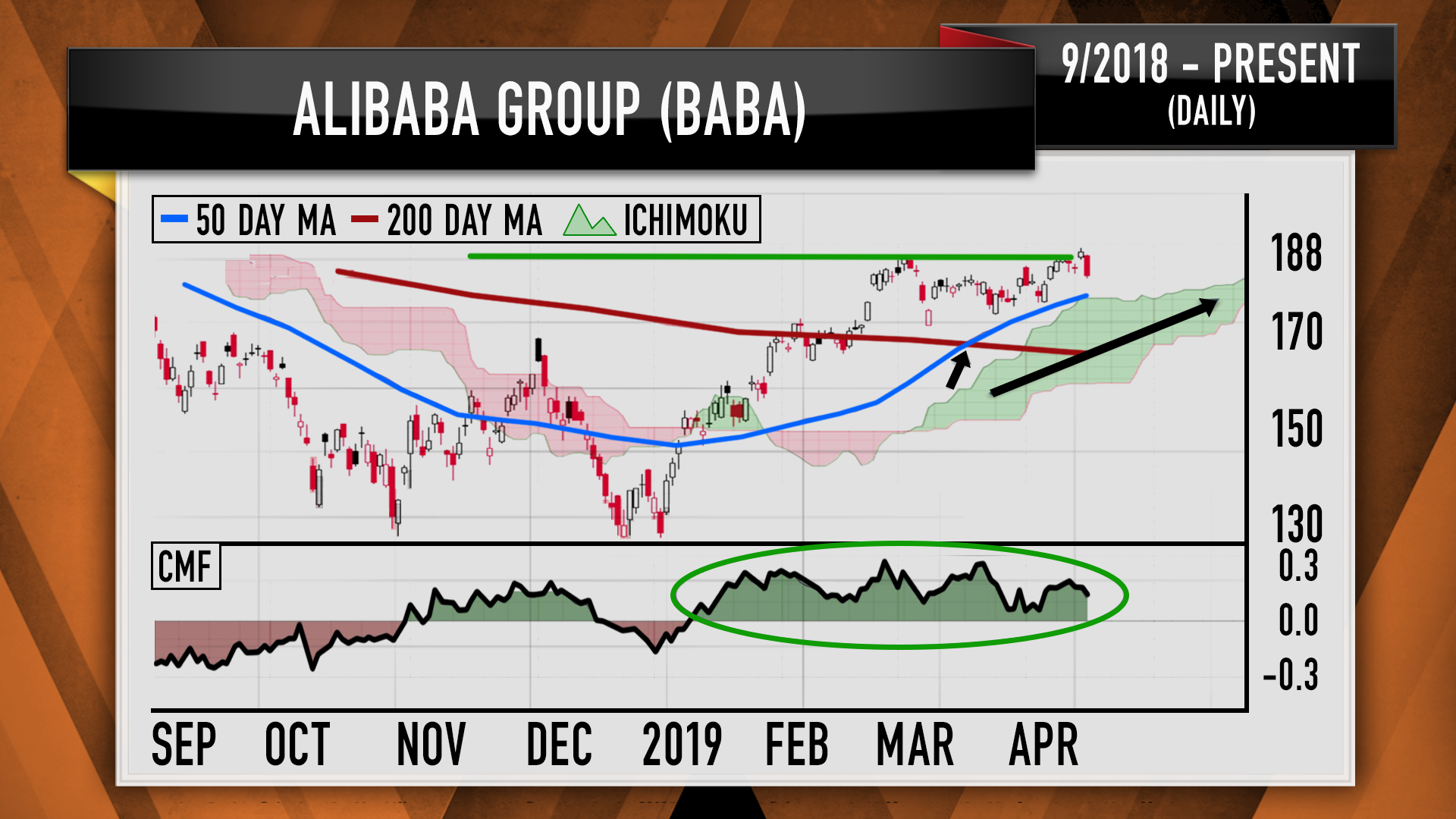 Alibaba, often called the “Amazon of China,” is edging closer to $188 — a key technical level for the stock. The stock has been a “powerhouse” since cratering from the high $160s to nearly $130 in the fourth quarter, Cramer said.

Like Snap, Alibaba has rallied on rising trade volumes. Its Chaikin indicator has been strong for months, Cramer said. Lang also sees expansion on the charts, the host added.

“He likes that we got a golden cross last month … and the 50-day moving average provides as a nice floor of support,” Cramer said. “Put it all together and he could see Alibaba making its way back to all time highs [around] $210.”

MetaTrader 5 Platform Updated with Negative Price Capabilities
We and our partners use cookies on this site to improve our service, perform analytics, personalize advertising, measure advertising performance, and remember website preferences.Ok