According to the official announcement of Tether’s launch on Polygon, the latter network’s DeFi ecosystem ‘will benefit greatly from Tether’s role in its development.’

Tether’s integration into Polygon means that it’s over 19,000 Dapps and 8,000 development teams can now access the liquidity provided by the stablecoin. Polygon’s over 142 million unique user addresses ‘will have a major stable digital currency to generate returns from while moving freely within and across the network.’

Tether’s CTO, Paolo Ardoino, further pointed out that the Polygon ecosystem had witnessed tremendous growth and Tether will continue to help it thrive. He said:

We’re excited to launch USDt on Polygon, offering its community access to the most liquid, stable, and trusted stablecoin in the digital token space.

The Polygon ecosystem has witnessed historical growth this year and we believe Tether will be essential in helping it continue to thrive.

USDT on Tron Still Exceeds that on Ethereum as Tether’s Circulating Supply Remains Stable at $72.537 billion

To note is that Tether is still ranked third in terms of market capitalization and has witnessed an $11 billion reduction in its market cap as a result of stablecoin jitters in the crypto market catalyzed by UST’s massive depegging event.

However, zooming out to view Tether’s market capitalization data over the years, it can be concluded that USDT’s growth is still unmatched in the stablecoin arena. The chart below, courtesy of Coinmarketcap, further provides a visual cue of Tether’s growth over the years. 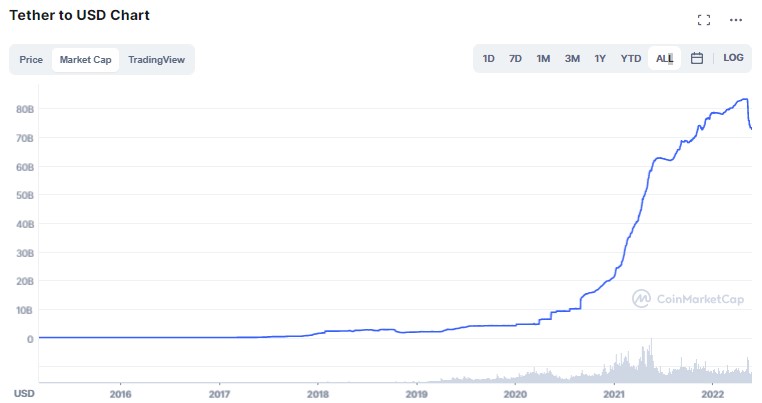