As the disconnect between the US stock market and the health of the country’s economy continues to widen, shares of SoftBank Group Corp (9984.T) have fallen by 5 per cent in early trading this Monday, after the company made big bets on equity derivatives linked to listed technology companies.

SoftBank is a Japanese multinational conglomerate holding company which has been labelled as the “Nasdaq whale” by the Financial Times, and a string of other media outlets, including The Wall Street Journal, have reported that SoftBank has made massive bets on tech stocks using equity derivatives.

Despite large cases of COVID-19 across the United States and the coronavirus pandemic putting intense pressure on the world’s largest economy, the stock market, particularly in the tech sector, has been booming.

Citing unnamed sources familiar with the situation, the Financial Times has also reported that SoftBank has made trading gains of around $4 billion from founder Masayoshi Son’s bets on equity derivatives.

According to a suite of unnamed sources speaking to the media, the Tokyo-headquartered firm has been buying shares in technology companies such as Amazon (AMZN.O). Overall, the company has purchased $4 billion worth of options and generated an exposure of around $50 billion, the WSJ said. From this, the conglomerate has made around $4 billion in trading gains.

“SoftBank was riding the Nasdaq wave like a mutual fund,” Mitsushige Akino, senior executive officer at Ichiyoshi Asset Management Co told Bloomberg. “The market is falling now and investors have zero visibility, so they are selling SoftBank stocks.”

Since April, the share price of SoftBank has fallen by a maximum amount of 5.7 per cent on an intraday basis. Up until today, the conglomerate’s stock had gained 33 per cent this year. 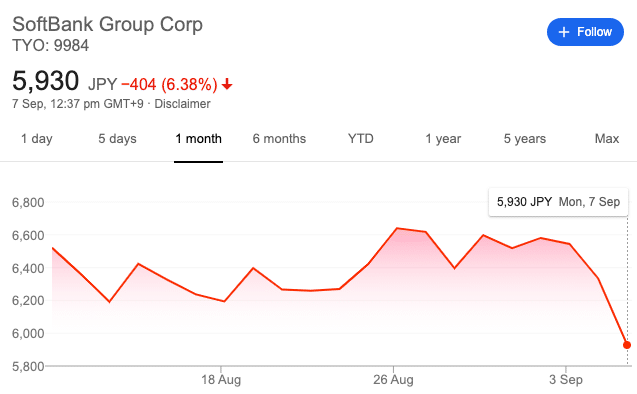 SoftBank has so far declined to respond to media requests for comment.

Ripple’s XRP Up 5.5% in Past 24 Hours, XRP Poised to Act as Neutral Bridge Asset between…

Commerzbank Secures Manfred Knof as Chairman and CEO
We and our partners use cookies on this site to improve our service, perform analytics, personalize advertising, measure advertising performance, and remember website preferences.Ok