In 2017, Bancor pioneered automated market makers (AMMs) to replace order books using a native reserve asset, the BNT token. After losing ground to other decentralized exchanges such as Uniswap or Sushiswap, Bancor’s v2.1 showed that the project is far from over.

Understanding Bancor can be tricky because of the system’s complexity, but there is a reason why the total value locked in the protocol has skyrocketed in 2021. 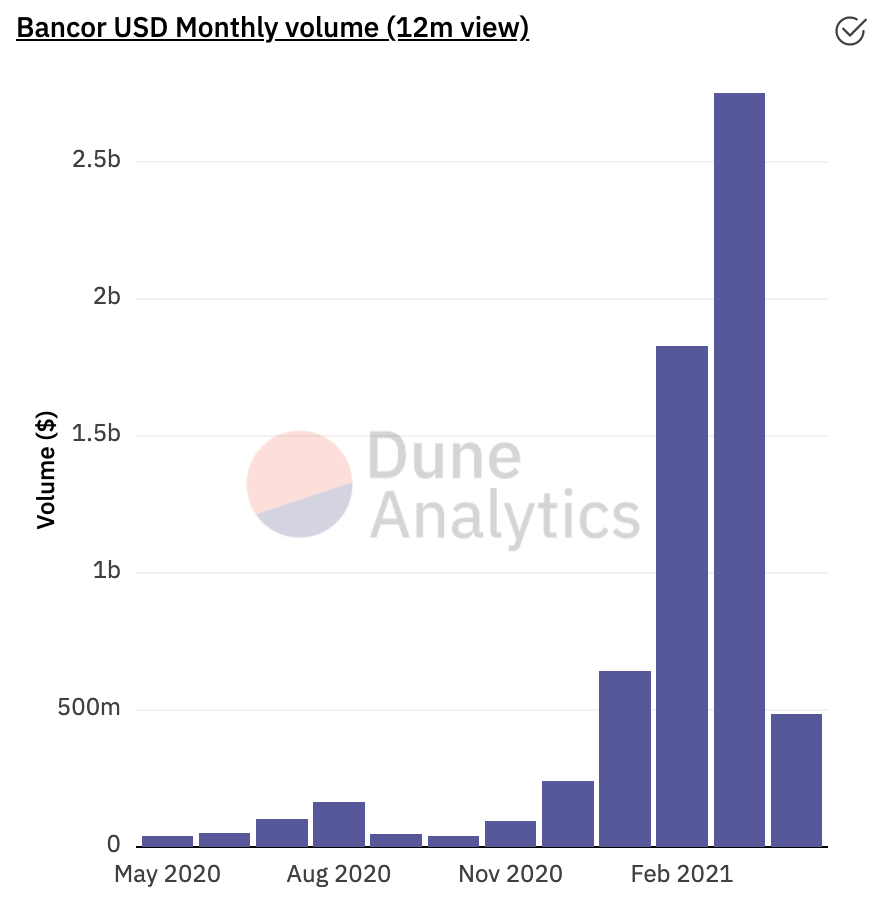 In October 2020, Bancor released v2.1 to an enthusiastic user base. Still, it took the market some time to notice that Bancor has been working to solve some of the most significant problems users face when they stake their coins.

To understand these improvements, a broader explanation of Bancor’s system is needed.

In 2017, Bancor came up with a method to trade coins on-chain through a new system. Instead of leveraging order books, the protocol introduced pooled trading. By creating different pools of ERC-20 tokens and Bancor’s native token, BNT, traders could effectively exchange with the pool instead of each other. The more liquidity provided to the pool, the lesser the price impact for any transaction. To attract funds, liquidity providers were promised part of the swap fee from these transactions. To this day, this system is fundamentally unchanged in all of DeFi. Decentralized exchanges all function with liquidity pools used by traders to exchange currencies.

The next big innovation in decentralized exchanges was creating pools between any two ERC-20 tokens, removing the necessity for a central currency. Largely, Ethereum took on that role as it makes up $3.4 billion out of Uniswap’s $7.6 billion current liquidity. This convenience is largely why Bancor struggled to keep up with Uniswap or Sushiswap, especially during the summer of 2020.

BNT is at the center of Bancor. All liquidity pools are divided equally between an ERC-20 token and BNT. In that sense, BNT is a sort of neutral unit of exchange. Interestingly, this idea of a neutral exchange currency to facilitate global trade stems from economist John Maynard Keynes.

At the Bretton Woods conference, he proposed a supranational currency called “bancor,” which would be used internationally to settle transactions between different national currencies.

However, Bancor’s unique system allows specific innovations which would be impossible for its competitors. In v.2.1, for example, Bancor introduced impermanent loss protection and single-sided liquidity provision.

When users stake funds in a liquidity pool, they expose themselves to impermanent loss. In simple terms, this means that they will become increasingly exposed to the weaker asset they provided over time. As the price of both assets change, originally supplied equally, the liquidity pool automatically updates the user’s liquidity to keep a 50/50 split in value between the two.

In a blog post, the Bancor team illustrated this issue by comparing holding LINK from April 2019 to April 2020 and supplying liquidity to an AMM like Uniswap in the same period. 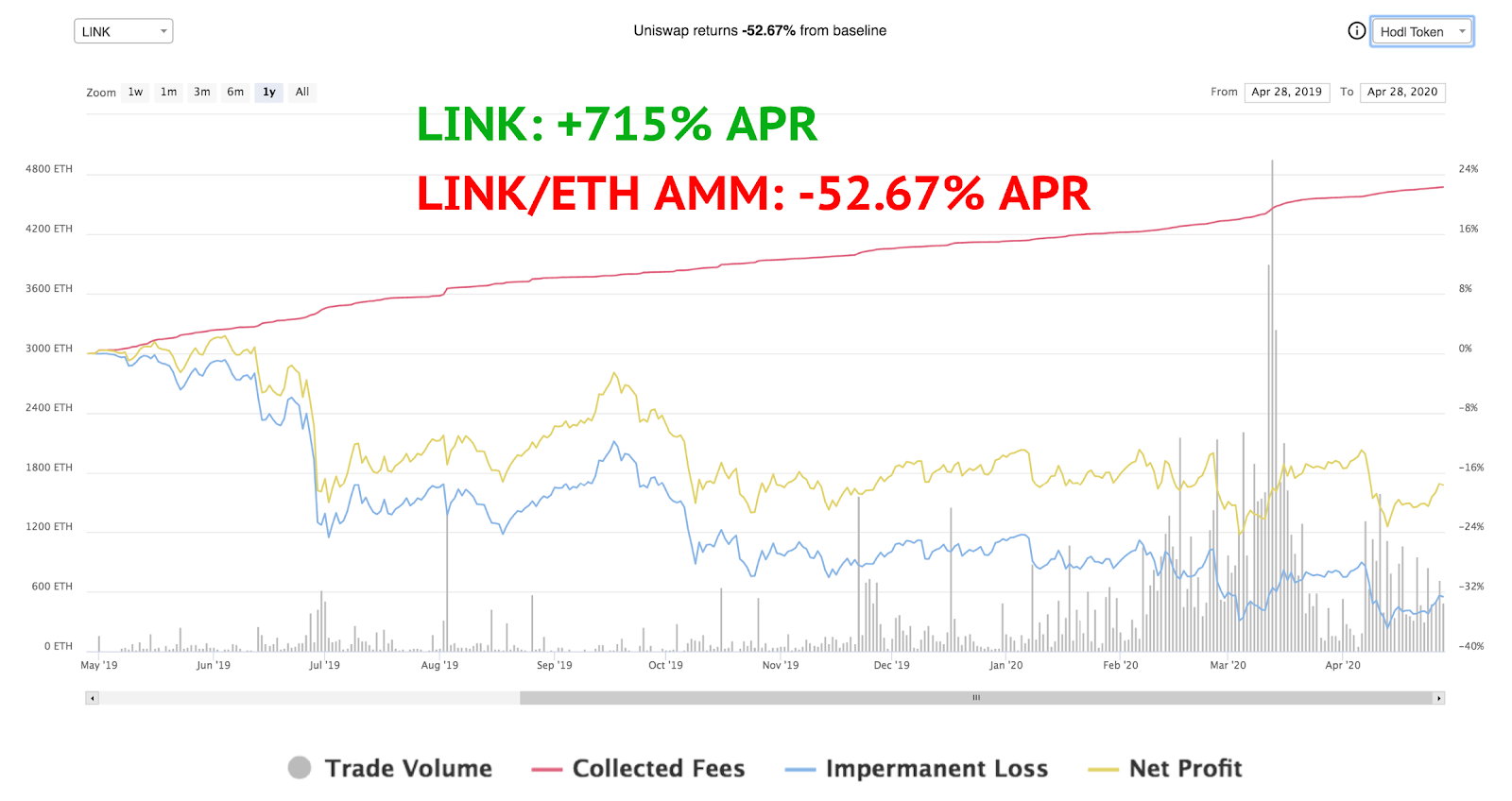 As the price of LINK quickly grew during that year, AMMs consistently sold it for Ethereum to conserve a 50/50 split of assets in the liquidity pool. While both LINK/ETH liquidity providers and holders made a profit, the fees generated by supplying funds to Uniswap were insufficient to cover the impermanent loss.

In v2.1, Bancor aimed to solve the impermanent loss (IL) issue by subsidizing potential impermanent loss. Everyday funds are staked in Bancor; users receive 1% of impermanent loss “insurance.” After 100 days, liquidity providers are entirely insured from any losses they might have suffered because their preferred asset’s price grew much quicker than the second one in the liquidity pool.

Besides this impermanent loss protection, Bancor’s BNT system is uniquely suited to allow single-sided liquidity. This means that, contrary to other decentralized exchanges, users can choose to supply only one of the two assets in Bancor’s liquidity pools. While Balancer offers a similar service, they immediately sell part of the supplied coin for the other one. Bancor, however, co-invests in pools with its native coin BNT to keep the pools balanced.

When users invest in a Bancor pool, Bancor essentially provides as much value in BNT as in the users’ token. From this invested BNT, the protocol earns swap fees and uses them to reimburse any impermanent loss incurred by the users during their time in the liquidity pool. However, when users add BNT to the pool, the protocol burns its added BNT and the fees accrued, diminishing the total amount of BNT in circulation. 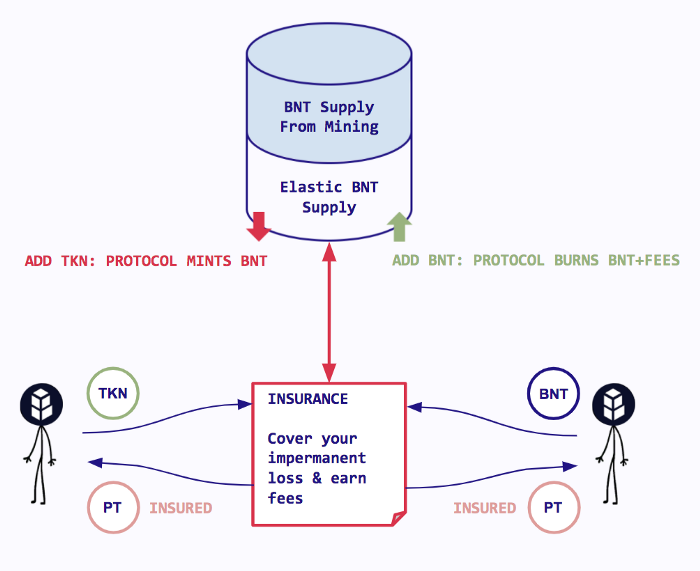 As Uniswap founder Hayden Adams, the creator of Uniswap, explained, users face two types of risks when they supply funds to a liquidity pool.

First, there are unavoidable impermanent loss risks in a liquidity pool between two tokens whose value is unrelated. Eventually, as the price of the two tokens diverges, users end up with different quantities of each token, changing the user’s amount of exposure to these two tokens. But, just as problematic, one takes inventory risk by supplying two tokens in equal measure while expecting much better results from one of the two.

With v2.1, Bancor solved inventory risk by allowing single-sided liquidity and subsidizing any impermanent loss in the liquidity pools. This system is made possible by Bancor’s unique model and can’t be replicated by decentralized exchanges such as Uniswap, Sushiswap, or Curve.

To further incentivize participation, Bancor has also started offering substantial liquidity mining rewards on certain pools selected by governance. The current liquidity mining rewards for providing major cryptocurrencies such as LINK, ETH, WBTC, SNX, or AAVE hover between 10% and 20% APY while supplying BNT to these pools can pay up to 70% APY in BNT. These rewards are voted on by governance roughly every two months.

The Shortcomings of Bancor

According to DeFi Pulse, Bancor has $1.78 billion currently staked in its smart contracts, 31% of the current biggest decentralized exchange Uniswap. In contrast, Uniswap did $1 billion in volume over the last 24 hours, according to CoinGecko. Compared to that, Bancor’s $70 million in volume only represents 7% of its competitor.

In essence, while Bancor is doing a phenomenal job at incentivizing users to provide liquidity on their platform, they do not seem to attract as much traffic and volume on their exchange. This is an important issue as volume represents liquidity provider fees. If those disappear, then the incentive to LP on Bancor disappears as well.

This lack of volume could be due to two different issues—first, the strength of network effects. Uniswap became the dominant exchange during DeFi summer and has been the go-to address for any project launching its coins. In contrast, Bancor’s whitelisting process adds a lot of security to its pools but lacks the speed and openness of Uniswap.

Anyone can make a pool on Uniswap at any time. In a sector as fast-paced as DeFi, this is an incredible advantage that can turn dangerous very quickly. Rugpulls, scam tokens, and many other issues can arise from this policy. For now, though, these drawbacks aren’t enough for the Uniswap team to reconsider its stance.

The second issue is the gas fees, which are exacerbated by the current congestion on the Ethereum blockchain. One of the most important innovations of Uniswap was gas optimization.

In a test swap operated on Apr. 9 at fast gas prices of 126 gwei, an identical swap between ETH and DAI cost $90 on Bancor compared to $41 on Uniswap. If the transaction included BNT, the gas fee on Bancor dropped to $55.

This is almost unavoidable due to the structure of Bancor. Bancor doesn’t have an ETH/DAI liquidity pool. To swap ETH with DAI, the protocol must use BNT as a medium of exchange. Due to the rise in the price of ETH and blockchain technology’s inherent limits, gas fees have become a significant issue.

Before v2.1, liquidity providers needed to supply equal parts BNT and their token of choice to Bancor’s liquidity pools. The addition of single-sided liquidity was nothing less than a game-changer for Bancor by removing this problematic barrier. The new liquidity provision system also allows for improved tokenomics and subsidizes the tricky issue of impermanent loss.

As the numbers show, the future looks bright for Bancor. Liquidity has grown, but most importantly, the amount of unique users has also seen a sharp rise. Liquidity providers have taken notice and with improved liquidity comes improved prices for traders with lower slippage. This creates a positive spiral that improves the protocol as more people use it. 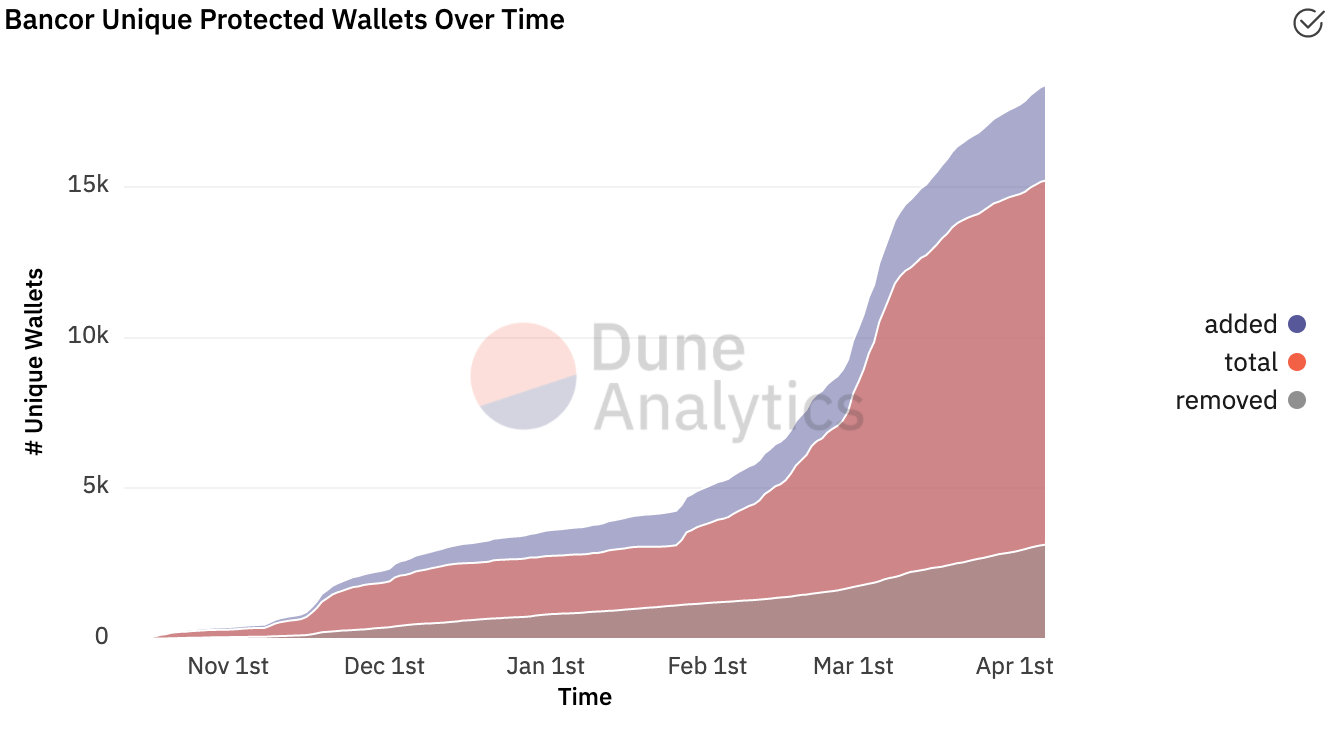 In the last few months, Bancor has also doubled down on adding features facilitating access to the protocol. In March, they added a fiat ramp allowing users to access Bancor directly from their fiat bank accounts.

The tokenomics of Bancor have also been given additional thought. Starting with their next update, Bancor will use 5% of all swap fees to repurchase vBNT from the open market and burn it. As vBNT is received by users when they lock BNT in the protocol, this will gradually lock an increasing amount of BNT in the liquidity pools forever, reducing the circulating supply.

While gas optimization will be a determining factor for Bancor’s future, the hottest topic in DeFi right now is layer 2 solutions.

Bancor suffers from Ethereum congestion and high gas fees like many other DeFi protocols. With Uniswap’s v3 announcement, the pressure on other protocols to offer layer 2 solutions has increased. On a call with the Bancor team, Crypto Briefing learned that this is something they’re keeping a close eye on. The team insisted on the necessity of doing it right and not rushing an incomplete solution.

More information on a layer 2 solution can be expected in the coming weeks.

Disclaimer: The author held ETH, BNT, and several other cryptocurrencies at the time of writing.