At the timestamped link above Bitstocks CEO Michael Hudson beautifully juxtaposes the much-scrutinized dichotomy between privacy and anonymity. Hudson criticizes the way digital currency wallets store coins today, stating that this makes it “very easy” for a “company like Chainalysis to do what they do.”

He then states that the way Bitstocks is managing their coins for their users is unique, stating that he is “pretty f****** confident” that Chainalysis will not be able to trace the transactions, while remaining “legally and lawfully compliant.”

These statements corroborate Dr. Craig Wright’s article on Bitcoin’s privacy model which was written to teach users how to maintain privacy when transacting. A simple technique Wright describes is to split coins ahead of spending into approximate denominations that can be used at each merchant separately.

For example, if I have a 1 BSV coin and plan to spend according to the following budget:

One can split these coins into sub-denominations, for example 4 coins (0.05, 0.1, 0.2, 0.15) could make up the 0.5 total cost at the grocery store to achieve further obfuscation such that it is nearly impossible to tell where the coins are coming from. HandCash implements this type of scheme with via Output Bills. However, as briefly touched on in that article, change outputs can cause issues like revealing information about the participants.

Spending this way removes the need for change which also reduces complexity in preserving privacy, while being optimal for peer-to-peer offline transactions. Granted, Bitcoin is far away from being used as a conventional method of payment to the degree where specific amounts match prices (ex. Lunch costing 0.1 BSV instead of 0.12871805 BSV); this is why scalability is so important.

Despite BSV wallets efforts in 2020 to go ‘peer-to-peer’ this approach still misses the mark on privacy and offline capability.

While these efforts did gain an advantage in wallet scalability the consequences of an immediate broadcast by either side kill some powerful use-cases. Wright himself chastises this approach in his epic Arnhem speech from 2017 at the timestamped link below:

If the sender can transact without caring about change, they can pass the raw transaction directly to the merchant without ever needing to be connected to the Internet. The point brought up in the article by HandCash and Money Button becomes moot since merchants want to be paid as soon as possible, it is not the wallet or software providers concern to make sure the receiver gets paid.

Additionally, the raw transaction (along with a local copy of block headers for an SPV check) contain all the necessary information to validate without ever making a network call. Wallets can then discard the UTXOs locally when the sender gives the merchant the raw transaction, so a double-spend is not necessarily a concern.

This is how a Bitcoin can truly function as p2p, private cash without the Internet—this scenario can be repeated where the merchant splits their newly received coins in the same way before spending.

Services benefit from this architecture as well. In Dean Little’s BSVABI proposal, he highlights the advantages of this model for applications.

This design pattern is exactly how the new Twetch Wallet works, which is why it is such a great UX improvement over wallets who broadcast the transaction first. 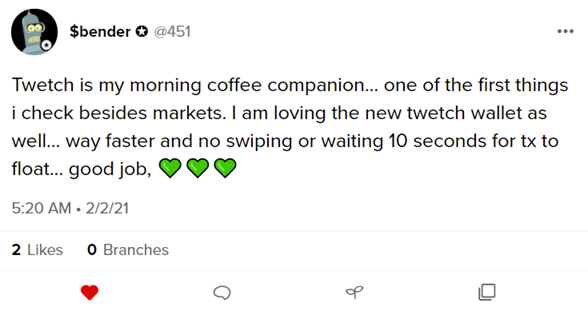 Bitcoin can be used in a way those on the outside looking in cannot trace what you are doing, but participants can in the case they have to—ideally how markets should function. By using the electronic cash to its full capability, we can hide from Big Brother while showing him our middle finger.