Coin Metrics, a leading data provider on all things cryptocurrency and blockchain, estimated that the number of wallet addresses holding at least 1 million XRP has dropped to 1,567 from 1,721 between Dec. 21, 2020 and Jan. 3. In other words, it appears that XRP whales are liquidating a portion of their holdings amid regulatory uncertainty surrounding Ripple.

As the following chart from Coin Metrics illustrates, XRP’s 1 million token club had been rising consistently since early 2019 before plunging sharply in late December. Addresses holding at least 1 million XRP are at the lowest level since October 2019. 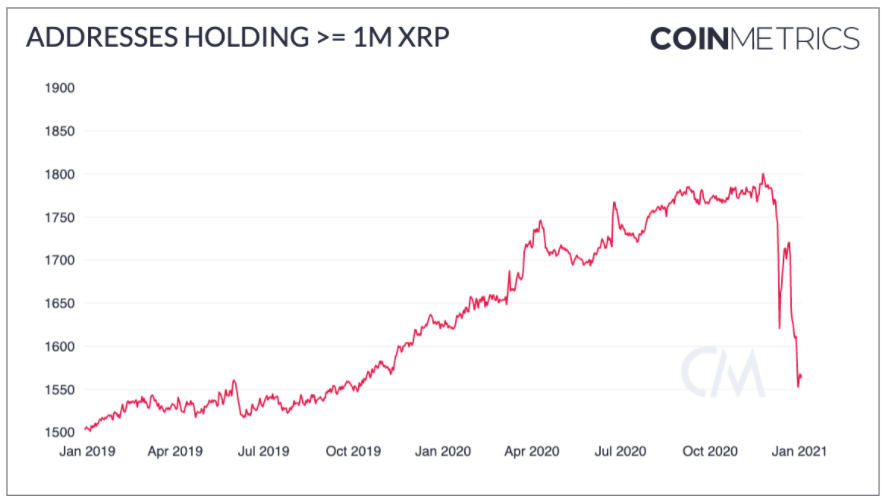 Holders of XRP have been rattled by the SEC’s accusations that Ripple violated regulations by selling $1.3 billion worth of unregistered securities. The lawsuit initiated by the securities regulator triggered a more than 70% drop in XRP price as exchanges and fund managers began to distance themselves from the project.

On Tuesday, Grayscale Investments announced that its Digital Large Cap Fund had been fully liquidated of its XRP holdings. Bitwise Asset Management removed XRP from its holdings before Christmas.

XRP is the only blemish on an otherwise rosy few weeks for the cryptocurrency market. Every coin in the top 15 crypto assets by market capitalization printed gains on Tuesday, with the exception of XRP, according to CoinMarketCap data.

What’s more, XRP is close to being overtaken by Litecoin (LTC) in the market cap rankings. As Cointelegraph previously reported, LTC briefly flipped XRP for the fourth spot over the weekend. At press time, XRP’s market value was only $140 million higher than Litecoin’s.

Ripple Slumps as Bulls Fail to Sustain the Recent Rallies

RG Coins exchange owner sentenced to 10 years in $5M laundering case
We and our partners use cookies on this site to improve our service, perform analytics, personalize advertising, measure advertising performance, and remember website preferences.Ok