Miami Mayor Francis Suarez reportedly wants to make the Magic City into the United States’ most attractive cryptocurrency industry hub. In an interview with Forbes, Suarez said that lawmakers in the city are “making sure that we have the most progressive crypto laws.”

“Every City in America and in the World Should Be Trying to Grow Its Technology Ecosystem.”

The city’s lawmakers are reportedly examining the policies of crypto-friendly areas like Wyoming and New York with the intention of creating regulations that are similarly supportive for the crypto and blockchain industry in Florida.

“We’re working on making sure that our incentives are in place and that our legislation promotes crypto and blockchain and is forward-thinking,” Suarez explained.

While Suarez hopes that the crypto industry will continue to grow in Miami specifically, he also said that “every city in America and in the world should be trying to grow its technology ecosystem,” Suarez said.

Suarez has become increasingly vocal with his support of blockchain and cryptocurrency in recent weeks. Earlier this month, Suarez said that city employees should have the right to be able to take their salaries in Bitcoin if they choose; he further suggested that Miami residents should be able to pay their municipal fees and taxes using Bitcoin and other cryptocurrencies. Suarez also proposed investing some of the city’s treasury into Bitcoin. 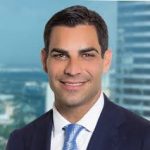 “We Want to Make Sure That There Is No City or State That Has More Favorable Laws and Regulations.”

His outspoken support of the crypto industry has not gone unnoticed. Suarez met with Gemini exchange Co-founders, Cameron and Tyler Winklevoss earlier this month, prompting the latter brother to say that Suarez is “leading the way for governments and Bitcoin.”

Additionally, the Bitcoin 2021 conference announced last week that it would be moving its location from Los Angeles to Miami. The conference is scheduled to take place in June.

Furthermore, Suarez told CoinDesk last week that “we’re excited to be a trend‑setting city at the forefront of crypto and blockchain technology.”

“We want to make sure that there is no city or state that has more favorable laws and regulations.”