It was created by Chinese national Justin Sun using the Ethereum blockchain. According to Sun, it is the shortcomings of Ethereum which have forced the move, and he clearly stated that he wants TRON to compete with Ethereum. 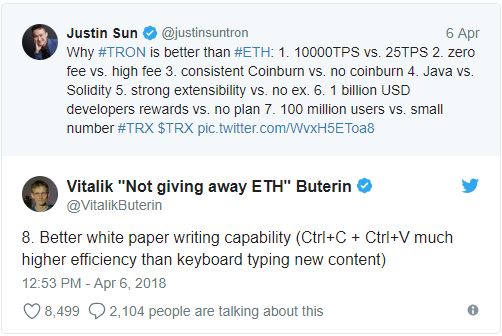 The time had come to move.

According to a press release, TRON will today be released on its own blockchain in open beta. Public testing will take place this month, and then TRON will “shed its ERC20 identity and become a true token within the TRON ecosystem.”

The genesis block will be laid on the 25th of June, a fateful date which the team is calling “Independence Day”.

TRON uses a proof of stake system with delegate nodes selected by voting – the first “Super Representative Election” will be held on the 26th of June. A list of candidates is available on its website. According to the press release: “The TRON Network is a basic-layer public blockchain that improves upon the Ethereum model by featuring a high-throughput, high-extension, and high-reliability support for the protocol’s decentralized application operations.”

TRON further claims that its delegate system is 400 times faster than Ethereum. I have discussed the pros and cons of this system in other articles, but seeing Ethereum mentioned so many times in the press release, one has to wonder what happened between Sun and Buterin…

The migration will be streamed live for those interested.