On Monday, Tether’s market cap hit $60 billion for the first time in history, marking another milestone of the stablecoin’s growth. According to data from Tether Transparency, USDT market value amounts to $60.4 billion at the time of writing, up over 580% from one year ago.

Tether’s new market cap record follows a series of newly minted USDT tokens at Tether Treasury. According to data from blockchain analytics service Whale Alert, at least 6 billion new Tether USDT tokens have been minted at the treasury over the past 30 days, with the latest batch of 1 billion USDT minted on May 24. According to an announcement by Tether, institutional and corporate demand is the main driver of Tether’s continued growth. 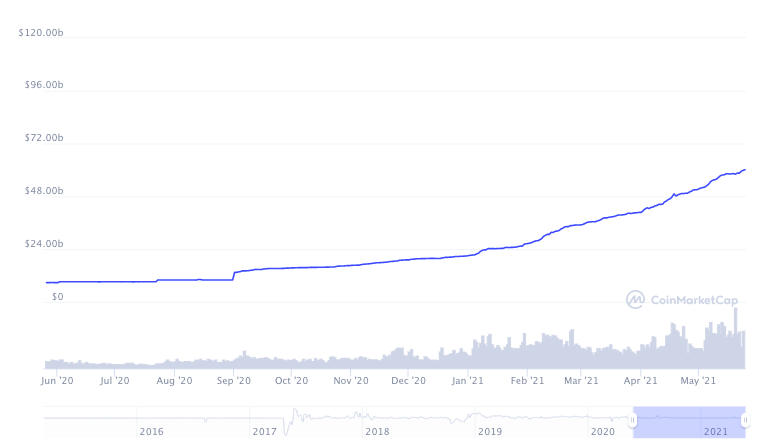 Tether broke into the top three cryptocurrencies by market cap alongside Bitcoin (BTC) and Ether (ETH) and has been gaining ground as the third biggest cryptocurrency by market cap over the past few days, flipping Binance Coin (BNB) on May 23.

Tether’s continued growth follows massive crypto volatility as the market shed $1 trillion from its mid-May high above $2.5 trillion. Bitcoin, which became a $1 trillion asset earlier this year, lost over $400 billion in the latest market crash, with its market cap sitting above $720 billion at the time of writing.

“During these extreme episodes, we’ve historically seen an uptick in stablecoin activity, made evident by Tether’s recent US$60 billion milestone as demand continues to grow. Events like these even support the ecosystem’s strength and help everyone refocus back to building rather than the distraction of token price gains.”

Founded in 2014, Tether USDT is a major stablecoin pegged at a 1:1 exchange ratio with the United States dollar. As the world’s largest stablecoin, Tether currently represents 60% of the $100 billion combined stablecoin capitalization, according to data from CoinGecko. USDT’s biggest rival, USD Coin (USDC), is ranked the eighth largest cryptocurrency by market value, with a market cap of $20 billion.