Snoop Dogg will perform at XRP Community Night, which will take place on 15th May 2018, during Blockchain Week NYC, according to the Ripple’s statement.

Ripple, the distributed ledger startup has made the announcement on 24th April 2018 via a blog post. The platform is organizing a VIP party and some of you may be among the 10 winners who will have the opportunity to enjoy the time with Ripple team and Snoop Dogg.

The event will be organized to celebrate the company’s success in improving the XRP system, but also its ledger technology.

“As special thanks to those who are building liquidity, validating transactions, developing on the XRP Ledger, looking to xRapid as a liquidity solution and sharing the good word about XRP’s many benefits, we’re hosting a special night.”

Get the change to take part in the VIP Night

For those who want to take part in the VIP event, Ripple offers 10 tickets if you meet the following requirements:

“To win a ticket to XRP Community night, we invite you to participate in two @Ripple contests this month.

We ask that you carefully read and follow the rules for each contest to be eligible to win.”

The team recalls that the event is private, so tickets can’t be purchased individually, while guests will enter according to the list. More information about the contest can be found on Ripple’s website.

As a summary, eight users will get the chance to win free tickets through the Trivia Night event, according to the post. These are required to answer correctly at the questions posted by the company at 4 PM Pacific Time on 26th April 2018. The winners will be announced on 27th April 2018.

As for the second event, users will have to design a caption on Twitter using images published on 2nd May by Ripple. The winners will be publicly revealed on 4th May 2018.

It seems that rapper Snoop Dogg is not in his first involvement in crypto activities. He made a post on Twitter in January, sharing with fans about the new services offered by Robinhood. 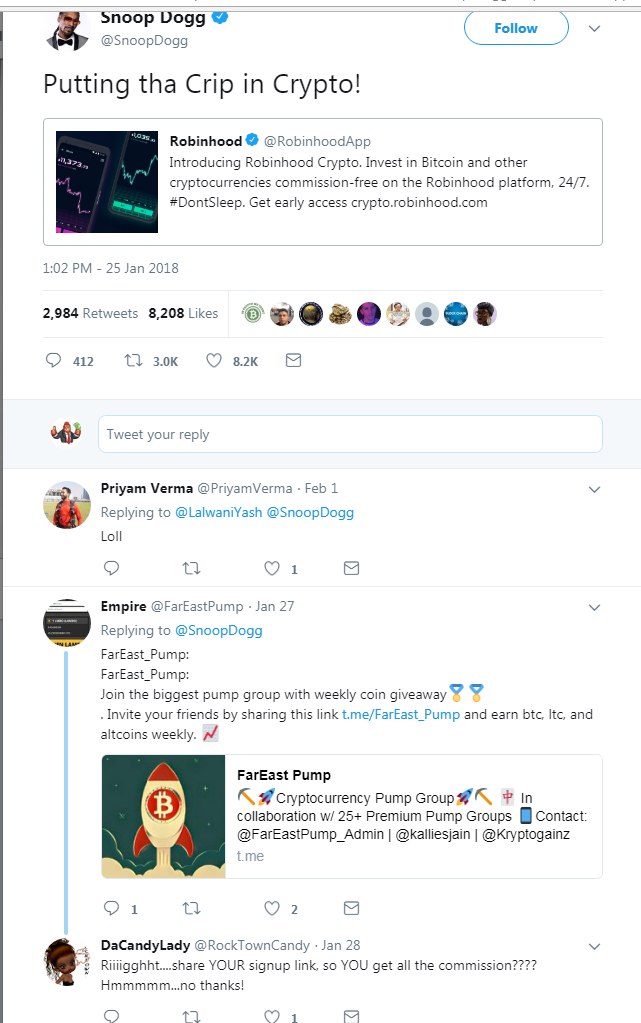 Also, the rapper has performed at several crypto-based parties.