Boxing legend Mike Tyson has dropped a series of tokenized collectibles on the heavyweight champion platform of the NFT world, OpenSea.

The 55-year-old collaborated with digital artist Cory Van Lew to launch the “Mike Tyson NFT Collection,” which consists of 11 one-of-one NFTs up for auction, and six open edition NFTs that range from 50 to 250 copies.

The collection was released earlier today. The NFTs depict neon-colored illustrations of iconic moments from Tyson’s career such as knockouts, championship wins and the notorious “ear-biting” escapade. 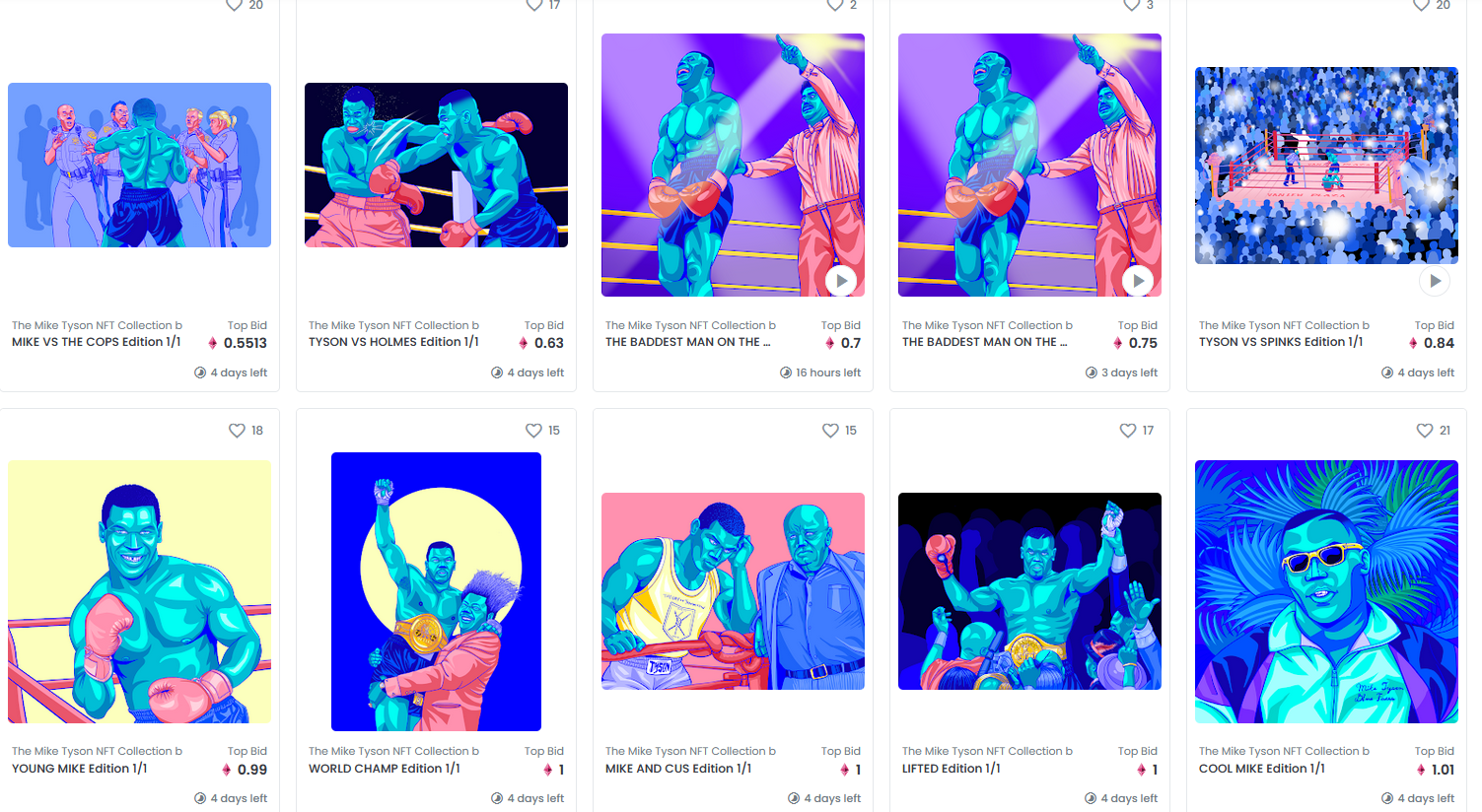 At the time of writing, there are three one-of-one editions with a top bid of 5 ETH each worth around $16,000, however, the prices are likely to climb fast as the auction doesn’t close until Aug. 24. Tyson also stated on Twitter that the buy now editions all sold out within an hour of launch.

Tyson’s NFT collection was produced by 1ofOne, an NFT creative agency that tailors to A-list celebrities and global brands.

In what could either be a great or bad idea, Australian TV show “The Rebound” which screens on the Nine Network, is auctioning off a tokenized episode that will see the winning bidder become part of the show next season.

Episode 8 of The Rebound explores crypto-economics, and has been minted in NFT format on Rarible. The NFT was minted yeterday is up for auction now, with bidding set to close in six days, however, there are no current bids at the time of writing.

Along with becoming a regular guest on season three of the show, the winning bidder will also be mentored “in their business or career” as part of the shows’ accelerator program. “This NFT may be your ticket to a new financial trajectory, and maybe even TV stardom!” the description reads.

The drop is dubbed “The Messiverse” and is set to go live on the Ethernity marketplace tomorrow, which is a platform that produces and sells licensed NFTs.

The art depicted in the NFTs was designed by Australian artist Bosslogic, and the drop includes a special edition of 50 copies priced at $10,000 each, a limited edition of 2500 copies at $499 each, and an open edition worth $50 per copy.

The artwork of the $10,000 “Man of Tomorrow” NFT displays a futuristic and bionic-looking portrait of Messi, with a cyberpunk style background. Owners of this special edition NFT will receive an extra unspecified “one-of-a-kind” NFT following the drop.

Dom Hofmann, co-founder of the now-defunct social media app Vine is working on a new NFT gaming project called “Supdrive.” In the Supdrive discord channel, Hofmann described the project as “an on-chain fantasy console game where the games themselves are NFTs.”

“You can think of it sort of like Artblocks for games. These games all run on the Supdrive Virtual Firmware, a toolkit that allows games to be written in the concise instructions that are gas-friendly and ideal for on-chain storage,” he wrote.

The Vine co-founder revealed that the first game is called “Origin” and that games developed by the project will have an “old-school arcade-style” similar to Pacman and Asteroid. He hasn’t specified what blockchain he is building on at this stage.

“As the firmware is upgraded, games will gradually become more sophisticated. Perhaps one day we’ll have Super Supdrive or Supdrive 64,” he said.

Cointelegraph reported on Aug. 20 that Crypto.com partnered with Italy’s top soccer league, Lega Serie A. The partnership will see Crypto.com’s branding featured during game broadcasts, and the exchange will also launch some new Lega Serie A NFTs.