The Indian police arrested two culprits who are charged for the theft of 300 Bitcoin worth $ 2.6 million. The incident was attributed to 5,000 victims.

The two culprits were caught carrying a Ponzi scheme disguised under a Multi-Level-Marketing (MLM) strategy. They were able to lure investors who were to become part of their MLM scheme. The scheme pretends that those involved were somehow forced to bring new members, who were forced in their turn to bring as well new members into the game. Thus, the two culprits were collecting crypto funds from an investor to pay another investor.

The promise that the two were doing was closely related to the high remuneration in Bitcoin. In order not to be found guilty, the culprits operated under the company Bitmineplus.

According to The Times of India, Bitmineplus started its activity in December 2016, promising 12% returns to those who accept the challenge.

“Their basic idea was to kick-start a multilevel marketing scheme involving bitcoins. The people were given monthly payouts and additional income for referring the scheme to more people,” stated an investigating representative. 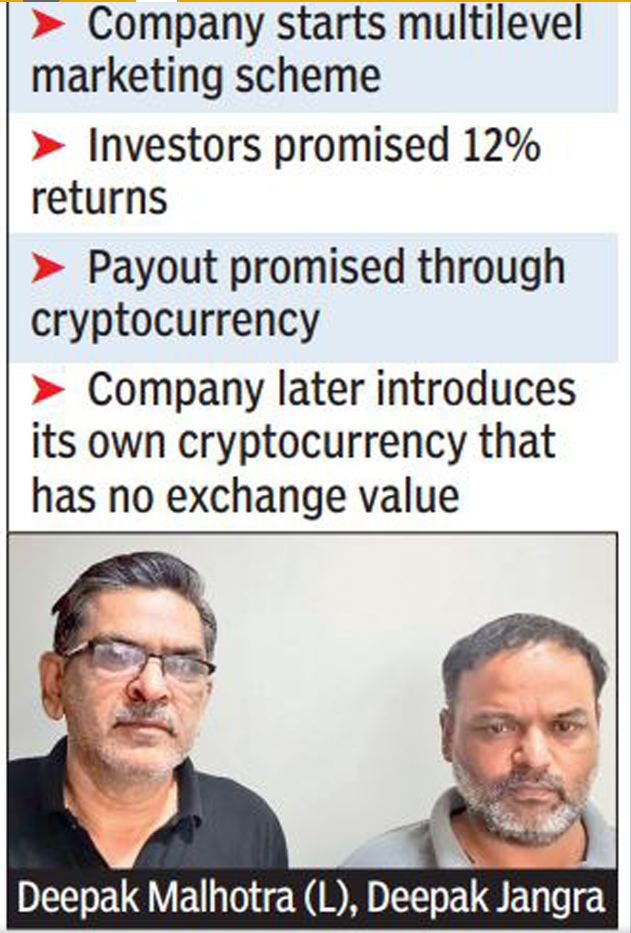 Source: The Times of India

Initially, the entrepreneurs were returning the promised funds according to their obligations. Subsequently, they created their own crypto coin, called BMP, which was devoid of value. Recently, the two culprits were captured by Indian authorities fleeing with investors’ money.

“Jangra [the mastermind behind the ponzi] had planned to shift his investors to his own cryptocurrency after getting a good sum of investment, but rising debt and the daily pressure from his investors made him flee with the money,” stated the police.

The two managed to evade funds from 5,000 victims during one year, according to The Hindu. “We have identified at least 5,000 IDs which have been duped. For the first few months, the income came in but eventually, it stopped after which the investors started to ask questions,” revealed the Deputy Commissioner of Police Anyesh Roy.

Unfortunately, digital crimes continue to exist both in Asian countries and beyond. There is a need for a strict penalty system for such cases.