After several months of the doldrums, Bitcoin Cash (BCH) seems like it’s on it’s way back up. A week ago, on April 18th, the price of a single BCH token was worth about $770. At press time, the value of a single BCH token was $1293, a nearly 40 percent increase, despite the fact that it had fallen 16 percent from its high of roughly $1560 yesterday. BCH’s trading volume has also softly echoed its price movement

Despite this rise in valuation, BCH is still a far cry from its December heights of roughly $3,650. At the time, BCH fans were pushing for a “flippening” (for Bitcoin Cash to essentially “replace” Bitcoin). Now, Bitcoin is up to $9,272, and there isn’t much talk of replacing the BTC network at all.

The Upcoming Fork is Driving the Price of BCH Back Up

Indeed, the BCH community doesn’t seem to be pushing for major revolution; instead, Bitcoin Cash seems to have focused its efforts on becoming a network well-suited to everyday payments (something the Bitcoin network is not well-suited for.) 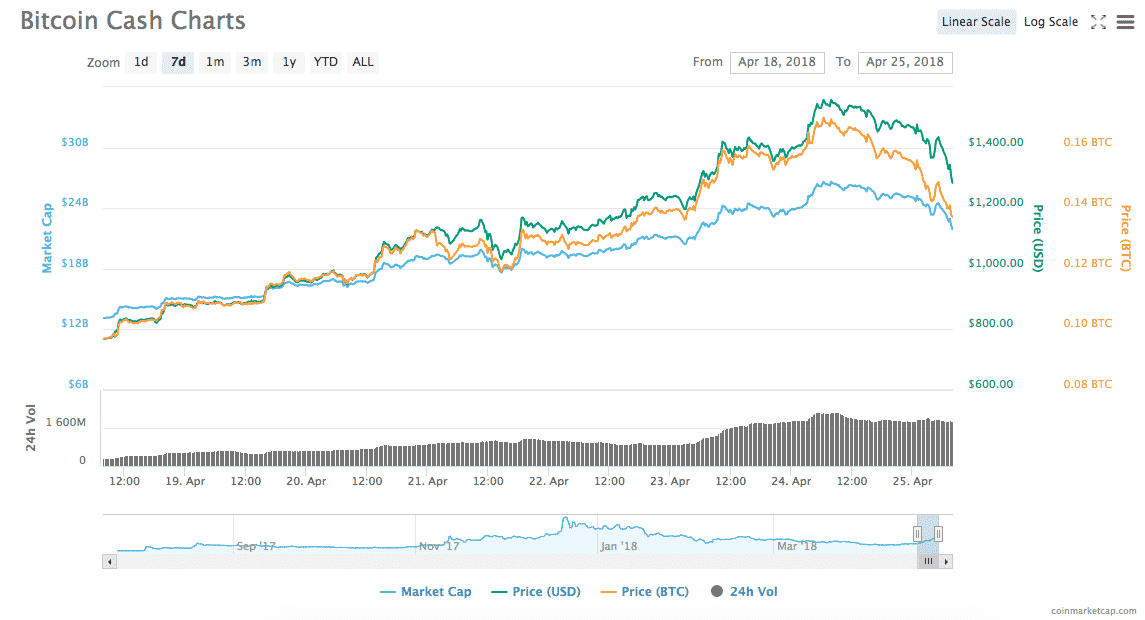 There are several reasons to point to when it comes to figuring out the cause of the recent rise in valuation. Some sources have cited South Korean trading; others point to signs of a larger market recovery. One factor that could uniquely be driving up the value of BCH is the upcoming hard fork that’s scheduled for the network on May 15.

A “hard fork” is a sort of software update to a crypto network that results in the creation of an entirely new blockchain network (and a new cryptocurrency to go along with it.)

Anyone who holds any amount of a coin that goes through a hard fork is entitled to receive a corresponding amount of the new coin. Therefore, any cryptocurrency that will experience a hard fork generally tends to see upward price movement in the days and weeks leading up to it.

For example, when the Bitcoin network forked to create Bitcoin Cash itself, the price of BTC rose roughly 10 percent within two days. 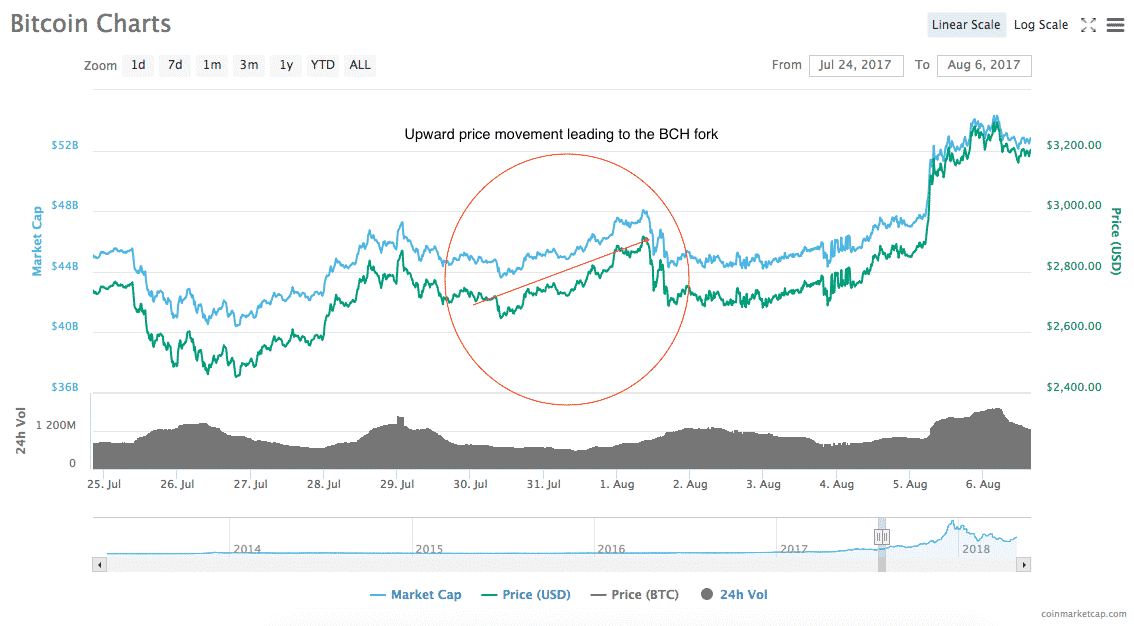 The May fork is the result of a meeting of seven Bitcoin Cash developers that took place in London in November of 2017. The group, which is also known as Bitcoin ABC, said that functionality was their top priority for the BCH network.

A statement released by the group following the meeting reads: “our top priority for Bitcoin Cash is to keep improving it as a great form of money. We want to make it more reliable, more scalable, with low fees and ready for rapid growth. It should ‘just work,’ without complications or hassles. It should be ready for global adoption by mainstream users, and provide a solid foundation that businesses can rely on.”

When Bitcoin Cash was created, it was intended as a “better” alternative to the Bitcoin network. The main issue that BCH was intended to improve was scalability (which, by the way, is still a big problem for Bitcoin.)

The larger block size also means that transactions on the Bitcoin Cash network are also generally less expensive, especially in times of high network traffic on the Bitcoin network.

The Fork Could Establish Tokens on the BCH Network

According to a report from Stocks Gazette, the upcoming hard fork will reactivate some pieces of the original Bitcoin code that have lain dormant for quite some time. These include an opcode known as ‘OP_GROUP’ that could be used to establish tokens on the BCH network (similar to the way that ERC20 tokens function on the Ethereum network.)

If the implementation of OP_GROUP is successful, and a system for establishing tokens on Bitcoin Cash is created, the network could see a massive increase in value throughout Q2. According to AMB crypto, some of the other opcodes will lay the foundation for creating smart contracts.

The fork will also increase the upper turn size from 40 bytes to 220 bytes, a move that will allow users to add more data to the blockchain. This facilitates the creation of “colored coins” and using the blockchain to time-stamp data.

Bitcoin Cash underwent its first hard fork in fall of 2017 to improve problems with estimating mining difficulty (‘mining’ is the process by which computers on the BCH network confirm transactions.)

The Bitcoin Cash network has been the subject of much controversy and bad publicity since its inception, a fact that many in the crypto community believe to have been holding the network back.

It all started in mid-November, when Bitcoin Cash briefly spiked up to $2500 before crashing to nearly $1000 within 48 hours. Before the crash, former “Bitcoin Evangelist” Roger Ver and Bitcoin Developer Gavin Andresen were singing the praises of BCH over Twitter; after the crash, some voices in the crypto community suspected a massive pump-and-dump scheme. 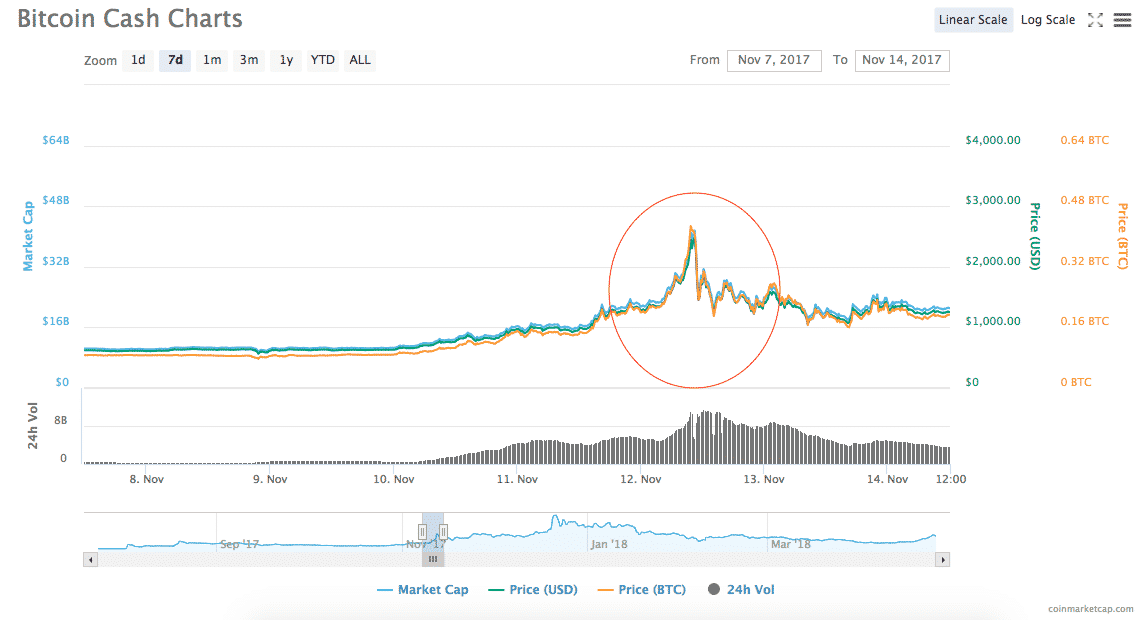 Bitcoin Cash was hit with another publicity blow when Coinbase suspended the trading of BCH on its platform because of allegations of insider trading within the company.

Now, Bitcoin Cash has been associated with yet another suspected pump-and-dump. TheNextWeb reported that Antpool, a subsidiary of Bitmain, has been accused of artificially boosting the value of BCH.

Antpool announced on Friday that it has recently begun “burning” 12 percent of all BCH mining rewards. The reasons given for the practice were (essentially) that Antpool wants to strengthen the BCH network. A statement from the company reads:

“While having active users spending BCH is very important for the ecosystem, having investors who hold BCH is also a fundamental requirement for maintaining a strong economy. Without these holders, BCH’s exchange value loses significant support. We believe that they too should profit from the growth of BCH by their continued stake in the Bitcoin Cash ecosystem. The transaction fees earned by miners are an important growth indicator of the BCH ecosystem, and if a portion of the fees are burnt, it is effectively miners sharing revenue with the entire BCH network.

Members of the crypto community without strong ties to Bitcoin Cash are seeing the announcement as a way to manipulate the BCH market.

While the future of Bitcoin Cash may not be as clear as many of its supporters want it to be, it’s clear that the team of developers behind the network believe in their project, and are working hard to ensure its success.

BCH remains in its position as the most successful coin forked from the Bitcoin network yet.