The cryptocurrency market is among the biggest unregulated sectors in the globe. Before the coming of digital money, drug dealers were using cash as the main means of making transactions. Now, things have changed a little bit. However, drug dealers still prefer using fiat than cryptocurrencies.

Criminals can make payments using digital currencies such as Monero, Dash, Bitcoin (BTC), Zcash and others, on darknet or peer-to-peer platforms and the narcotic products purchased can be delivered to them wherever they are located using illegal channels of course.

The effects that drug markets have on the community are concurrently huge and exceed the damages triggered by drug use. Some of the impacts of using drugs include participating in other forms of illicit operations and terrorism, drug-linked deaths plus social costs, corruption of government agencies, etc.

Amount of crypto and fiat spent on narcotics

Currently, there are more than 100 million active consumers using a digital currency wallet of which most of these unique consumers use Bitcoin. It is estimated that about one-quarter (25%) of people are using BTC for illegal transactions involved in drug trading.

Over $75 billion of unlawful activity annually involved in BTC, the original cryptocurrency, and this figure is almost equal to the scale of the European Union (EU) and United States market for narcotic products. Some of the drug markets in the EU include cannabis worth EUR 15 billion mostly being trafficked from Morocco, heroin market worth EUR 9 bln, opium mostly trafficked from Afghanistan, Cocaine worth EUR 9 billion from mostly Colombia, Brazil and Venezuela. 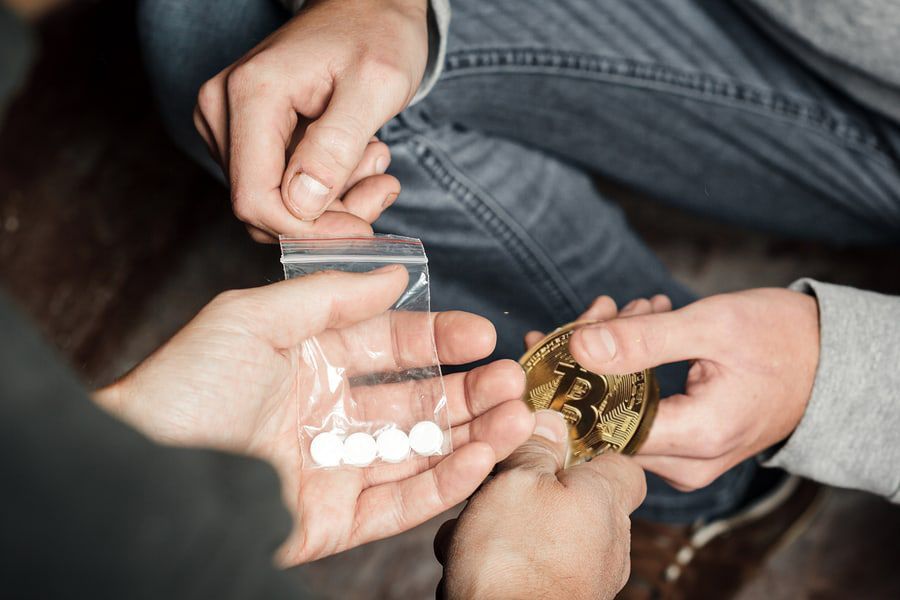 The drug market is one of the lucrative spaces for organized crime groups (OCGs), and according to the data by the European Monitoring Centre for Drugs and Drug Addiction, the EU inhabitants spend more than 31 to 40 billion annually on prohibited drugs. However, the share of cryptocurrency as payment is also relatively small here.

With the strengthening of regulations, cryptocurrency becomes a less easy way to conceal illegal transactions. For this reason, drug dealers tend to turn to privacy coins due to their enhanced anonymity. Nevertheless, fiat money remains the number one choice in this industry as well despite numerous speculations about criminal involvement of cryptos.

As per the report by CoinIdol, a world blockchain outlet, other criminal industries like money laundering also prefer fiat money to cryptocurrency, meaning that the letter is far less criminal than the money people are used to.