Trading volume surged by as much as 500% while prices pumped by up to 40%. After opening the week at $0.60, the digital asset hit a daily high of $0.90. It further successfully climbed from 7th place to 4th overtaking Cardano, USDT, and Polkadot. 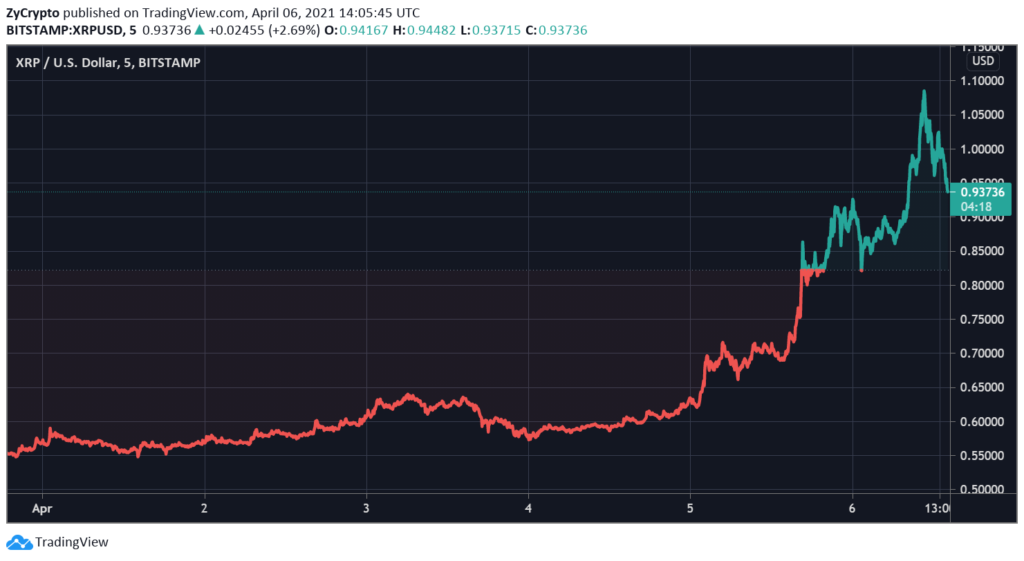 Previously dismissed by some investors following its woes with the SEC, Ripple’s XRP is gradually making a comeback. Court developments so far indicate XRP is edging ahead. As such, XRP has been making a recovery.

In fact, at current prices, XRP is worth more than when the case was first presented by the SEC. Since the turn of the year, XRP is up by 170%. Of course, the situation remains fragile and a single development could see it crash.

As the court developments have looked encouraging, there has been a call, better yet a movement, created by XRP traders to have exchanges relist XRP. An army of XRP traders has been vocal on social media calling for US-based exchanges to relist XRP.

XRP’s surge is a further indication of a changing trend. Performance from last week has suggested that investors might be preferring altcoins to Bitcoin. Since failing to stay above the $60K price level, Bitcoin’s dominance has been tumbling. At the same time, top altcoins have been performing exceptionally.

These performances have seen the total market capitalization cross over $2 trillion for the first time. If XRP continues moving with the same vigor, it’s not only going to hit the paramount target of $1 but it is destined to set sight on a new all-time high.

Bitcoin’s dominance currently stands at 55.2%. Analysts predict that if it falls below 50%, the market could experience a repeat of the 2018 altseason.