Given the fact that it’s been around for a while now, it’s surprising that Ark isn’t on more people’s radar. Ark is a leading crypto project that’s hot on the trail of blockchain’s Holy Grail, interoperability.

Nestled quietly at number 59 (by market cap) on the top cryptocurrencies list, Ark is – and I don’t put this lightly – one of the most ambitious projects out there. Ark is an all-in-one blockchain platform that, to quote their official website, “aims to create an entire ecosystem of linked chains and a virtual spider web of endless use cases that make ARK highly flexible, adaptable, and scalable.”

While Bitcoin, Ethereum, Litecoin, etc. are the usual first stops for any new crypto investor, the fun really starts when you branch off from the more “popular” coins. This is the true bleeding edge. It’s more interesting here because bargain prices can still be found, and it’s also where some of the most aggressive stabs toward the vision of Web 3.0 are being made. In the current landscape, I see Ark as one of the most likely to take the decentralized baton and power through the next lap.

In my view, Ark is shaping up to be one of the soundest solutions for blockchain interoperability in the space. Below I’ll lay out 5 aspects of the project that make me bullish on Ark’s future prospects.

Note: This is just an opinion. It is not meant to be financial advice and there is no substitute for doing your own research.

(Side note, many Bitcoin advocates will argue that the energy needs of Bitcoin catalyze more renewable energy sources. However, as circumstances have already shown, what’s more likely is that the energy demands of mining Bitcoin will create an incentive for more decommissioned coal plants to reopen.)

Instead of burning energy like there’s no tomorrow, Ark has taken a different path: one on which its holders vote for delegates, and it’s up to the top 51 delegates to validate blockchain transactions and maintain the blockchain. DPoS can be thought of as a representative democracy, with individual participants using their holdings in order to nominate delegates who then make decisions for the group. These delegates confirm blocks and receive rewards in the form of transaction fees and Ark payouts.

The DPoS protocol is arguably a much better alternative to Bitcoin or Ethereum’s Proof-of-Work protocol in terms of efficiency and scalability. While Ethereum has slowly been moving towards a PoS protocol, Ark has already accomplished this. DPoS is also commonly said to help maintain the critical element of decentralization, and any blockchain that’s embracing an alternative, progressive consensus mechanism gets a positive check in my book.

Ark’s use case is undeniably useful and simple to understand. Instead of competing with the likes of Ethereum and NEO to be the back-end of back-ends, Ark is positioning itself to be the glue that connects everything. Marketer Jeremy Epstein was recently announced as an Ark advisor, and he wrote an article outlining why he’s so excited about Ark. In it, he uses the scenario of Starbucks purchasing coffee from a supplier in South America as an illustration of Ark’s utility.

In this example, there are numerous blockchains that could potentially be involved in the coffee buying process. A blockchain for a privacy token to issue payment to the South American vendor, Ethereum to execute the smart contract between buyer and seller, a supply chain blockchain system that tracks the product with RFID tags, and perhaps another blockchain if the shipping and trucking companies use different systems.

This can end up involving many different currencies and chains – in short, a total jumble. Ark is building the capability to streamline this entire process down to a manageable level. It’s often said that Ark doesn’t have competition, only future partners – and in light of this example that statement starts to make sense.

By owning Ark you can easily interact (theoretically) with any blockchain. As the blockchain economy grows, so will the number of utility tokens and the convolution of smart contracts. Something like Ark is going to be a necessity to avoid holding 20 tokens while still having the ability to access the full functionality of blockchain tech. 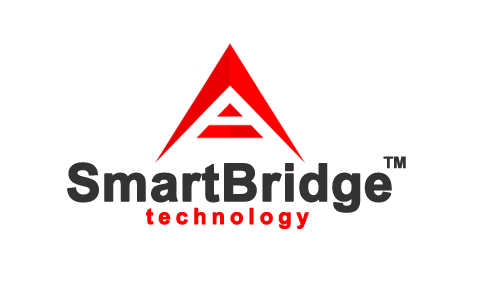 The above use case example is largely powered by “SmartBridges” that only need a bit of code to be embedded into an existing blockchain to function. But what happens if a blockchain doesn’t input the code? Does this mean it’s off limits? No, and this is where encoded listeners come in.

Encoded listeners are nodes that function as extension cords between different blockchains. The encoded listener “listens” for compatible orders being sent and works as a relayer. Encoded listeners have a small reserve of tokens and complete the needed conversion or action for a small fee. This presents an opportunity for users to be rewarded and help the network at the same time. Win–win.

Anyone who wants to act as a medium to help the network can. This is an innovative idea, and although I may not understand encoded listeners on a deeply technical level, it’s not hard to recognize their utility in the broad sense. The first encoded listener was developed by ACES (Ark Contract Execution Services) and enabled Ark holders to use Ethereum smart contracts. A similar listener for Bitcoin was not far behind it. Ultimately, the idea is that encoded listeners will become more widely available, allowing users to interact with a range of blockchains.

If you’d like to explore things further, co-founder Mike Doty was recently interviewed by the CryptoLark. It’s an interesting conversation, and it digs deeper into Ark’s use case and technology.

Push-button blockchain deployment is another feature of Ark’s that I believe will set them apart. Push-button blockchains are Ark’s answer to ERC20 tokens, the key difference being that these are separate chains – not more weight for the main blockchain to support. This could be tremendously important in terms of scaling.

Once live, this feature will make Ark “clone-able” with one click (and linked to Ark’s main chain, hence already SmartBridge-enabled). This makes it so that anyone, even someone without a technical background, can deploy a blockchain simply and quickly. All of this potentially allows for huge growth (not to mention it drives adoption through ease of use) while simultaneously allowing the Ark blockchain to continue running cheaply and efficiently.

According to the above-cited Jeremy Epstein:

Scaling is an exasperating problem for just about every blockchain project out there, and to know that Ark has a solid plan in place is reassuring.

The Ark roadmap lists push-button blockchain deployment as 61% complete. Once finished, this could be one of the defining characteristics of Ark.

One criterion you should always consider when researching an investment is the people surrounding the project. Obviously, that starts with the development team. Ark’s is headed up by a group of ex-Liskers who’ve built a smart, dedicated, and passionate team. The Ark team has developed a reputation for transparency and execution, they’re active on social media and GitHub, and they appear to be ahead of schedule (a true rarity in crypto).

But there’s also the community to consider. Here are a series of semi-rhetorical questions that can help you feel a community out: How big are their numbers? How engaged are they? Are the project’s supporters passionate? Are people hung up on price or is there a strong focus on progress and understanding the technology? How does the community treat newcomers?

My observation has been that the Ark community passes these tests with flying colors. Ark has a dedicated tribe of followers that are active on Reddit, Telegram, and Slack. Despite its biblical sounding name, the Ark community has managed to be a real presence without falling into the partisanship trap, giving off a culty vibe, or being overly zealous. The Ark community exemplifies some of the best elements of cryptocurrency culture, and, in my view, this is another positive indicator of where the project is heading.

The Future Is Bright For Ark

There are quite a few more reasons to be psyched about Ark than those I’ve mentioned here.

The Ark wallet gets rave reviews in terms of its functionality and usability. Ark has established a cooperative society, referred to as SCIC, in France. This is the first of its kind in the EU and will give them a huge credibility boost.

Ark will ultimately offer support for up to 18 coding languages, so developers won’t be hamstrung by things like Solidity. Ark is also building an “Interplanetary File System & Database” that will (once complete) have the potential to compete with the likes of Civic and Dropbox. In sum, there are numerous exciting developments on the horizon.

But does all of the above make the Ark token itself a good investment? In my opinion, it does. But this statement must be viewed only after a number of caveats have been made.

First, Ark isn’t without challenges. Ark has limited uses at this (early-stage) time; what they’re doing is highly ambitious, and it’s uncertain if they’ll truly deliver. It’s also unclear precisely what role the token will play and what it’s value will be going forward.

Due to the ambitious nature of what Ark is attempting, it’s hard to come up with comparisons by which to analyze the price (both current and future). Ark will likely be used as an intermediary fee that will grease transactions in the future ecosystem, but the specifics of this fee have yet to be spelled out. Ark could also use a bit of work in the marketing department, as their brand presence leaves something to be desired.

All that said, if Ark manages to get anywhere close to their vision of being the “go to” solution for blockchain applications, it’s safe to assume the token value will increase significantly. During the heady days of January 2018, Ark’s price crested close to $10. It now sits at the comparatively low rate of $3.50 (at the time of writing). 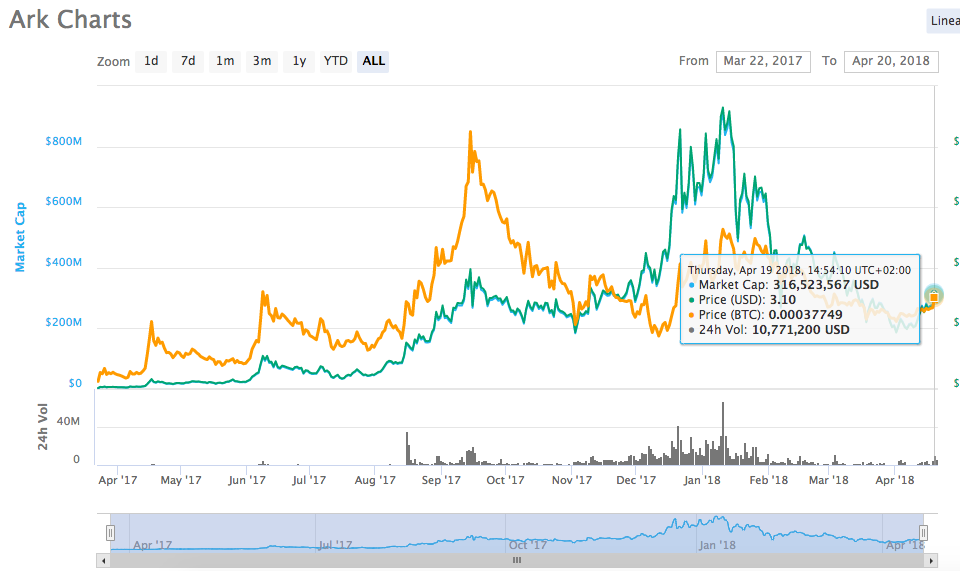 The current supply of Ark sits at 102,013,282 and it has a low inflation rate that is set to decrease over time. In fact, its inflation rate is, quite attractively, lower than Ethereum’s.

Serious people will quickly tire of “moon this, moon that” type of talk, but in Ark’s case, these sentiments may not be unfounded. Ark scores well across a number of investment criteria, making it a solid addition to any crypto portfolio.