It’s been a spectacular week for the Cointelegraph Markets Pro VORTECS(TM) Score, which alerted subscribers to several of the top crypto asset price movers hours before the price began to climb.

Dogecoin (DOGE) has been the standout performer of the week, confounding analysts who look for fundamental strengths in an asset — the meme coin may not have much of a team, or a genuine use-case, but it has Elon Musk, Mark Cuban… and the support of their millions of fans.

Dogecoin crossed the 80 VORTECS(TM) line on the morning of April 13, when the price curve was still flat at around $0.073 (first red circle). Apparently, the model has recognized a familiar confluence of celebrity tweets and rising trading volume. Closer to the early hours of April 14, the price line followed suit, pumping all the way to $0.141 (first two red boxes in the graph).

And just as expected, after a rapid climb VORTECS(TM) anticipated a price decline (second red circle), as has happened many times in the recent past with Dogecoin. Although it was not particularly dramatic, a correction to $0.110 followed in several hours (third red box).

While the 7-day graph above, captured on April 15, demonstrates the VORTECS(TM) Score operating exactly as hoped, a later capture on April 17 (below) illustrates the limitations of any dynamic modeling algorithm entering unfamiliar territory.

The VORTECS(TM) Score includes sentiment analysis, tweet and trading volume, and price action as components of the algorithm — which are then weighted according to a proprietary formula based on how similar these are to historical conditions. If there is a similarity in these factors, the score will be higher when historical precedents have most consistently led to higher prices.

But with DOGE this week, there are almost no parallels in history — after breaking all-time highs, the coin just kept climbing. Since VORTECS(TM) was unable to see historic similarities to this rapid ascent, it stayed fairly neutral after the initial wave of buying (orange box).

Ripple’s XRP cryptocurrency continued its glorious comeback this week after a series of mild setbacks for the Securities and Exchange Commission in their case against the company, making it to the Top Performers section of the second consecutive VORTECS(TM) report. On April 12, it entered a streak of dark green VORTECS(TM) scores at around $1.37. Some 12 hours later, it took off to eventually reach $1.93 (first and second red boxes).

THORChain recorded a series of high VORTECS(TM) values during downward price movement toward a low point of $10.67. Roughly 26 hours later, the price began climbing toward the subsequent high point of $16.46, a 54% improvement compared to the moment when the first dark green score was detected.

The April 13 announcement of a Binance staking promo featuring IOStoken carried the asset to a 53% price increase over 24 hours. Note how there are actually two NewsQuake(TM) symbols on the token’s VORTECS(TM) graph sitting close to each other. This is not a glitch: Although the substance of the news is nearly identical, one represents a Medium post by IOS Foundation, while the other marks a tweet from Binance’s official account.

In a game where minutes can make a difference, Markets Pro strives to deliver actionable news as soon as it becomes available. NewsQuakes(TM) are sourced from a real-time aggregation engine, collated from over a thousand primary sources every minute and analyzed by an AI algorithm to determine the historical significance of the news. NewsQuakes(TM) are trained on staking announcements, exchange listings and key partnerships, and because they are delivered without human intervention, they can often be the fastest way for market participants to learn about major events in the cryptocurrency space.

These strategies are based on time-based or score-based exits. For example, the current top-performing strategy since testing began is the Buy 90 / Exit after 168 hour strategy, which measures the price of an asset the moment its VORTECS(TM) Score crosses the 90 threshold, and then again exactly 168 hours from that initial measurement. The difference is the return on investment (ROI) that is recorded.

That strategy has delivered a ROI of 1,837% since January 5, which compares favorably to holding Bitcoin (87% ROI) or holding an equally-weighted basket of altcoins (470% ROI) over the same time period.

However, all strategies have blips — this week, strategies based on entrance points of 90 underperformed those with entry points of 80, illustrating that even the most advanced algorithms can pick a few duds from time to time. 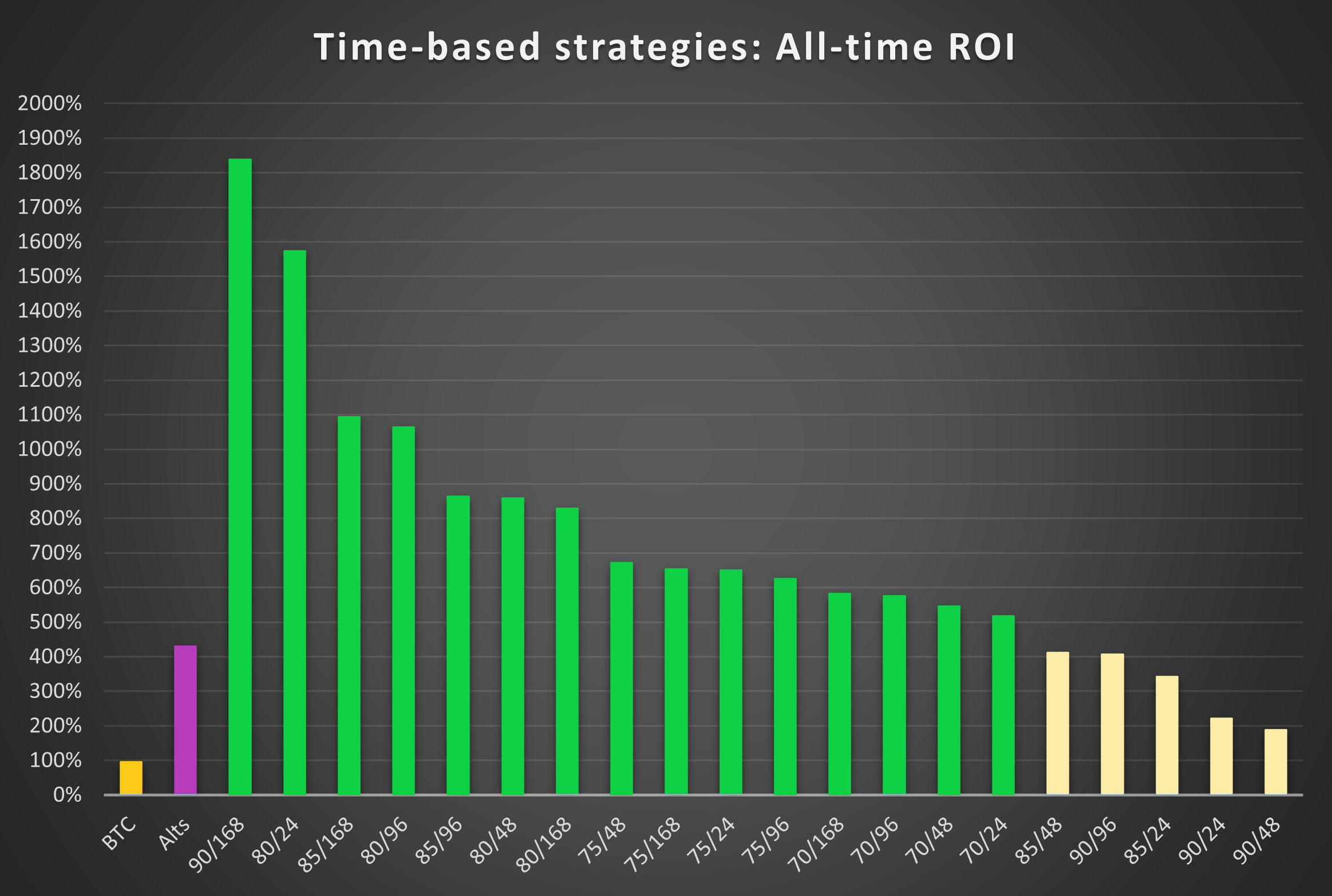 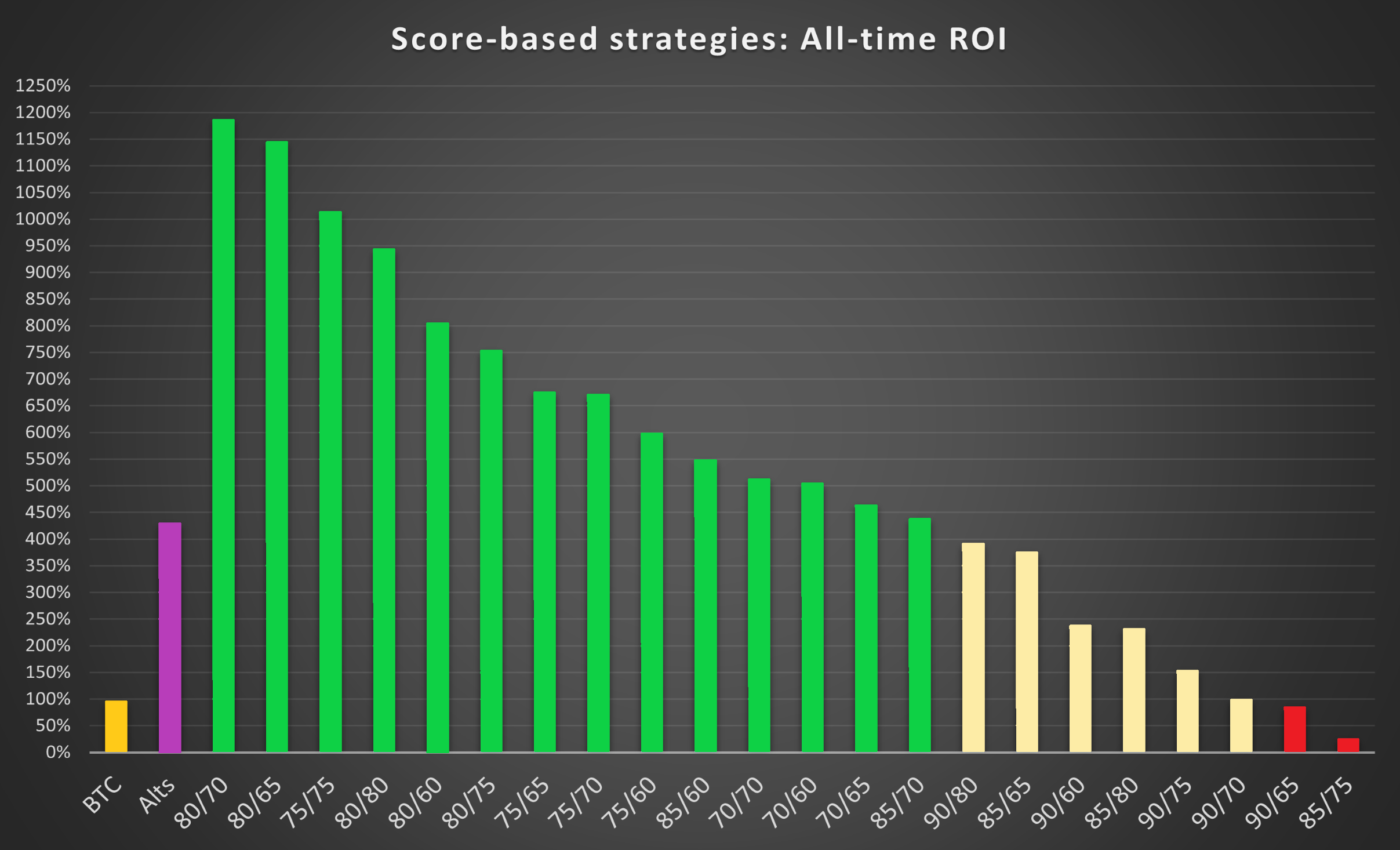 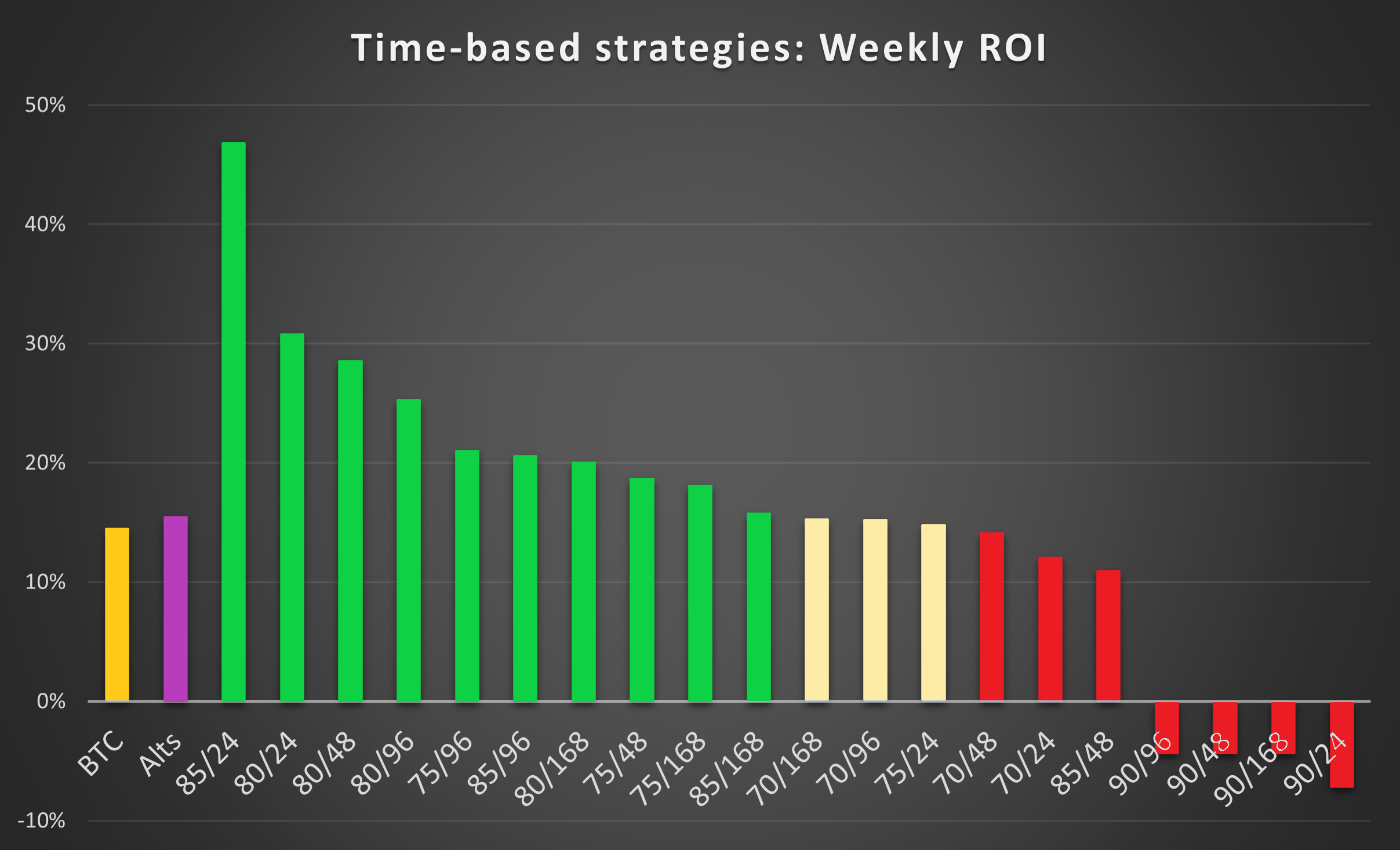 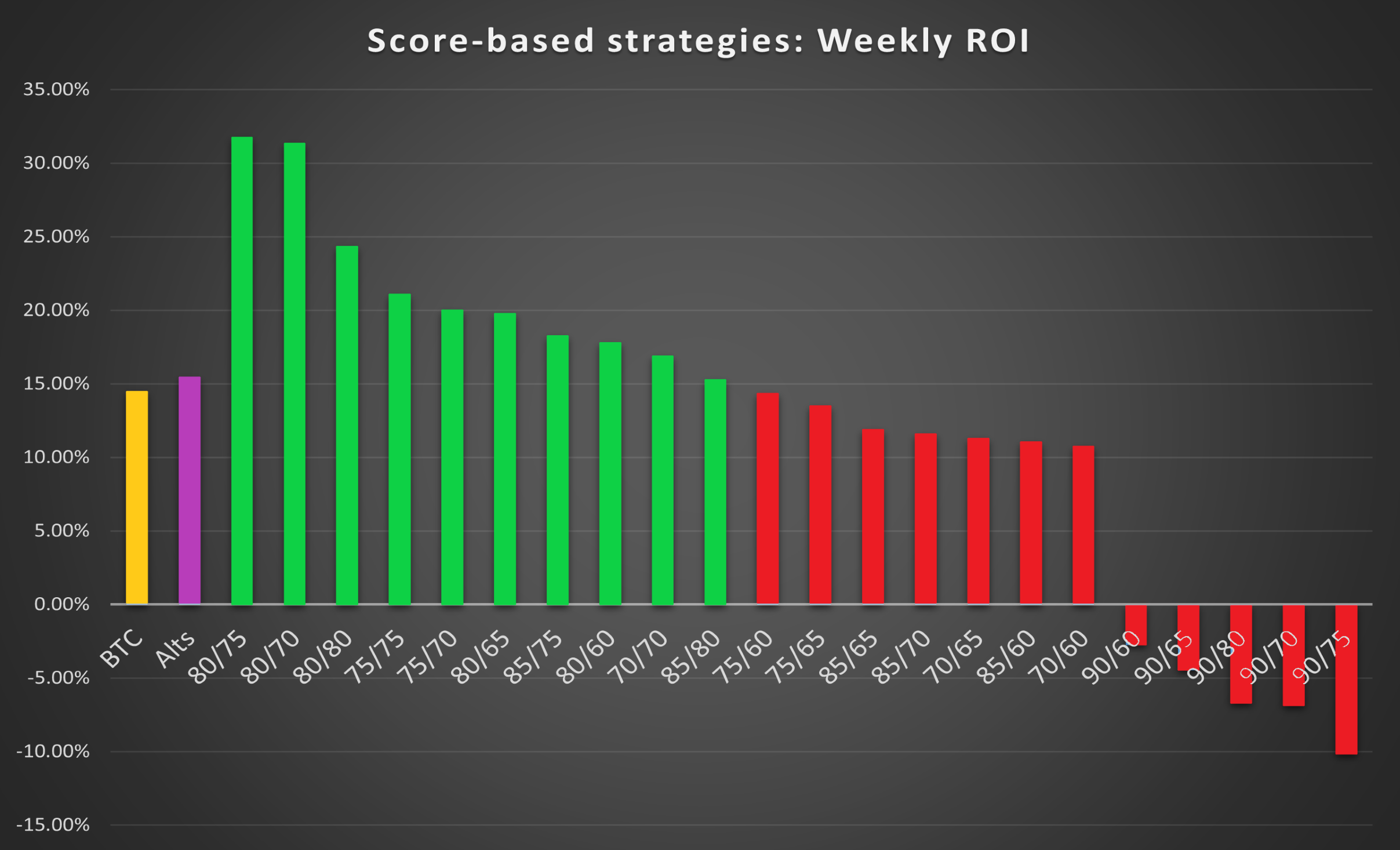 Cointelegraph Markets Pro is available exclusively to subscribers on a monthly basis at $99 per month, or annually with two free months included. It carries a 14-day money-back policy, to ensure that it fits the crypto trading and investing research needs of subscribers, and members can cancel anytime.

Cointelegraph is a publisher of financial information, not an investment adviser. We do not provide personalized or individualized investment advice. Cryptocurrencies are volatile investments and carry significant risk including the risk of permanent and total loss. Past performance is not indicative of future results. Figures and charts are correct at the time of writing or as otherwise specified. Live-tested strategies are not recommendations. Consult your financial advisor before making financial decisions. Full terms and conditions.