Solana (SOL) price extended its slide on Sept. 17 as a major network outage over the past week — pointing to heightened security risks — hit traders’ confidence.

The SOL/USD exchange rate fell up to 13.27% to its intraday low of $133.53 in a corrective trend that began after it topped out near $221.38 on Sept 9. As a result, SOL’s price has crashed by almost 40% since its all-time high last week, despite more than tripling its value in the past 30 days.

Solana backers tout its layer-1 blockchain solutions as a direct competitor to Ethereum. That is mainly due to its potential to ensure higher speed and lower transactions costs than the world’s leading smart contracts platform.

However, on Sept. 14, Solana suffered a denial-of-service disruption, wherein a spike in transaction load — of up to 400,000 per second — overwhelmed its network. As a result, Solana’s mainnet beta suffered 18-hours of instability, forcing decentralized applications (dApps) working atop its blockchain to become unusable.

The root cause of the issue was reportedly a decentralized exchange, Raydium. On it, bots attempted to buy SOL tokens and, as a result, flooded the network with up to 400,000 transactions per second. On the other hand, Solana validators failed to prioritize transactions, causing a chain split.

SOL/USD rates fell up to 19.17% to $137.15 on Sept. 14, only to rebound sharply later to close the day at a 6.47% loss. Nonetheless, the sell-off continued in the next sessions, driven by fears that Solana is more centralized than its top rival Ethereum.

Gavin Wood, the co-founder of Ethereum and another rival blockchain network Polkadot, pointed out that Solana functions with an “exclusive and closed set of servers,” which somewhat increases its network’s speed but comes at the cost of lower decentralization.

The comments appeared as Ethereum successfully withstood against the same attack.

In a tweet issued on Sept. 16, Solana promised to take more proactive steps against potential hacking attempts. The foundation also announced that it would publish a “detailed post-mortem” analysis in the coming weeks.

SOL/USD expects to resume its prevailing bullish momentum despite the price correction as it paints a classic technical structure with an upside outlook.

Dubbed a “bull flag,” the pattern forms when the price consolidates lower in a descending channel (flag) following a strong move upward (flagpole). Ultimately, the price breaks above the channel’s upper trendline, typically rising by as much as the Flagpole’s height. 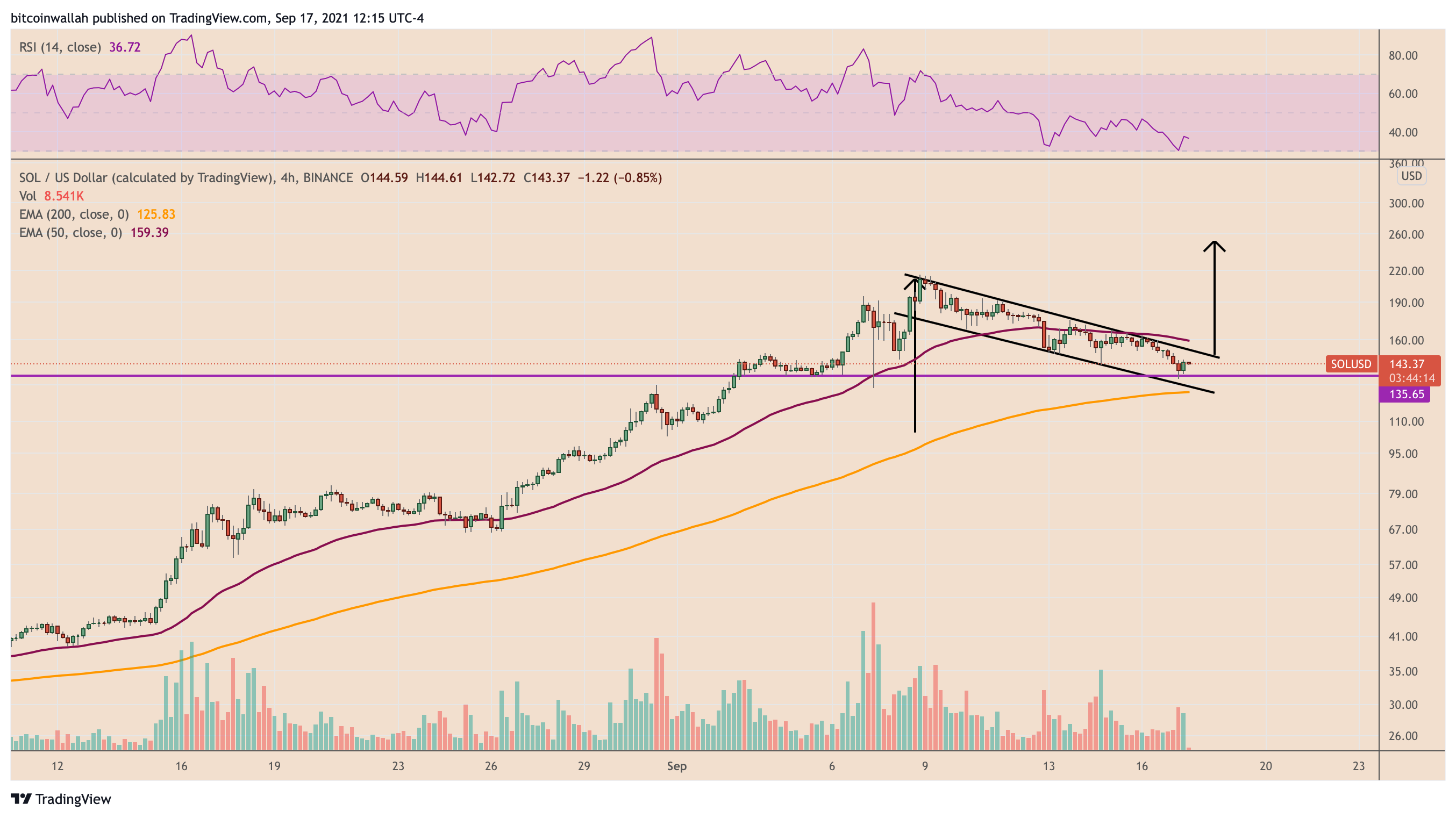 Solana’s recent price action has led it to form a similar bull flag pattern. As a result, its next attempt to break above the channel’s upper trendline could lead its price as high as the flagpole’s height, which comes to be around $107.