With the continuous lockdowns and travel advisories brought on by the COVID-19 pandemic, 2020 seems to be a perfect year for discovering and reading new books.

As such, Cointelegraph collected a list of non-crypto-related book recommendations from 10 of the biggest thought leaders in the blockchain space. Sheila Warren, Caitlin Long, Alex Mashinsky, Tim Draper and others all chimed in to share their favorite or most interesting reads, demonstrating how their worldviews and perspectives have been shaped through literature.

Here are the top 10 books these influential individuals recommend reading:

“The Secrets of Spies” by Heather Vescent, Adrian Gilbert and Rob Colson 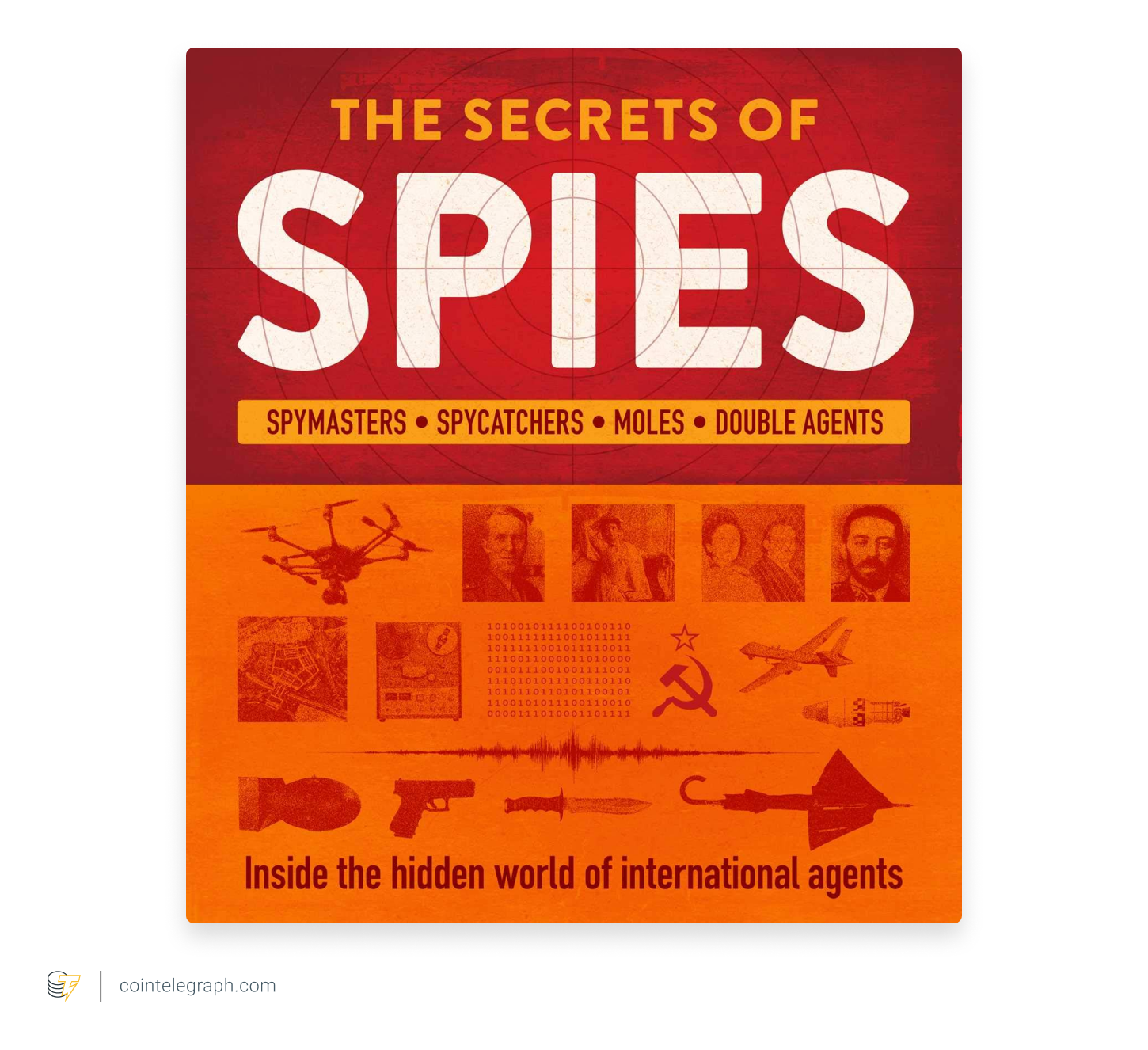 Brian Behlendorf, executive director of Hyperledger, told Cointelegraph that a recent book he read and enjoyed was The Secret of Spies. This novel recounts tales of spies from all the way back in ancient times to today, focusing on major historical events. Behlendorf commented:

“People need to think more like a hacker thinks when designing things to make them resilient against failure, and so it’s fun to read about how spies and spycraft represented some of the first hostile-environment thinking that hackers later adopted and blockchain design really benefits from.”

“Pedagogy of the Oppressed” by Paolo Freire

Recommended by Sheila Warren, head of blockchain and DLT for the World Economic Forum 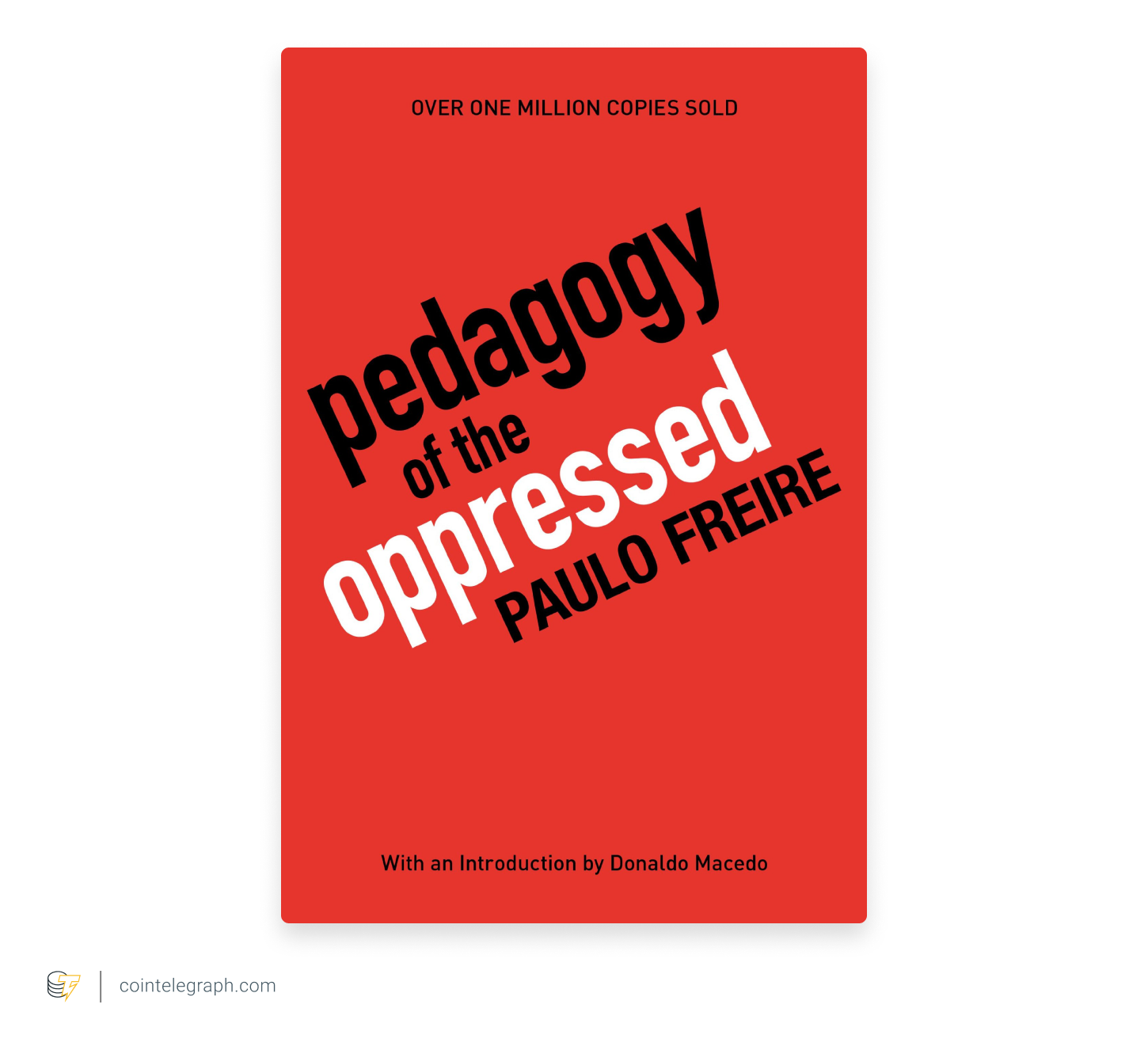 Sheila Warren, head of blockchain and distributed ledger technology for the World Economic Forum, told Cointelegraph that a book that has shaped her thinking is Pedagogy of the Oppressed by Brazillian educator Paolo Freire. Warren shared that she came across this novel in law school while working on a project with the now-defunct Institute on the Arts and Civic Dialogue:

“This novel completely changed the way I think about power. Among other gems, the book outlines a framework for thinking about promoting dialogue, anchored in cooperation, unity, organization, and cultural synthesis. I’ve found myself revisiting this book over and over again, and it was the first thing I thought of when I first read the Satoshi whitepaper. My other suggestion is Strunk & White, The Elements of Style, because being a better writer never hurt anyone!” 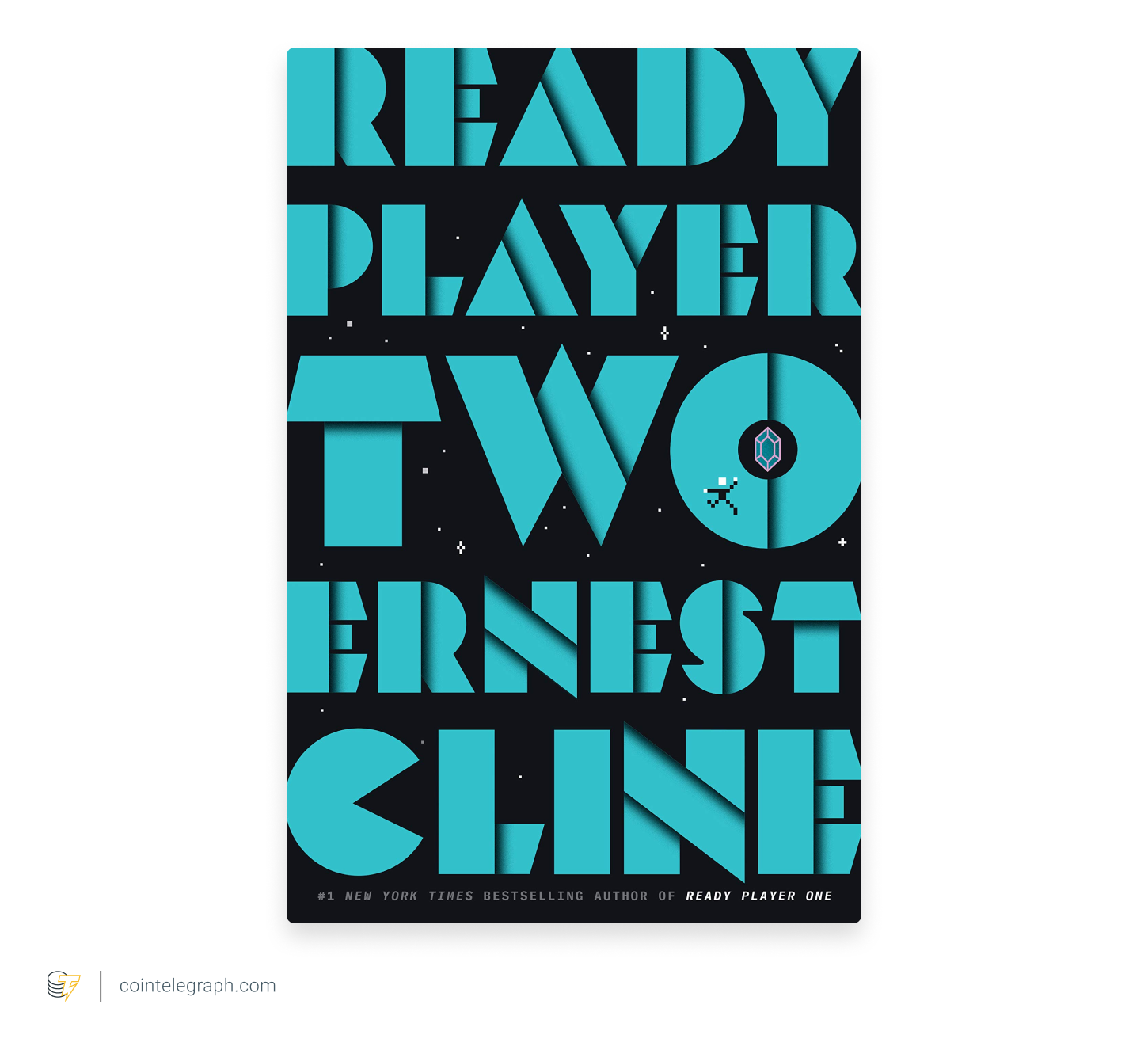 Tim Draper, venture capitalist and Bitcoin investor, told Cointelegraph that he enjoys reading science fiction, noting that Ernest Cline’s Ready Player Two is one of his favorite books. The New York Times bestseller was released this year and is the sequel to the worldwide bestselling book Ready Player One.

Unlike the first book, Ready Player Two has a different storyline yet involves all the previous characters. The novel focuses on a new technology called “ONI” that allows users to record their experiences in real life. While revolutionary, this book demonstrates the dangers of an addictive technology, alluding to what an artificial-intelligence-driven future could look like.

“When Money Dies” by Adam Fergusson

Recommended by Caitlin Long, founder and CEO of Avanti Financial 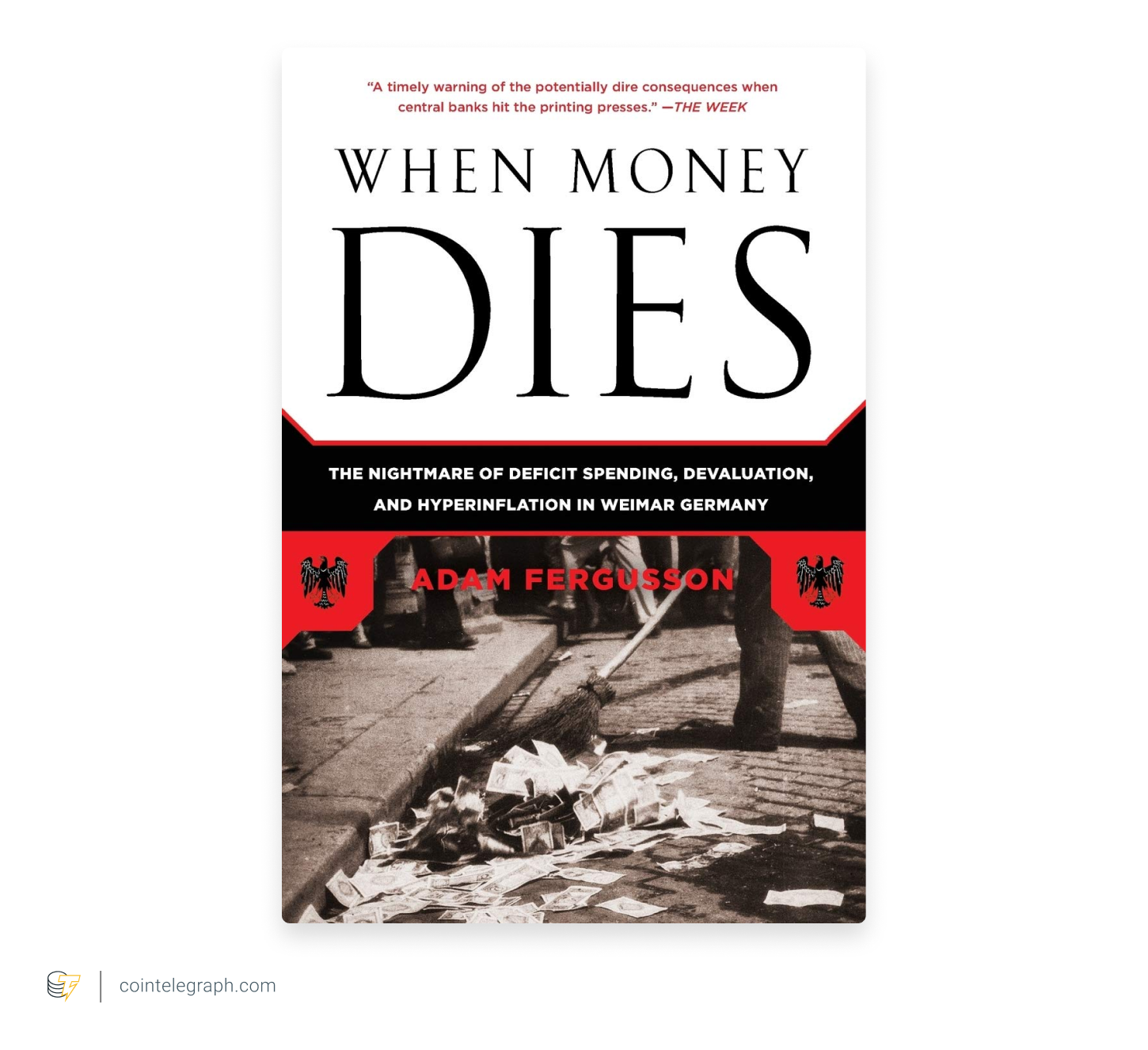 Caitlin Long, founder and CEO of Avanti Financial, told Cointelegraph that her favorite book is When Money Dies by British historian Adam Fergusson. Written in 1975, this book is a historian’s take on the 1923 hyperinflation in Weimar Germany. Long shared that she will always remember this book because it taught her to spot patterns applicable to any currency collapse:

“Economists tend to look at currency collapses on log charts, but log charts obfuscate the ‘rip your face off’ and ‘it’s finally over’ rallies along a currency’s path to collapse — it never happens on a straight line, and log charts smooth over huge underlying volatility. In Weimar Germany, the amplitude of market movements toward the end became staggering. At first the currency moved 2% intraday, then 5%, then 10%, then 20% and eventually 50% — intraday moves — relative to the value of stocks, and relative to more stable currencies, peppered with many head-fake rallies along the way. The ‘tipping point’ for a currency seems to be when society realizes en masse why prices are really going up — namely, that the denominator of a price (the currency) is going down in value. All prices are just ratios, expressed as the value of the good (numerator) in terms of the currency (denominator).”

Long mentioned that after reading this book, she questions whether stock market rallies are evidence that businesses are creating economic value or simply the result of a real decline in the purchasing power of money.

Recommended by Alex Tapscott, co-founder of the Blockchain Research Institute 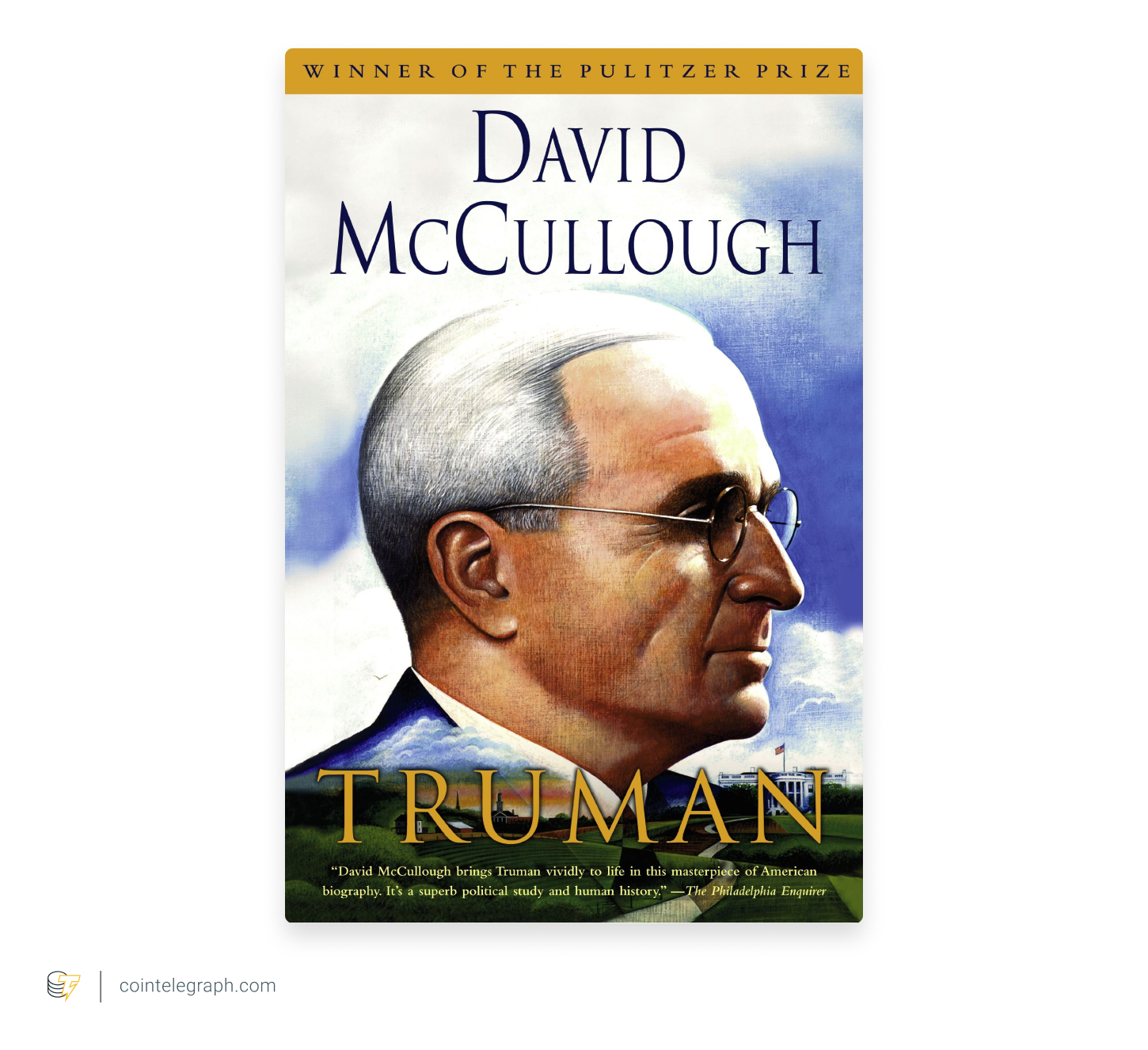 Alex Tapscott, co-founder of the Blockchain Research Institute and author of Financial Services Revolution, told Cointelegraph that Truman by David McCullough is his favorite book of 2020, even though it was released years earlier in 1992. As the title suggests, Truman is a Pulitzer Prize-winning biography of former United States President Harry S. Truman.

According to Tapscott, Truman is prescient because today we find ourselves in a period of epochal change. However, Tapscott noted that unlike during Truman’s time, this change is being wrought by technological acceleration rather than the end of a devastating war:

“Still the effects are similar: it is upending the economy, our traditional systems of government, old alliances and more. In 1945, we got lucky when a yet-unproven Vice President stepped into the biggest shoes and proved himself an able leader. We are in want of strong leadership today. Who will step up?”

Tapscott elaborated that Truman is an inspiring, joyful read that has been deeply researched: “President Truman came from humble Midwestern origins and had a limited education, but nevertheless rose to become the President of the U.S., leading the Free World during one of the most dangerous and pivotal times in human history. Truman never expected to be President and, as Vice President, was thrust into the role after Roosevelt died. Everyone underestimated him. But he proved himself a man of iron will, vision, moral fortitude and political savvy.”

Recommended by Denelle Dixon, CEO and executive director of the Stellar Development Foundation 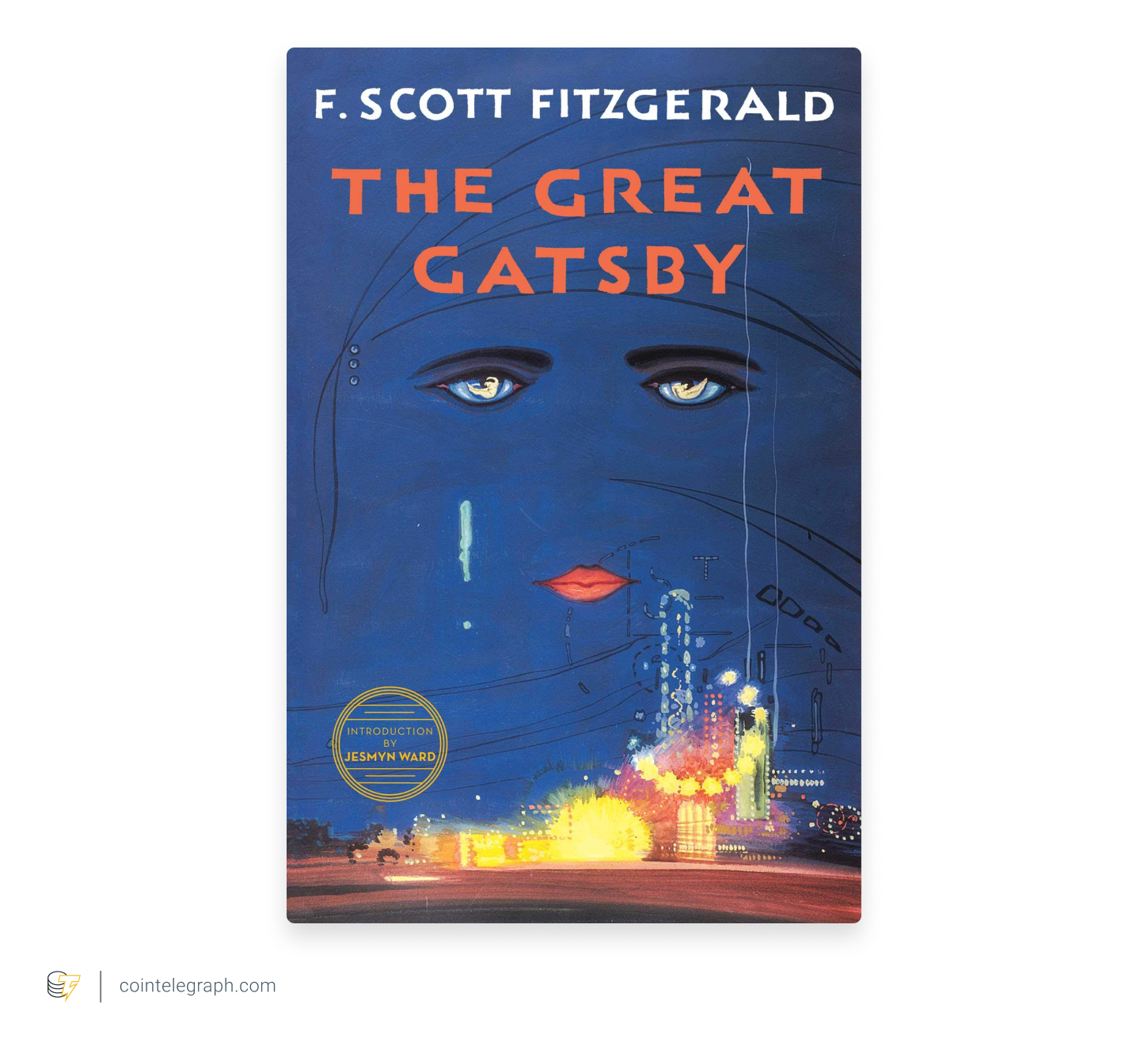 Denelle Dixon, CEO and executive director of the Stellar Development Foundation, told Cointelegraph that one of her favorite books is The Great Gatsby by F. Scott Fitzgerald. Dixon shared that the opulence and beauty Fitzgerald conveys in this novel is countered with the ugliness of class dynamics and the utter lack of true love:

“The story feels desperate, even as it attempts to capture fun and excitement. I am drawn to it because I have been drawn to Fitzgerald’s own personal story which is tragic at best. The cover of the book itself is haunting and the story is one that beckons me back to read on an annual basis. I don’t finish the story feeling good about where it ends, but it does remind me of the importance of being true to yourself — a trait that most of the main characters lack.”

Dixon further noted that The Great Gatsby is a story of class struggles, showing the dedication of what one character does to grow and pretend to be a part of a class that he wasn’t born into. “It is in many respects the failure of the American dream of ‘growing into prosperity’ and being accepted as ‘prosperous,’” she said. 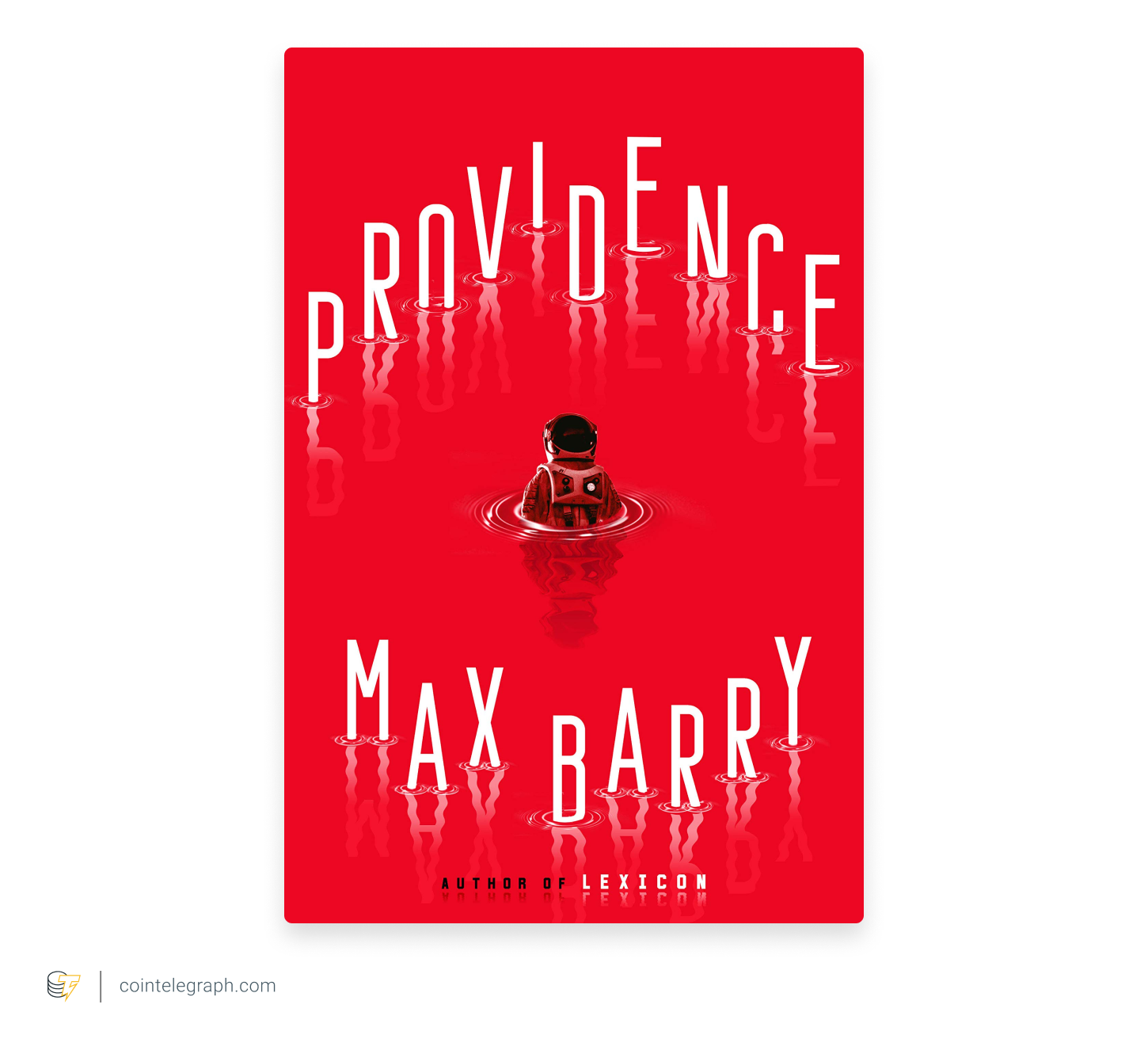 Paul Brody, global blockchain lead at Ernst & Young, told Cointelegraph that the book he read within the last year that had the biggest impact was Providence by Max Barry. Published in March, Barry’s novel is a science fiction read that focuses on the lives of four crew members aboard an AI-powered spaceship. The twist is that the characters discover they are not the crew but rather the cargo. Brody said:

“I am a huge history fan, but most of that I get from articles and summaries, which I think really condenses matters nicely. I read books for escapism and to immerse myself in alternative lives and worlds and for those I go entirely for fiction, with a big helping of science fiction. I enjoy fiction because I love to think about how the world will change or can change. Fiction forces the author to really think about how a regular person would experience the impact of technology.”

Recommended by Alex Mashinsky, founder and CEO of Celsius Network 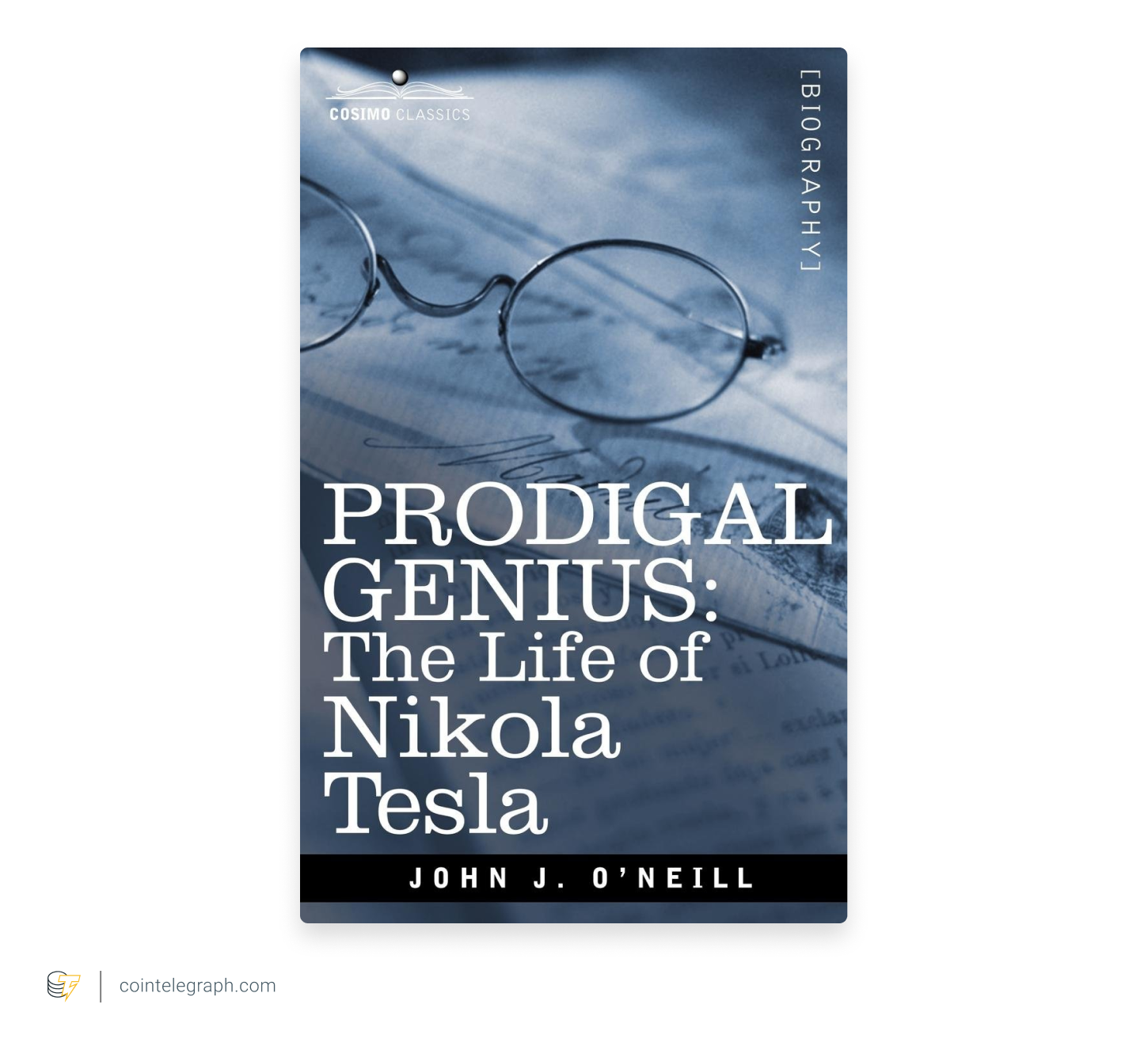 Alex Mashinsky, founder and CEO of Celsius Network, told Cointelegraph that his favorite book is Prodigal Genius: The Life of Nikola Tesla by John J. O’Neill. This is a biography focused on the life of Nikola Tesla, a pioneer of electrical engineering. Mashinsky commented:

“Tesla created a network that is even bigger than the internet — our global alternating current electrical grid. He is as much a lesson about what to do and how to create as he is a lesson on how not to do things.”

“Orbiting the Giant Hairball: A Corporate Fool’s Guide to Surviving with Grace” by Gordon MacKenzie 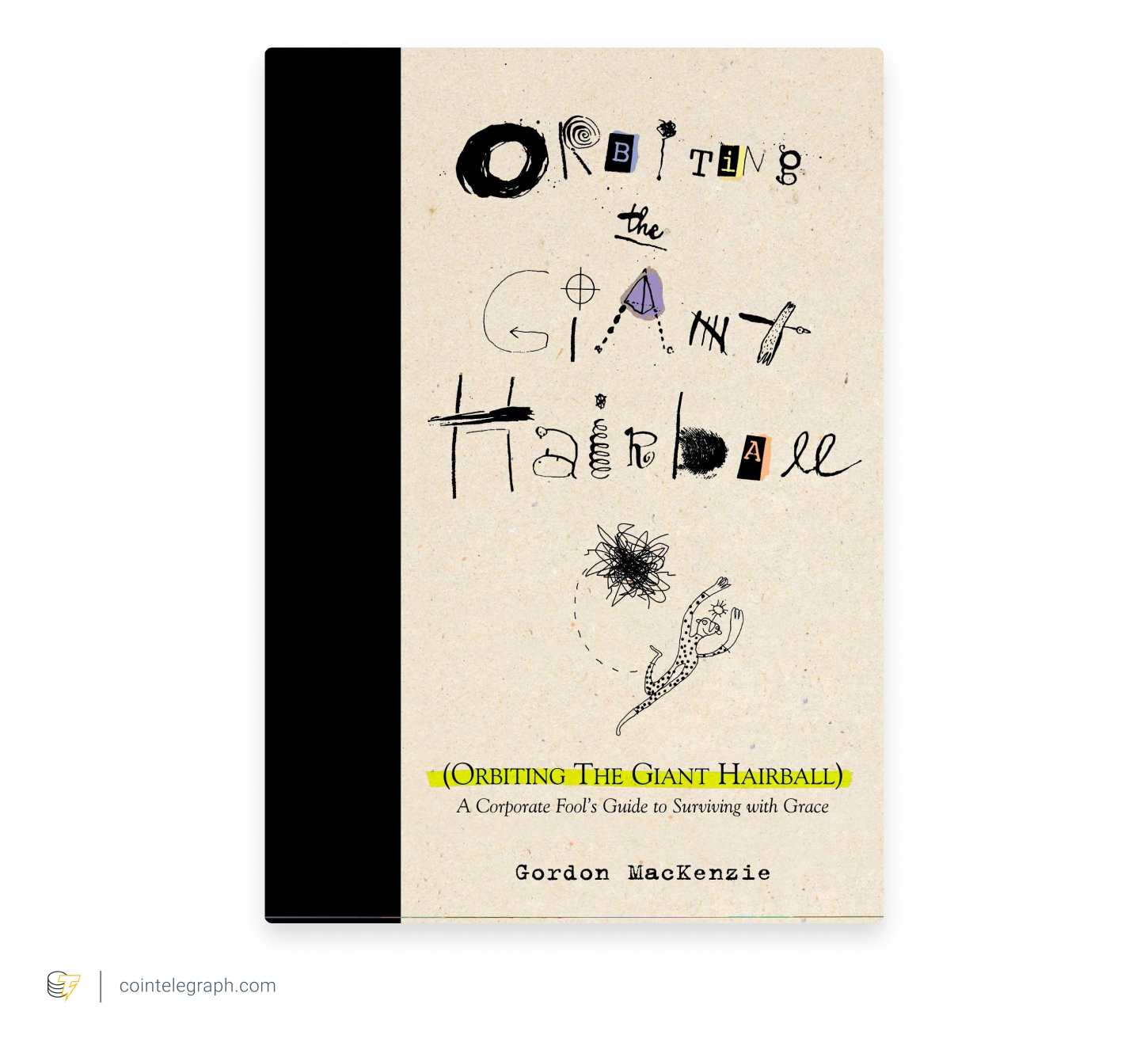 John Wolpert, technical steering committee chair for Baseline Protocol, told Cointelegraph that one of his favorite books is Orbiting the Giant Hairball: A Corporate Fool’s Guide to Surviving with Grace by Gordon MacKenzie.

This book uncovers the professional evolution MacKenzie underwent to learn about fostering creative genius. The book explains how innovative organizations can quickly become a “giant hairball,” or a tangled mess of rules and systems, which ultimately leads to mediocrity.

“This is a great story about how to keep creativity alive inside companies and how to harmonize one’s intentions with the intentions of the organization and community.”

“The Box” by Marc Levinson 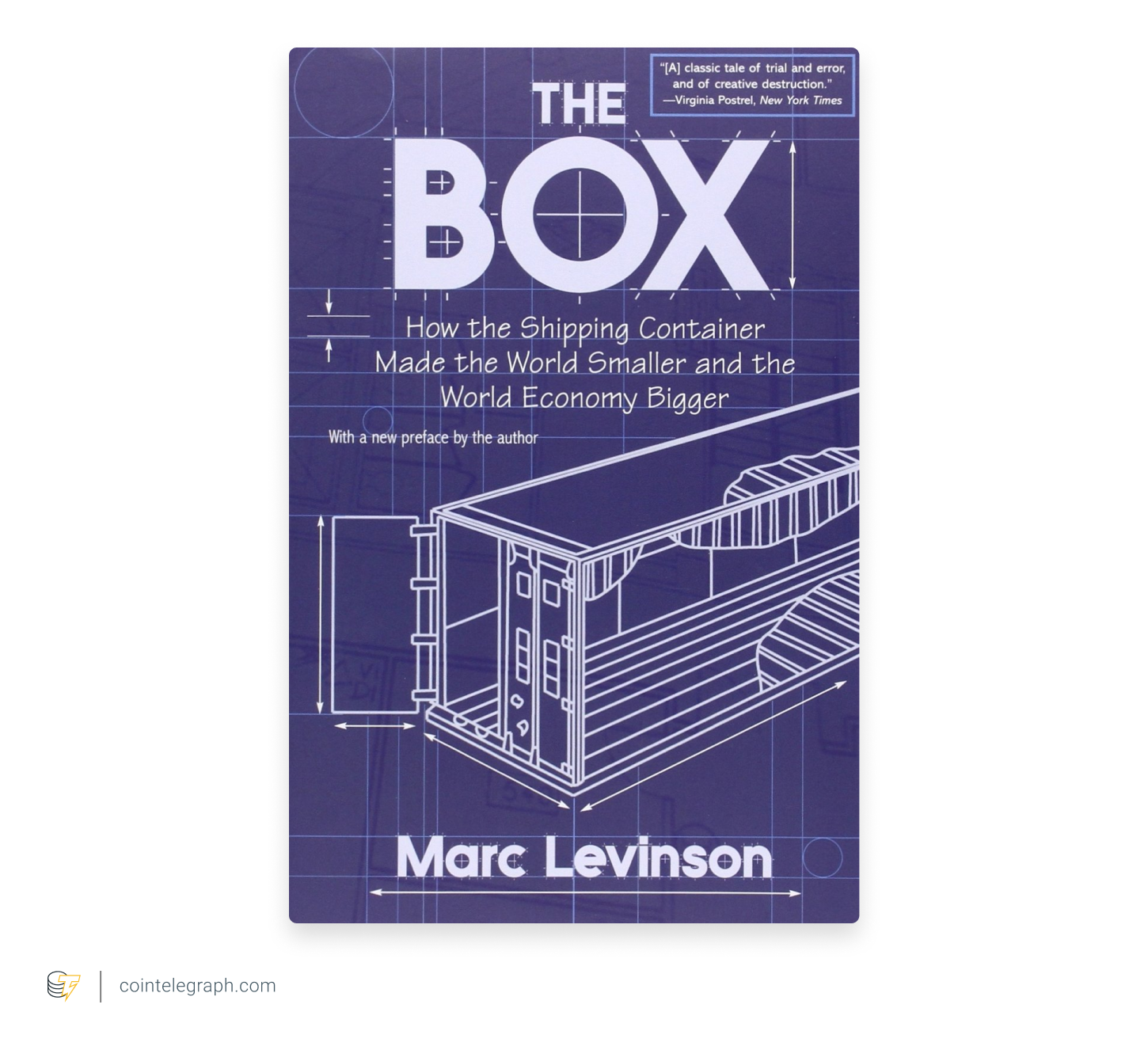 Alistair Rennie, general manager of IBM Blockchain, told Cointelegraph that his favorite book is The Box by Marc Levinson. According to Rennie, this book tells the story of how containerized shipping came to be.

“It’s an excellent story that gives great insight into how such systemic change transpired including insights into standardization, patents and regulatory impact — leading to tremendous economic gain. The Box really connected with me as I executed on TradeLens — a blockchain based system to transform how data is shared and leveraged across the ocean shipping ecosystem.”