Last month China’s central bank, the People’s Bank of China (PBoC), published a memo criminalizing practically all cryptocurrency activity. When the memo started circulating online, Bitcoin’s (BTC) price dropped over 6.5%. Soon after, however, industry experts suggested that the news may have been the ultimate dip-buying opportunity.

China’s crackdown on crypto started years ago, to the point that Bitcoin suffered its biggest mining difficulty drop of nearly 28% in July of this year as miners started migrating out of China after the government tightened its grip on bitcoin mining and trading. The crackdown saw the computing power securing the Bitcoin network — its hash rate — drop by nearly 50%. The PBoC’s recent memo meant every remaining mining operation and exchange had to shut down.

Fast forward to October, and Bitcoin mining operations appear to be recovering. According to on-chain analytics provider Glassnode, BTC’s hash rate has largely recovered from the slump caused by China’s crackdown.

The firm’s “Week On-chain” report clarified that both BTC’s hash rate and mining difficulty, which measures competition among miners securing the network, were both on a “consistent path to recovery.” Data shows Bitcoin’s hash rate is now close to its pre-exodus levels while maintaining an upward trajectory.

Sacha Ghebali, director of business and strategy at cryptocurrency data provider TheTie, talked to Cointelegraph about the quick recovery:

“A lot of miners have been buying hash rate from Chinese miners following the ban, which together with the rise of U.S. institutional mining activity may account for the hash rate recovery.”

Ghebali added that the “quick crypto market recovery has been mostly fueled by the prospects of a futures ETF finally coming to the market,” which would generate “intense buying pressure.”

Bitcoin’s price is believed to have risen earlier this month in response to increased speculation that such an ETF would be approved by the United States Securities and Exchange Commission (SEC). Bloomberg senior analyst Eric Balchunas has said he is 75% certain approval is imminent. China’s crackdown seemingly weighed less on the market than the prospect of a Bitcoin ETF in the U.S.

Blockchain data shows that large players took advantage of Bitcoin’s price drop from the PBoC’s memo to buy the dip and add more BTC to their stashes. Ki Young Ju, CEO of crypto analytics firm CryptoQuant, flagged on Twitter that someone bought “up to $1.6 billion worth of BTC via market orders” in only five minutes on a centralized exchange.

“Last month was the fourteenth time in the past decade when Chinese authorities have cracked down on the crypto industry. It is possible that markets have now fully priced in a China crackdown, with each subsequent announcement having less of an impact on spot prices.”

Humiston stated that long-term holders joined whales in taking advantage of the news, adding that the proportion of Bitcoin held by whales, defined as wallets with more than 100 BTC, reached a new all-time high of 11.88 million BTC in mid-September.

The analyst noted that those wallets represent more than half of the total BTC supply, adding that consistent accumulation placed pressure on BTC’s marketable supply, “making the asset subject to a jump in volatility amid growing demand.” According to Humiston, this helps explain the surge above $50,000.

He added that Kraken Intelligence has found that, while markets initially sell-off in response to negative headlines from China, historically, BTC “went on to rally more than +50% in the 90 days that followed.”

Whales and long-term holders may not have been the only ones accumulating BTC after the ban, as data from Glassnode shows the number of BTC addresses holding over one coin reached a four-month high this week.

Marie Tatibouet, chief marketing officer at cryptocurrency exchange Gate.io, told Cointelegraph that Federal Reserve Chairman Jerome Powell’s statement that the Fed has no intention of banning Bitcoin could also have led to the accumulation.

While Bitcoin’s price recovery may be explained by other factors such as the U.S. response to China’s cryptocurrency ban, the number of unique Bitcoin addresses being used on the blockchain has also been ticking up.

It’s impossible to accurately tell how many people use Bitcoin, as any entity can create hundreds if not thousands of addresses. Unique address numbers are often used to gauge user levels on the blockchain because most users stick to one or two active addresses. 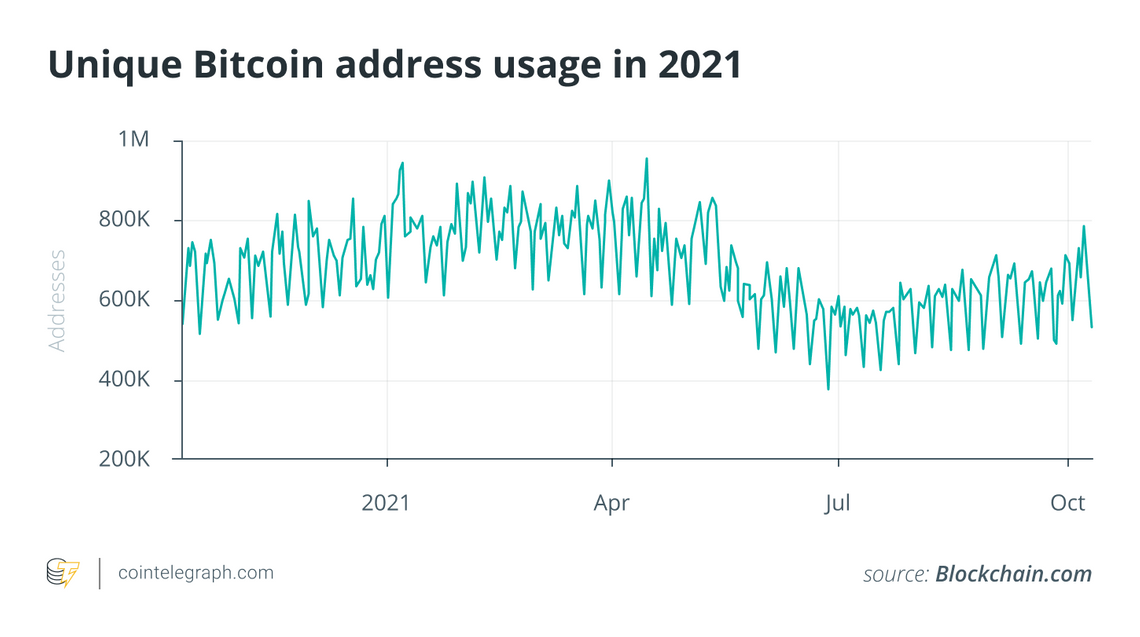 Speaking to Cointelegraph, Nick Jones, CEO and co-founder of cryptocurrency wallet and exchange Zumo, suggested that unique address usage may be increased as market participants are now more certain of what’s ahead:

“Markets like certainty. China banning crypto has been a recurring headline for so many years now that making a clean break brings much-needed clarity and is easily absorbed in the longer-term, just like we saw with the forced relocation of mining infrastructure out of China earlier in the year.”

The entrepreneur added that it’s no coincidence that China is pushing out its own central bank digital currency, suggesting that the move wasn’t “any fundamental statement on crypto or the blockchain,” but instead came to bolster the adoption of its own digital currency.

Jack McDonald, CEO of crypto-asset custodian Standard Custody and Trust, said China’s ban is a “good thing for confidence in crypto,” but suggested market activity has been going up as cryptocurrency markets historically trend upward during the last quarter of the year.

Nevertheless, McDonald offered another explanation for the growing number of unique addresses:

“It’s moves like these that inspired Satoshi to create Bitcoin in the first place as an alternative to government-issued and controlled fiat currencies. China has always had strict capital controls on its citizens, so it makes sense that they would ban crypto, which has been a common way for its citizens to escape capital controls.”

Whether cryptocurrency market participants gained confidence from China’s all-out ban, simply ignored it and are expecting upward momentum in Q4, or adopted crypto to escape capital controls, one thing is certain: The market has been recovering over the last few months.