Smart contracts have been a revolutionary force in the blockchain industry because they have enabled the creation of decentralized finance protocols, nonfungible tokens and a new form of carrying out transactions without the need for an intermediary.

Cardano is one of the many projects that has been gaining momentum throughout 2021 and now that the project’s long-awaited smart contract capabilities are on the verge of becoming reality, the token is on the precipice of setting a new all-time high.

Data from Cointelegraph Markets Pro and TradingView shows that after bottoming at a low of $1.02 on July 20, the price of Cardano (ADA) has surged 139% to a multi-week high at $2.45.

Here’s a look at what some analysts and traders are saying about the recent price action for ADA and what token holders may want to keep an eye on in the short term.

A bullish upturn in the 50MA

The rapidly rising price of ADA has been hard for most traders to ignore, especially since multiple technical indicators have now flipped bullish.

One such indicator is the 50-day moving average (50MA), which is now pointing up after being on a downslope for roughly two months as highlighted in the following chart posted by pseudonymous Twitter user Pharmlord. 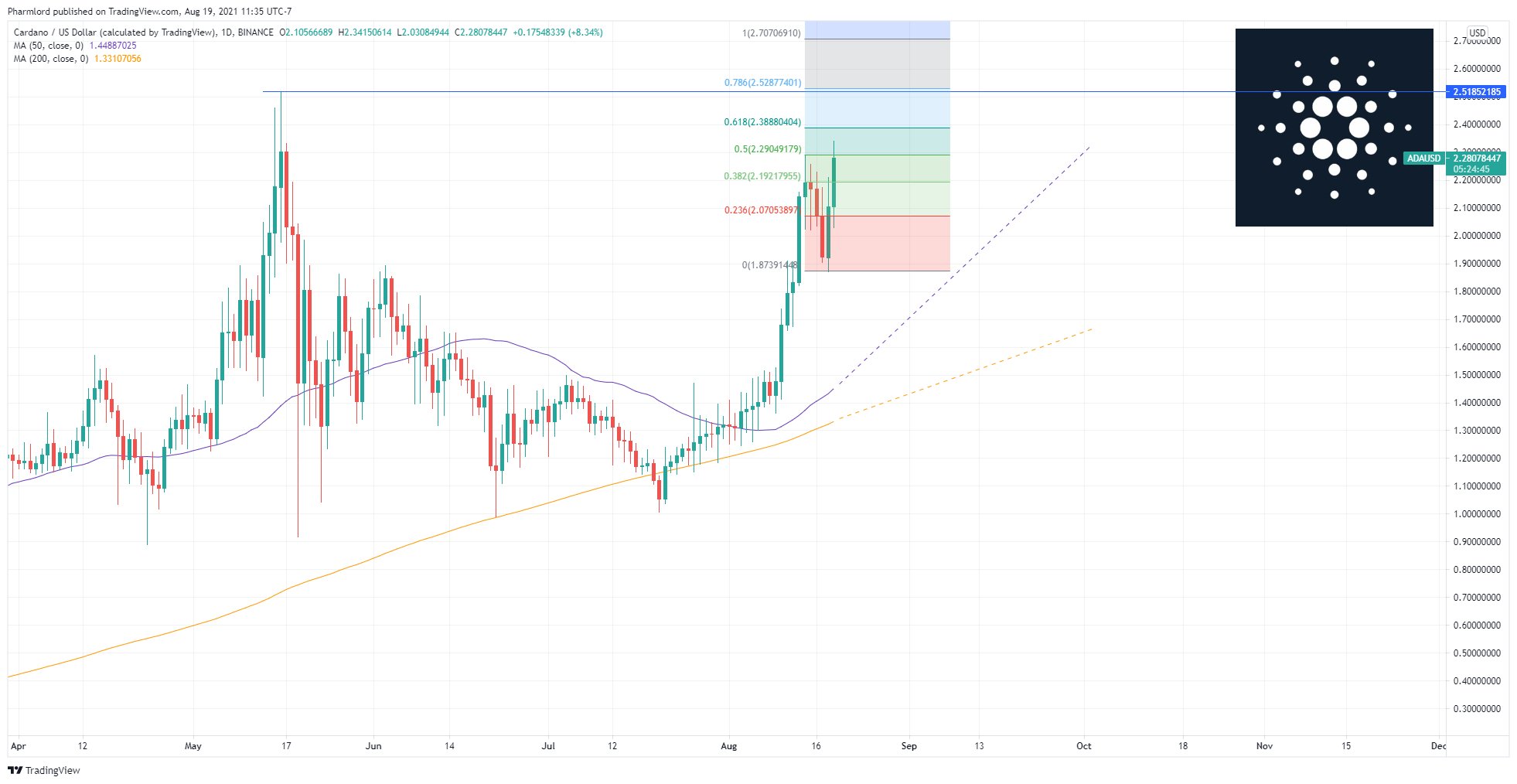 As seen in the chart above, once crossing above the 50-MA, ADA’s price doubled and is now on the verge of hitting a new all-time high at $2.46.

Insight into the important levels that ADA bulls need to keep an eye on was provided by Rekt Capital, a pseudonymous Twitter analyst, who pinpointed the importance of the $2.30 level.

ADA has already managed to convincingly surpass a lower resistance zone shown in red on the chart above and is now attempting to break the May 16 all-time high at $2.46.

According to Rekt Capital:

“The only major resistance left before a new All-Time High is the black level ahead (~$2.30).”

Related: ADA hits $2 for the first time since May ahead of Cardano smart contract announcement

A cup-and-handle breakout will confirm the ATH

According to Twitter user Fidzcrypto, ADA is showing a distinct cup-and-handle formation on the daily timeframe.

Investopedia cites the cup-and-handle pattern as a technical indicator that resembles a cup with a handle, where the cup is in the shape of a “u” and the handle has a slight downward drift.

The cup portion of the pattern can be seen on the chart between May 14 and Monday, Aug. 16, while the handle is seen in the price dip and recovery from Monday to Wednesday.

“The cup and handle is considered a bullish signal, with the right-hand side of the pattern typically experiencing lower trading volume. The pattern’s formation may be as short as seven weeks or as long as 65 weeks.”