Ethereum has for the first time since February 20th climbed above $2,000. This comes as a surprise move from the largest altcoin in the world. Evidence of this is the amount of leveraged longs. But market trends in the last few weeks and even days show the altcoin has been bullish all along. 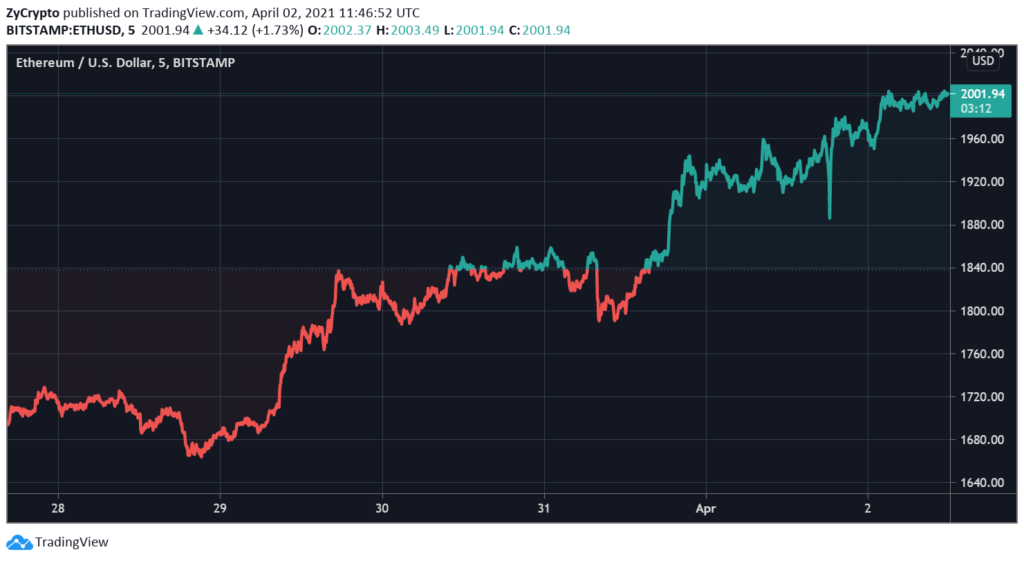 Ethereum exchange balance has signaled a market shift. Over the last few days, top exchanges have seen a load of Ethereum withdrawn. This some analysts speculate, is a sign of demand from institutions. But so far, no company has come out to state it’s putting Ethereum on its balance sheet. Like Bitcoin, once institutions begin buying Ethereum, prices will rally strong.

A few days ago, Ethereum was validated as sound money after Visa integrated cryptocurrencies into their network. Now Visa can settle payments with USDC on the Ethereum blockchain. This is a big win for the cryptocurrency and validation that it is a solid asset. With interest from big financial powerhouses like Visa, Ethereum has attracted demand from institutions.

Institutions are not the only ones willing to hold out and see if prices can break the current all-time high. Data shows that the number of exchanges receiving Ethereum from exchanges has hit a new monthly high. According to Glasssnode, this stands at 1,291.381. Some speculate that a continued trend of the same could trigger a supply crisis.

Additional data from Glassnode shows that the price jump has coincided with Total Value in the ETH 2.0 Deposit Contract which reached an all-time high. The analytical firm notes that the total value locked in ETH 2.0 has just reached  3,630,626 ETH.

What Analysts Expect of ETH

Analysts have largely been bullish on Ethereum noting it is correlated with Bitcoin. And just like Bitcoin, Ethereum is trading just below its all-time high set early in the year. Demand from institutions could play a big part in price movement over the next couple of months. On top of this, demand is set to reach its pivot, with few holders willing to sell.

According to LilMoonLambo who based his argument on Coinbase going public on April 14, the listing will also be a major boost as it exposes millions to the market. Market analyst CryptoBirb says that he expects that Ethereum will surge in the next few weeks to set a new all-time high of $2,700.