Crypto asset markets are starting to settle following an epic pump that added $20 billion to total capitalization. Several altcoins made their largest daily gains for several months, and here are the top five.

Over the past 24 hours, cryptocurrency markets have made their largest move for several months pushing total market cap to almost $245 billion. Since the beginning of the year, the market has grown by 26% adding over $40 billion in total. 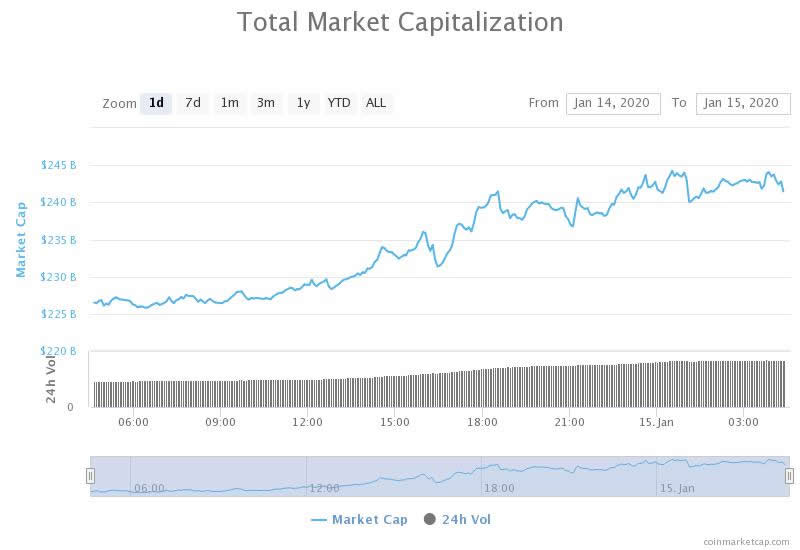 Altcoins, which are still in a two-year bear market, are driving momentum at the moment as bitcoin dominance falls back to 67%, but which ones are leading the pack? We’ll take a look at the top one hundred cryptos.

Craig ‘Faketoshi’ Wright’s bitcoin spinoff is grabbing all the headlines at the moment. As rumors of private key discovery emerge, the premise that the Satoshi claimant may have access to a multi-million dollar BTC ‘Tulip Fund’ has sent speculators into a frenzy.

BSV has surged almost 130% over the past 24 hours to flip its brother Bitcoin Cash as its market cap tops $7 billion. It hit an all-time high just over $400 a few hours ago.

Another spawn of BTC is also one of the top performers of the day. BTG, which has done nothing since April 2018, lifted off a few hours ago surging from $8 to just below $20.

This epic move has added almost 140% to the price in less than 24 hours and has largely been driven by the movements of BSV and BCH.

It is no surprise then that the third peculiar knock-off of bitcoin has also made a massive pump today. BCD mirrored the moves of its hard forked brethren surging over 80% on the day from $0.42 to $0.77.

There appears to be nothing specific driving momentum for these chains aside from general FOMO and their perceived low price. Halvings of the hard forks are all set for this year also.

This privacy-based crypto asset has surged back up the coin cap charts to take 14th spot with a monumental pump today.

A 70% surge took Dash from an intraday low of $76 all the way up to $130. The altcoin is big in South America where FOMO appears to have taken hold over the past few hours.

ETC is the fifth top performer today outpacing its big brother by a factor of two. Ethereum Classic has notched up a 36% gain from $5.70 to reach $7.75 today.

Again there appears to be little specifically driving this momentum aside from general altcoin bullishness.

The next five top performers in the top fifty altcoins according to Coinmarketcap.com include Bitcoin Cash, BAT, Zcash, EOS, and Ontology. Altseason hopium has returned but cryptos have a long way to go before their in a true bull market.

Will the bitcoin hard forks continue to crank higher? Add your thoughts below.