As Bitcoin stays motionless near $9,100, one of its old fractals is pointing to a full-fledged breakout towards $70,000 or above.

Spotted first by Artem Shevelev, a TradingView-based market analyst, the pattern shows Bitcoin in a seven-stage bullish development. So it seems, the cryptocurrency’s run-up to its all-time high near $20,000 in December 2017 succeeded six steps, each involving specific price moves, and indicators.

Mr. Shevelev noted that Bitcoin has been forming the very same pattern since 2017. It is trading inside a giant Symmetrical Triangle while undergoing phases that include medium-sized ascending/descending triangles, so-called “flat zones,” inverse triangles, and sudden crashes.

The chart above shows the identical eerie nature between the two patterns. If its accurate, then Bitcoin is currently in the penultimate phase before it attempts to break out of the giant Symmetrical Triangle.

In his chart, Mr. Shevelev envisioned the price to rise with extreme proportions as it did back in 2017. Back then, the rally was taking cues from euphoria in the emerging initial coin offering market. Traders demanded more Bitcoin so they could exchange it for promising startup tokens. 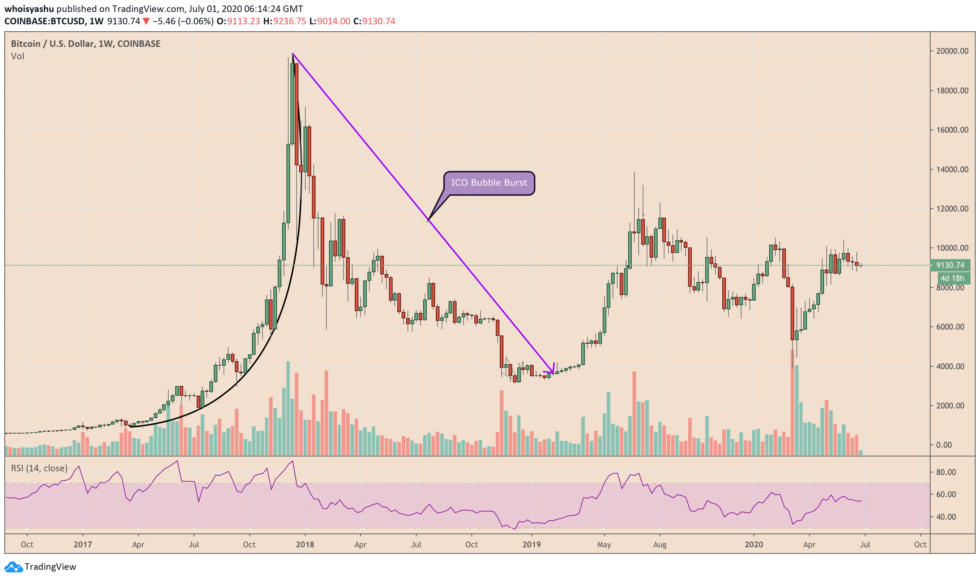 “So after the breaking out from the resistance line in early 2017, Bitcoin price started to grow,” said Mr. Shevelev.

“And after crossing, previous highs, [the] market flooded with new traders and fresh money. [It] caused insane growth of the price for about 357 days. [But] will this phase repeats after we cross 20k again? This is [a] topic for [discussion].”

The ICO market is in rearview now. Meanwhile, traders’ focus has shifted to Bitcoin’s potential growth amid an ongoing macroeconomic and geopolitical crisis. They expect the cryptocurrency to perform better as global central banks print trillions of dollars to aid their ailing economies through the pandemic.

Veteran investors like Paul Tudor Jones see quantitative easing as a recipe for an inflation disaster. The billionaire hedge fund manager in May 2020 announced that he is allocating a small portion of his $22bn fund into bitcoin derivatives, calling it the “fastest horse” in the market.

Mr. Shevelev’s chart sees Bitcoin rising to $70,000 but does not mention the source of the cryptocurrency’s next massive funding. That makes it more dependent on institutions like hedge and pensions funds, family offices, and others.

But for Adam Back, a cryptocurrency pioneer, Bitcoin could hit even $300,000 even without rich investors. He told Bloomberg that the current macroeconomic environment is prompting individuals to protect their savings from central banks’ inflationary policies.

“It is causing people to think about the value of money and looking for ways to preserve money,” Mr. Back said. “It’s a difficult environment to get any yield.”

Bitcoin was trading at $9,133 at the time of this writing.

Executives on the Move: Senior Hires at TigerWit, Capitolis and Maybank

There's a Harrowing Multi-Million Dollar Bitcoin Sell Wall at $9,400
We and our partners use cookies on this site to improve our service, perform analytics, personalize advertising, measure advertising performance, and remember website preferences.Ok