Bitcoin (BTC) is bouncing back this week as a sudden surge challenges weekly highs.

In what should provide some desperately needed confidence to bulls, BTC/USD is back at weekly highs on May 30, gaining several percent overnight.

In contrast to recent weekly closes, the May 29 candle managed to limit downside and reverse course immediately as the new week began.

Nonetheless, Bitcoin has now sealed nine red weekly candles in a row, something never seen before in its history.

Just how bearish is the largest cryptocurrency going into June? The macro environment remains troubled, retail interest is nowhere to be seen and calls for a deeper capitulation remain.

That said, should it continue its latest strength, Bitcoin still stands a chance of breaking out of its current trading corridor.

Cointelegraph takes a look at the factors primed to move the market in the coming days.

Can Bitcoin avoid 10 weeks of red?

Thanks to an unexpected but welcome U-turn overnight into May 30, Bitcoin is breaking with tradition this week.

Asian trading provided the backdrop to some solid gains, with both Japan’s Nikkei and Hong Kong’s Hang Seng index up over 2% at the time of writing. The trigger came from news that China is planning to relax some of its latest COVID-19 restrictions, opening up the economy.

Bitcoin nonetheless outperformed equities prior to European trading getting underway. 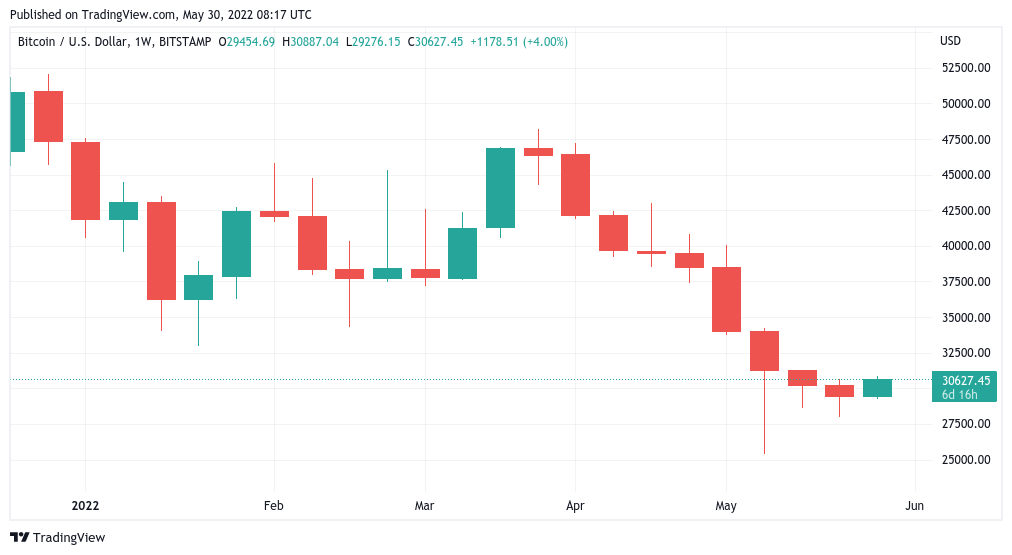 While caution remains thanks to the weekly close still being red, Bitcoin could nonetheless end its nine-week losing streak this week as long as next Sunday’s closing price is at least $29,500.

For some, the overnight action alone has been enough to get noticeably more positive on the near-term outlook.

“IMO not a time to be greedy looking for bottom ticks.”

Trader Crypto Tony noted that Bitcoin is still in a familiar trading range and should clear some key levels before being considered to have a firm trajectory. For him, this is $31,000, now not so far away.

Others focused on the idea of current gains being just another relief bounce and that Bitcoin should return lower afterward.

“Not sure if we should be very bullish here on BTC + ETH,” fellow trader and analyst Crypto Ed added in a Twitter thread released on the day.

He pointed to thin weekend volumes supporting the bounce, suggesting that higher levels did not have the bid interest required to cement themselves as new support yet.

“Saw some on my feed going short, which was understandable when seeing the weakness in the charts,” he continued. 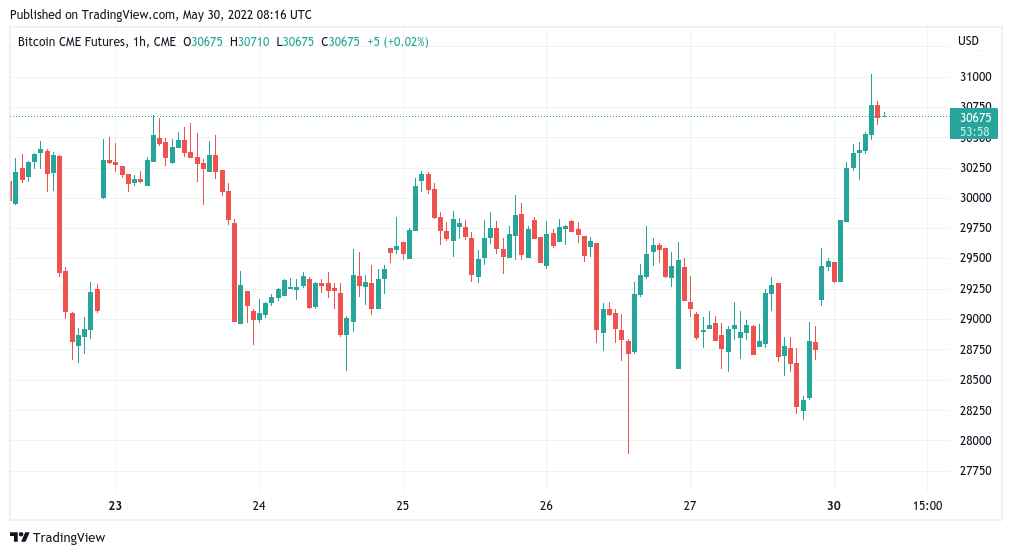 With United States markets closed for a public holiday on May 30, it will be up to Europe and Asia to dictate the day’s mood.

With the World Economic Forum behind them, crypto hodlers may be able to breathe a small sigh of relief going into the new month, prior to another U.S. Federal Reserve meeting in mid-June.

Asian stocks’ return to form after eight weeks of losses formed the major macro focus on the day.

After failing to take advantage of a similar rally in the U.S. last week, Bitcoin now appears to be capitalizing on the mood, which commentators nonetheless warn is likely not an indicator of an overall trend reversal.

Monetary tightening from the Fed and other central banks has not only got stock traders down, but has ignited talk of a major recession as the price economies pay.

“We are in the middle of a bear market rally,” Mahjabeen Zaman, head of investment specialists at Citigroup Australia, told Bloomberg.

“I think the market is going to be trading rangebound trying to figure out how soon is that recession coming or how quickly is inflation going down.”

The tightening is due to become real this week, June 1 is thought to be when the Fed begins reducing its balance sheet, currently at a record high of $8.9 trillion.

The European Central Bank (ECB) will halt its asset purchases later in the year, it revealed last week.

May 31 will further see consumer price index (CPI) data released for the Eurozone, ahead of similar data for the U.S. on June 10.

“Wall St’s fear gauge, investors’ sentiment & bond spreads are tracked for clues on where the market might go next. But only one of the 5 sentiment indicators suggests that the worst is over in the markets.” 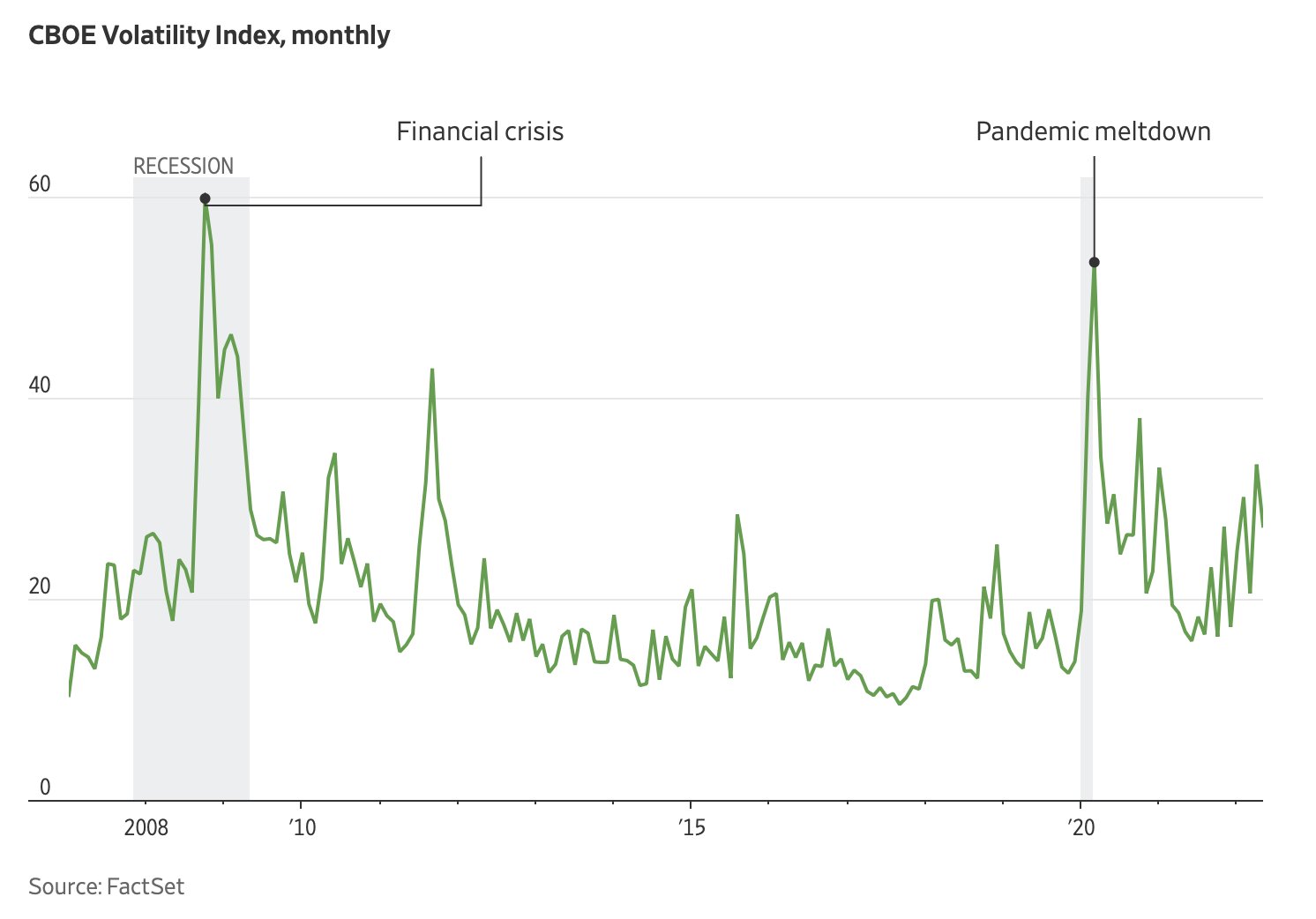 Coming to test support levels throughout the past week has been the strength of the U.S. dollar.

After surging to levels not seen since December 2002, the U.S. dollar index (DXY) is finally coming back down to Earth and even challenging its year uptrend.

This may still act as a silver lining for risk assets should the trend continue, as inverse correlation has worked in Bitcoin’s favor in particular in the past.

“This could just be the start of the bull run of 2022!” an emboldened Crypto Rover argued uploading a comparative chart showing the Bitcoin-DXY inverse correlation and how it played out in years gone by. 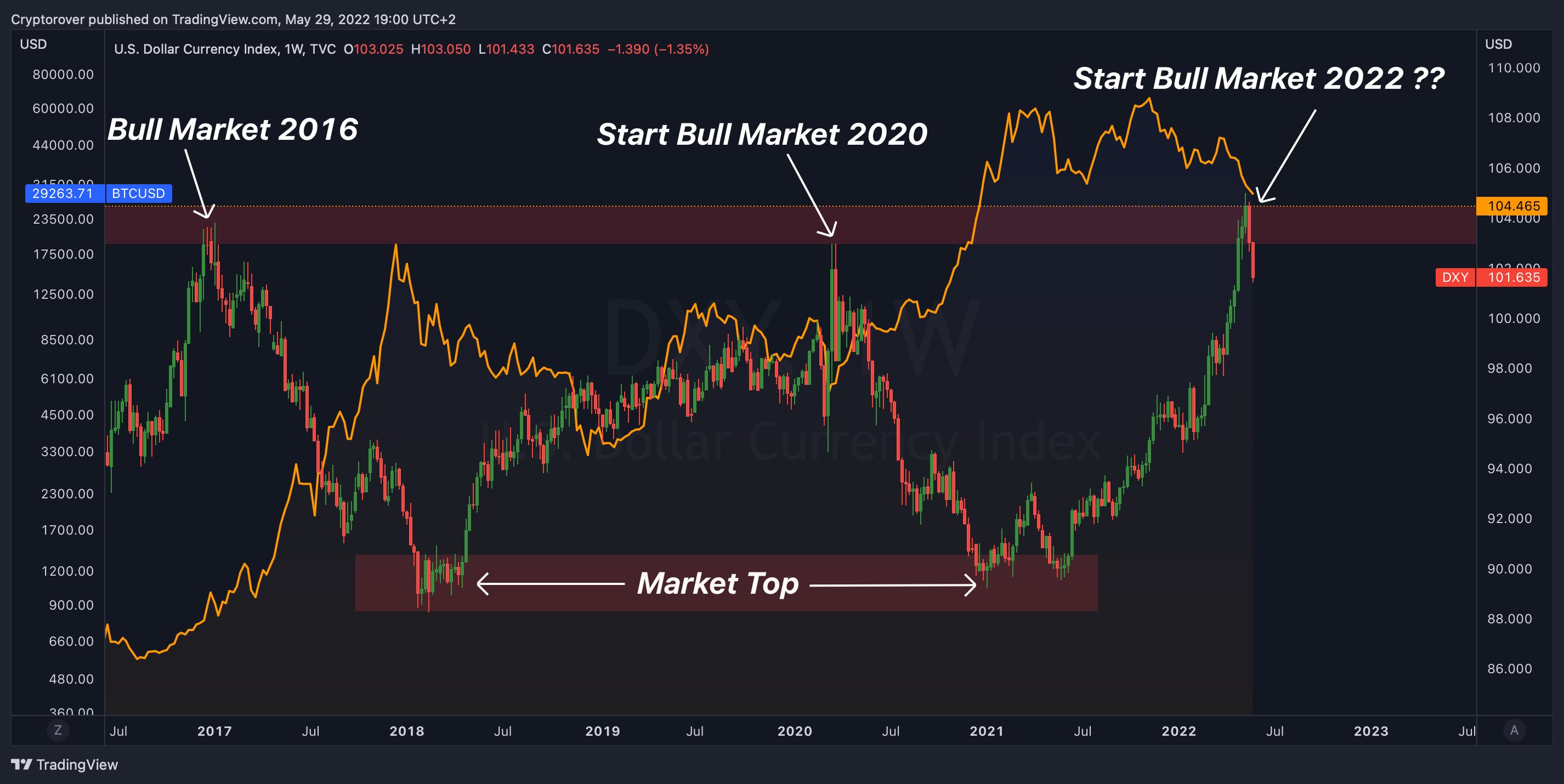 Crypto Ed, however, is not convinced that the good times will be back courtesy of ongoing dollar weakness.

“DXY is printing a reversal pattern, a falling wedge. Another reason for not being too enthusiastic for BTC,” a further tweet added. 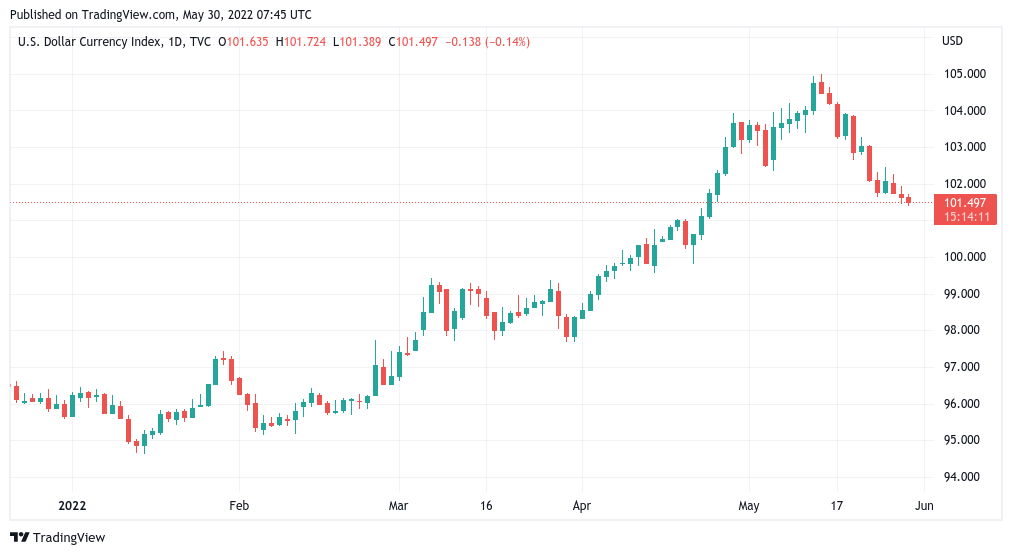 Not everyone is bearish among Bitcoin analysts, and one of them, CryptoQuant CEO Ki Young Ju, has the data to prove why.

Uploading the latest readings from Bitcoin’s realized cap distribution, Ki argued that in fact, BTC/USD is currently at a similar stage to March 2020.

Realized cap reflects the price at which each bitcoin last moved, and can be broken down into age bands.

These in turn show the proportion of the BTC supply that makes up its realized cap which last moved a certain length of time ago.

For Ki, this signifies floor territory for BTC price, as has been the case historically — and most significantly during the March 2020 COVID-19 crash.

“$BTC is getting close to the cyclic bottom,” he summarized. 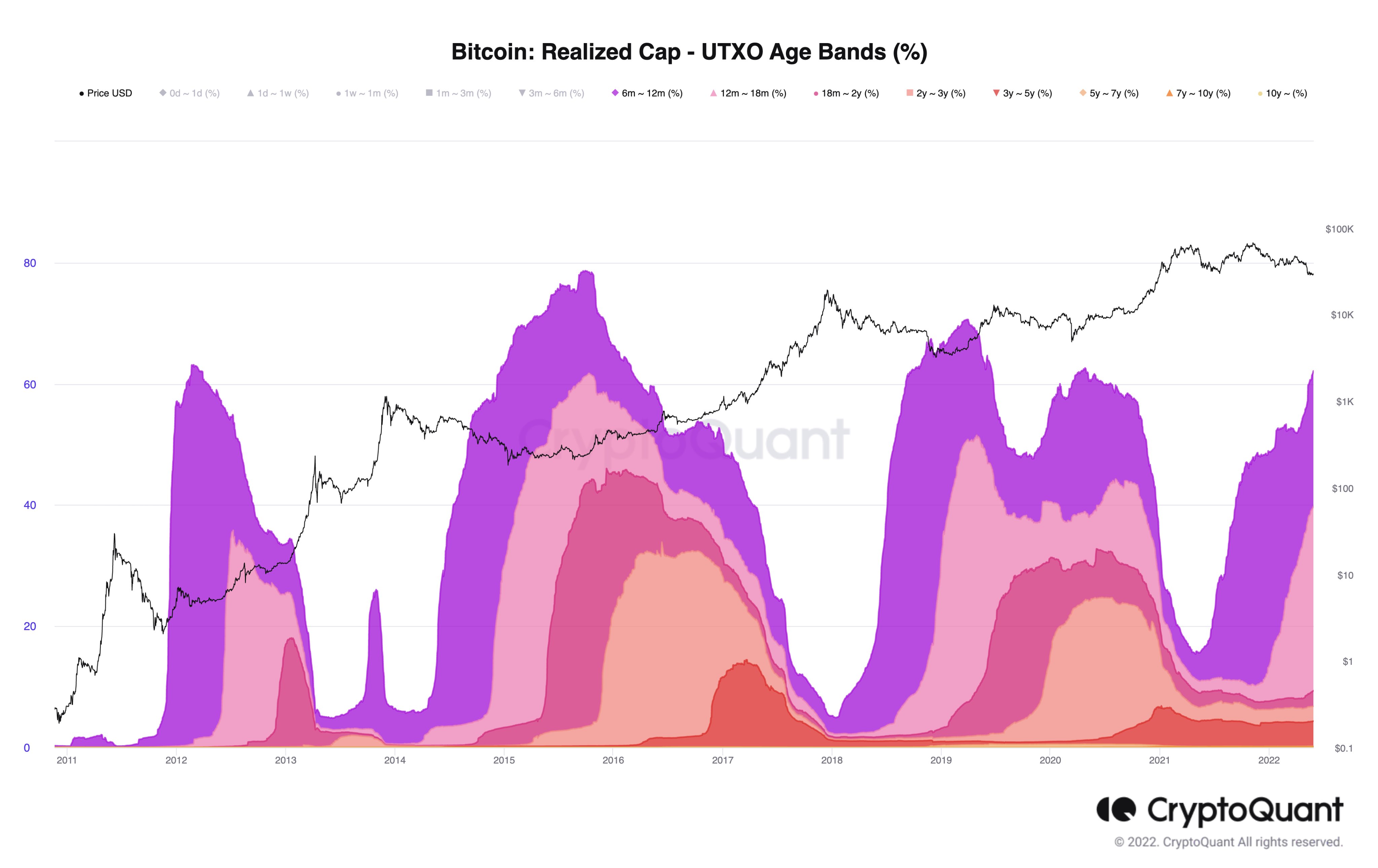 CryptoQuant previously reported on UTXO data as it relates to the size of Bitcoin investor holdings, but drew more conservative conclusions.

Last week, it appeared that the largest Bitcoin whales were still distributing their holdings on-chain, while smaller whales could likely be propping up the market and preventing a March 2020-style cascade.

It takes a lot of bullish price action to shift sentiment into the green in the current environment.

This goes for both Bitcoin and crypto more widely, as investors have endured over six months of what has been practically unchecked downside.

This remains the case this week — despite the overnight move up, sentiment remains firmly in the “extreme fear” zone across Bitcoin and altcoins.

The Crypto Fear & Greed Index is at just 10/100 as of May 30, a score which has accompanied generational price bottoms in previous years.

May 2022 has been a particularly harsh period for sentiment, with Fear & Greed hitting just 8/100 earlier in the month — a level rarely seen and which last appeared in March 2020.

Commentator and analyst Scott Melker, known as the Wolf of All Streets, added that regardless of what might come next, sentiment revealed a “long term buying opportunity.”