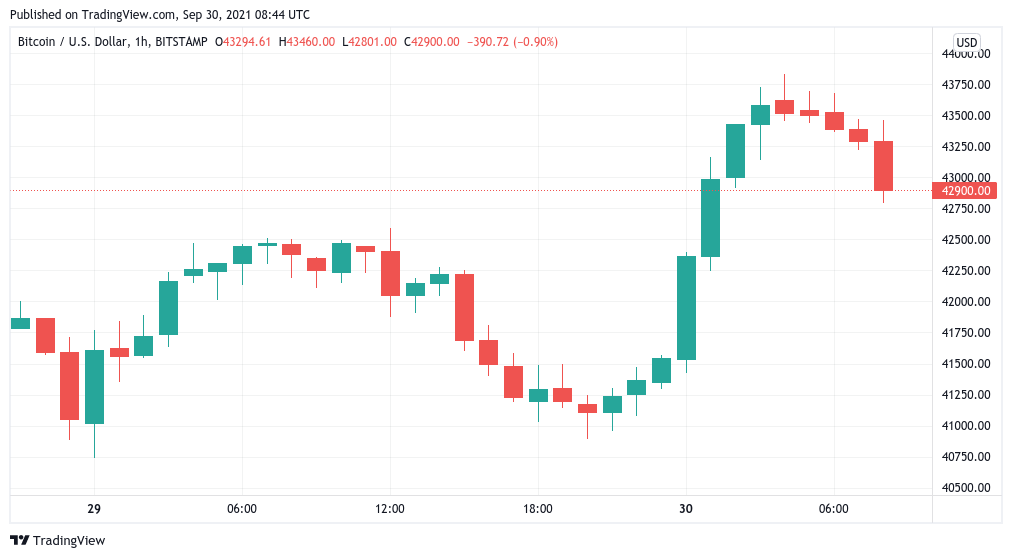 Data from Cointelegraph Markets Pro and TradingView showed BTC/USD losing the $43,000 level following the news after hitting local highs above $43,800 on Bitstamp.

With the source of the issue unknown at the time of writing, traders were left in the dark as an already sensitive crypto market fell back toward established support.

“We are investigating issues with the platform and have to temporarily halt trading,” Bitfinex wrote as part of its latest service update.

Tuesday had seen fellow exchange Binance, the largest by volume in the world, suspend trading for two hours as part of scheduled maintenance, this having no significant impact on BTC price action.

With Thursday already set to be a charged day, however, Bitcoin looked set to close out September almost exactly at its predicted “worst-case scenario” price of $43,000.

In so doing, the largest cryptocurrency would once again validate predictions made by stock-to-flow model creator PlanB, who also correctly estimated the August close of $47,000.

Meanwhile, the overall character of the Bitcoin market was still far from bearish for most.

Despite lackluster price action, the odds remain for a dramatic return to form in the coming weeks and months, with comparisons to the same period in 2020.

The latest was from Cole Garner, who noted that the large block of buyer support just below $40,000 was reminiscent of the order book setups when BTC/USD was at $10,000 in September last year.