Presently, there seems to be a general assumption that when the U.S. dollar value increases against other global major currencies, as measured by the DXY index, the impact on Bitcoin (BTC) is negative.

Traders and influencers have been issuing alerts about this inverse correlation, and how the eventual reversal of the movement would likely push Bitcoin price higher.

Analyst @CryptoBullGems recently reviewed how the DXY index looks overbought after its relative strength index (RSI) passed 78 and could be the start of a retrace for the dollar index.

Correlation changes over time, despite the general inverse trend

The periods of inverse movements between Bitcoin and the DXY index have never exceeded 36 days. The correlation metric ranges from a negative 1, meaning select markets move in opposite directions, to a positive 1, which reflects a perfect and symmetrical movement. A disparity or a lack of relationship between the two assets would be represented by 0.

The metric has been below negative 0.6 since Aug. 19, indicating that both DXY and Bitcoin have generally followed an inverse trend. In fact, the longest-ever period of inverse correlation has been April 14 to May 20.

Saying that Bitcoin holds an inverse correlation to the DXY index would be statistically incoherent since it had a negative 0.6 or lower in less than 30% of the days since 2021.

The dollar strengthened after the FOMC minutes

On Aug. 17, officials at the United States Federal Reserve indicated that additional interest rate hikes would be needed until inflation eased substantially, according to the minutes from the July 27 meeting. 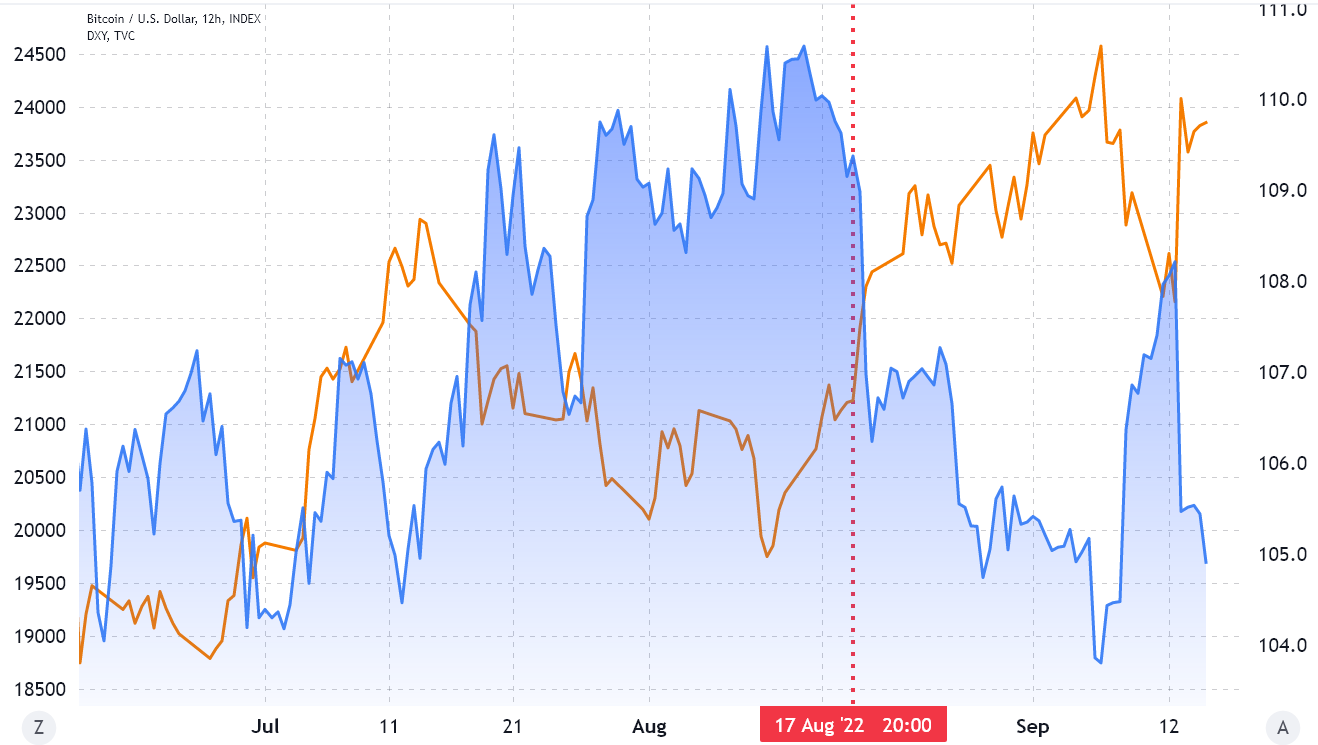 The report caused the U.S. dollar to appreciate versus major global currencies, as the market gave the Fed a vote of confidence. Meanwhile, Bitcoin dropped 11% in two days to $20,800, reinforcing the inverse correlation thesis.

Still, a correlation does not imply causation, meaning it is impossible to conclude that the DXY’s positive performance negatively impacted the Bitcoin price after the minutes from the Federal Reserve meeting were released.

Correlation should not be used to predict short-term moves

Even though pundits and influencers often use 20-day correlation data to explain daily price movements, one should analyze a more extended timeframe to understand the potential impacts of the DXY index on Bitcoin price.

For instance, 2021 presented some positive correlation between the DXY dollar index and Bitcoin. Maybe some of the movements were anticipated by either side, but no extended periods of inverse correlation were present.

More importantly, events solely relevant to the cryptocurrency might have distorted the metric, such as the first U.S. Bitcoin exchange-traded fund launch on Oct. 19, 2021. Other examples include Tesla announcing a $1.5 billion Bitcoin investment on Feb. 8, 2021.

Moreover, analysts point to the Chinese crackdown on mining in May 2021 as the culprit for the market downturn below $40,000. Those events could not have been anticipated by the DXY dollar index, so any ongoing correlation might have had little impact during those periods.

Consequently, those waiting for a turnaround on the DXY index before placing bets on a Bitcoin rally have no statistical backing. Whenever positive (or negative) developments specific to the cryptocurrency industry take place, the historical correlation loses relevance.