Cardano (ADA) appears to be heading toward a new record high as its downside move takes the shape of a bull flag.

In detail, the ADA/USD exchange rate plunged 16.91% to $2.47, but the pair’s decline came after a strong move higher, wherein it surged over 120% month-to-date to reach an all-time high of $2.97 on Monday. Therefore, the latest declines have given the impression that Cardano is undergoing a brief pause before it resumes its uptrend.

Part of the upside analogy stems from the downward sloping channel itself — two parallel trendlines enveloping the price moves. In addition, the consolidation accompanies falling volumes, indicating a weaker response from traders to pursue the downtrend.

As a result, the shape appears like a bull flag, as shown in the chart below. 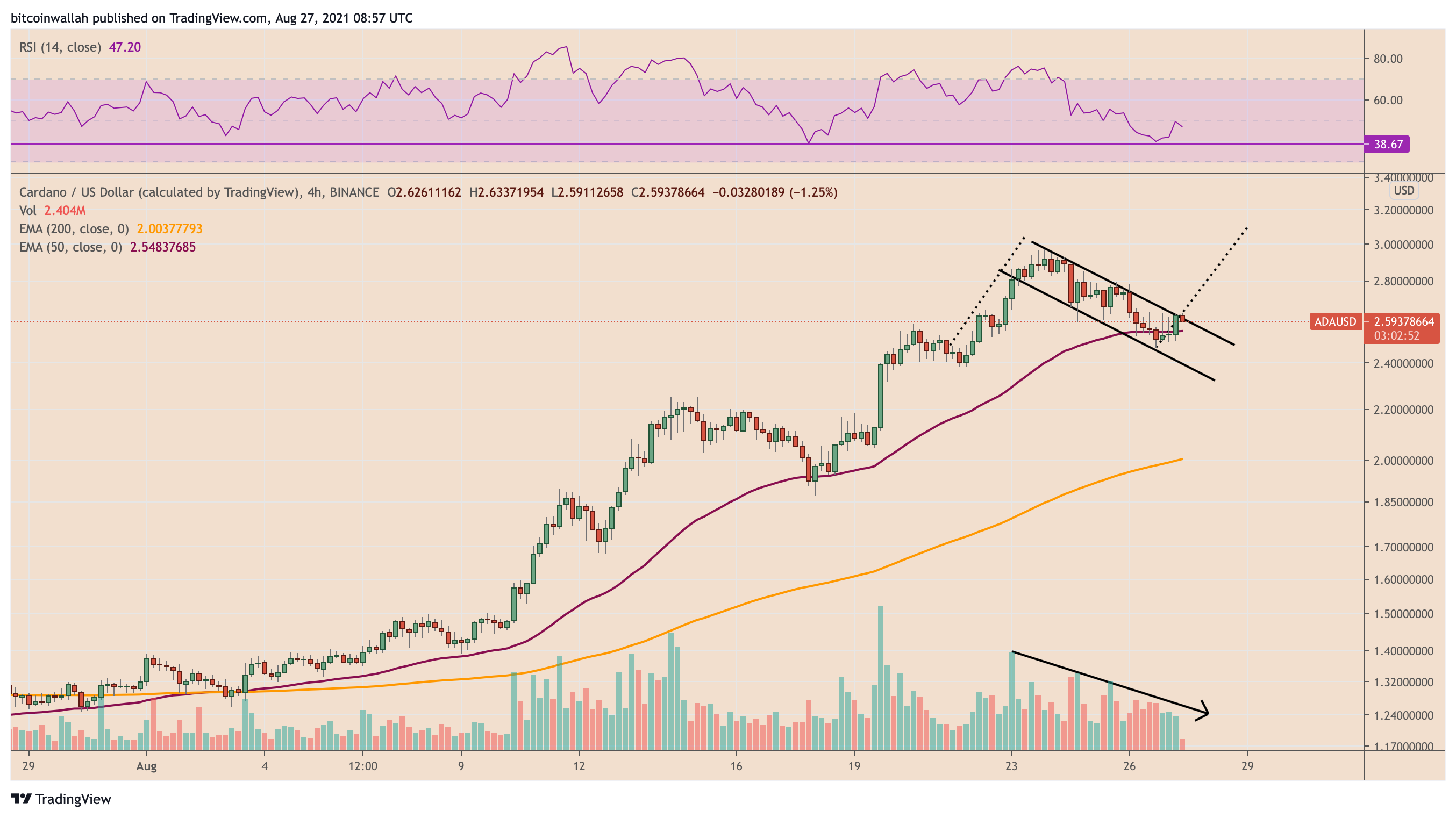 Typically, bull flags prompt traders to enter the market at the pattern’s bottom or breakout above the upper trendline’s high. In doing so, traders target levels located at a distance equal to the size of the flag pole — i.e., the height of the uptrend that preceded the bull flag formation.

More bullish cues come from the 50-4H exponential moving average (50-4H EMA; the velvet wave). Traders have shown their intention to hold 50-4H EMA as interim support, somewhat validating a breakout move for ADA/USD if it manages to float above the wave.

Additional support confluence for ADA/USD comes from the ascending channel’s lower trendline shown in the chart below. The pattern points toward a major price rebound, with a profit target at its upper trendline. 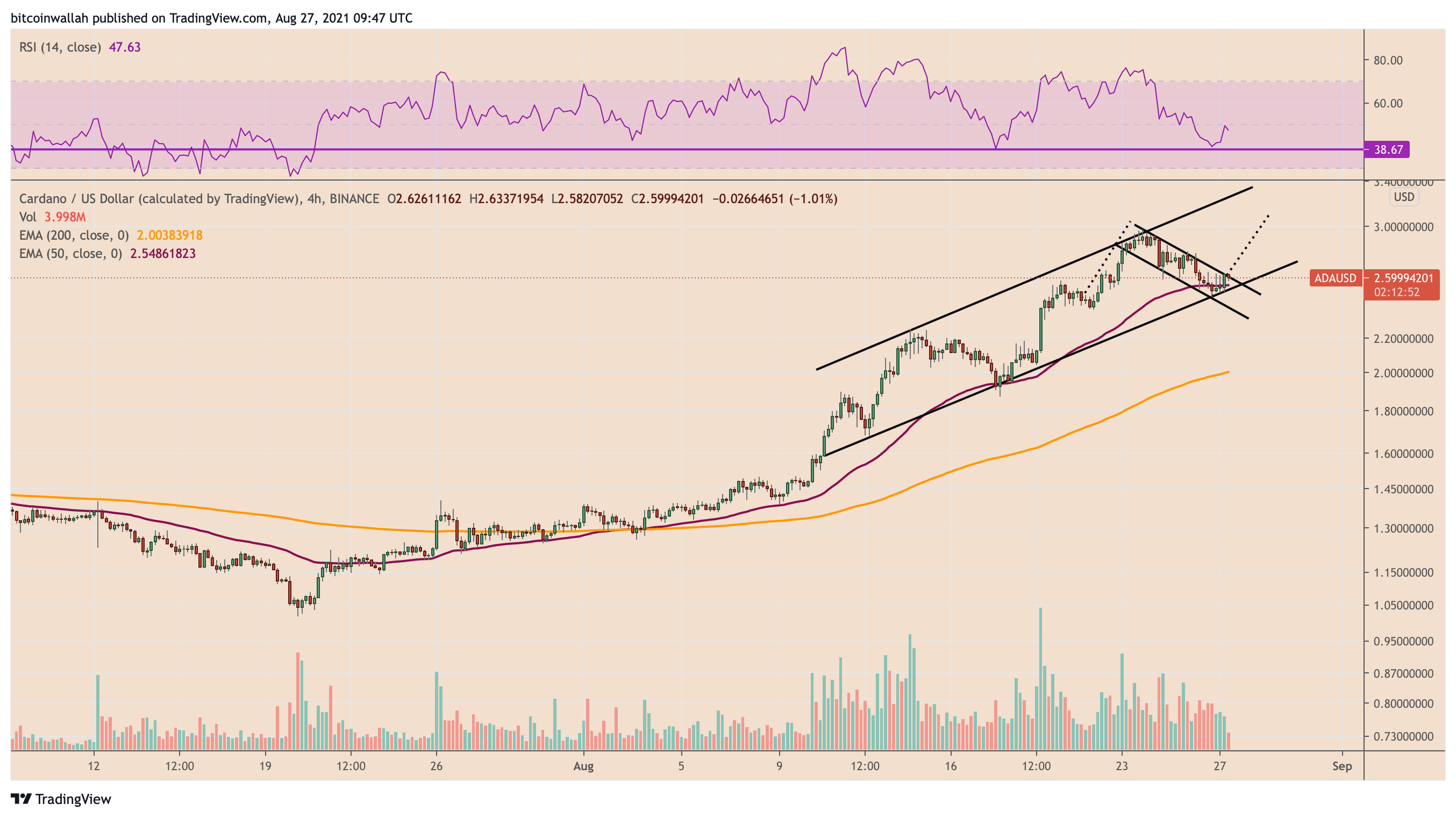 In doing so, it could have ADA achieve its bull flag target midway.

The news boosted hopes that Cardano would be able to rival Ethereum, the biggest smart contracts platform, which has lately struggled with network congestion and higher transaction fees. As a result, demand for Cardano’s native asset, ADA, has been steadily growing.

In the latest Cardano 360 event, its top executives announced further plans to attract Ethereum blockchain users. Francisco Landino, project manager at IOHK — the research and development arm behind Cardano — said Cardano would launch the testnet of an ERC-20 migration tool next week.

As a result, users will be able to transfer their Ethereum standard tokens (ERC-20) to Cardano’s native blockchain. SingularityNET, a decentralized artificial intelligence network, will migrate its native token, AGIX, from Ethereum to Cardano.

During the event, Cardano founder Charles Hoskinson also said that over 100 companies have been planning to move to Cardano in the coming months.

The upside outlook also came amid concerns over Cardano’s efforts to gain legitimacy from financial regulators despite championing itself as a “decentralized public blockchain.”

Namely, the Cardano Foundation has partnered with Confirm, a blockchain analytics firm, to boost its compliance efforts to fall in line with the Financial Action Task Force’s guidelines. Nevertheless, Weiss Crypto Ratings, a rating agency for cryptocurrencies, warned that Cardano’s decision would make its network “censorship-prone, politicized, and manipulated.”