The price of Binance Coin (BNB), the native cryptocurrency of Binance and Binance Smart Chain, rallied by more than 20% in the last 24 hours. 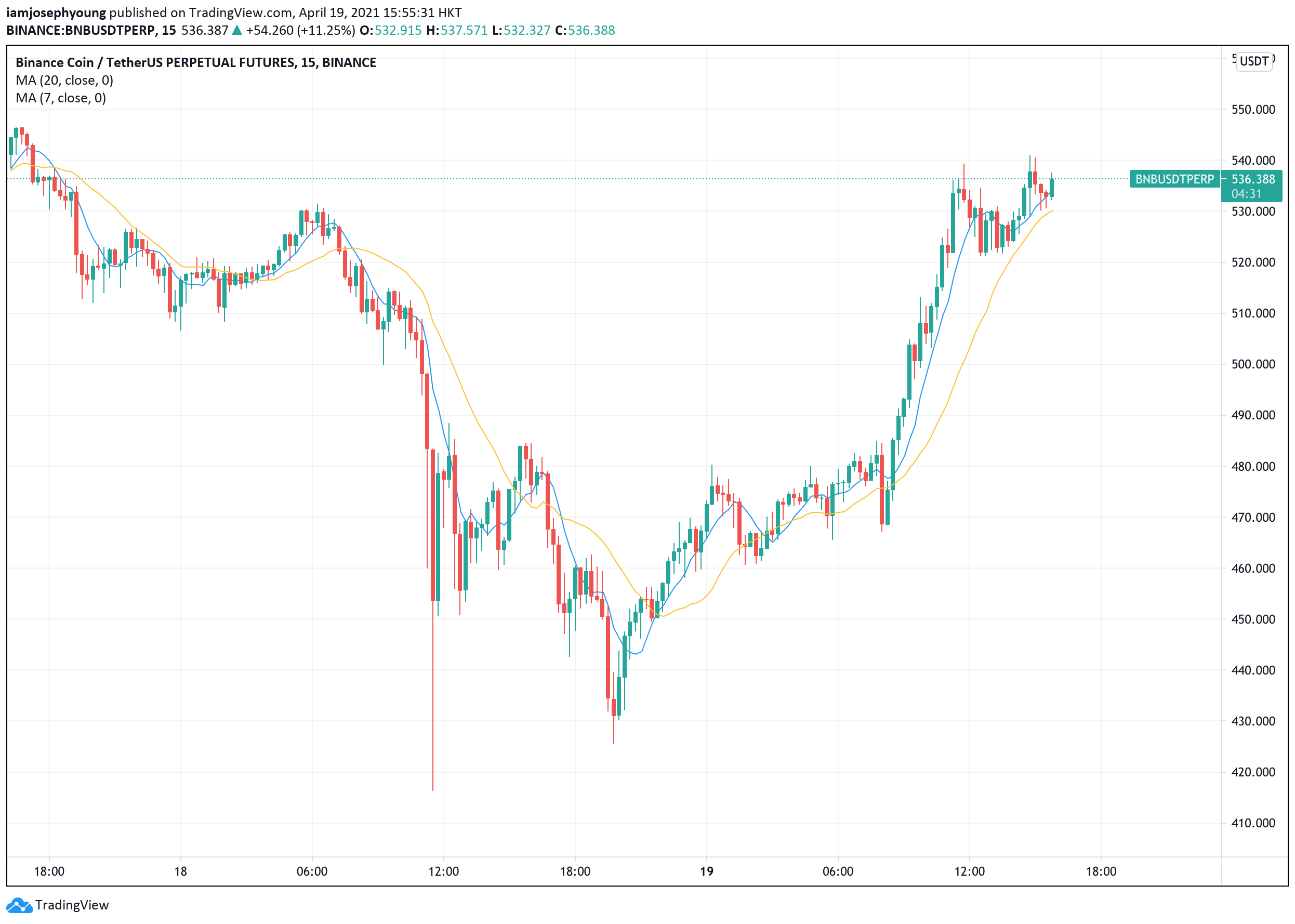 The swift recovery comes after a market-wide correction on April 18, during which major cryptocurrencies including Bitcoin (BTC) and Ether (ETH) saw a sharp decline.

Overheated futures market gets a reset

The market saw a steep pullback in a short period because the futures market was extremely overheated.

Over $10 billion worth of cryptocurrency positions were liquidated on a single day, with Bitcoin accounting for over $5 billion of it.

Since the drop was more technical than fundamental, and it was a cascade of liquidations that caused the pullback, the market pared most of the losses relatively quickly

“I think what we saw was a cascade of tightly wound retail positions on a weekend market, get toppled, but somewhere along the line, there was a matching book fail that caused stop-losses to not get hit and when that happened it put a massive $63M position in jeopardy.”

He added that the liquidation of a $63 million position shocked the market, which put even the major cryptocurrencies at risk of a speedy drop.

“That $63M position getting liquidated is what put the market in major jeopardy, but by that time there was already degraded performance issues connecting to Binance and spiking gas fees. So there was very little way for anyone to backstop or arbitrage that liquidation.”

While Bitcoin and Ether rebounded relatively quickly by 12% and 15% from their respective lows , BNB outperformed both BTC and ETH within the past 24 hours in its recovery.

The strong performance of BNB stems from two positive catalysts: the record $600 million BNB burn by Binance and the uptrend of Binance Smart Chain metrics.

On April 16, Cointelegraph reported that Binance burned $600 million worth of BNB in the first quarter of 2021, which reduces the circulating supply and suggests the exchange generated at least $750 million in quarterly profit.

Moreover, Binance CEO Changpeng Zhao emphasized yesterday that the Binance team has no plans to sell their BNB holdings, 40% of the total supply, in a likely dig at Coinbase insiders reportedly selling $5 billion worth of COIN shares last week.

Hence, when the market started to recover, BNB saw a stronger rally possibly as a result of a delayed response to the $600 million burn.

Atop the token burn, the daily number of transactions on Binance Smart Chain surpassed 5 million.

Since BNB is also the native token of the Binance Smart Chain blockchain network, rising user activity positively affects the value of BNB, contributing to its recovery.

Traders were ready to buy the dip

A pseudonymous trader known as “Altcoin Psycho” stated that traders were ready to buy the dip in the altcoin market.

“Traders were ready to buy the dip. Was anticipating a market dip all week, yet I got lazy and did a bad job positioning myself for success. Had 10+ alts on my list, only set bids for eth. Thankfully experienced minimal drawdown tonight, but still really played this opportunity poorly. Good learning lesson here.”

The quick inflow of capital into the altcoin market shortly after the dip led many altcoins to recover swiftly, which likely catalyzed BNB’s upsurge.