The cryptocurrency had climbed by more than 150 percent from its mid-March lows. But the gains have appeared almost in tandem with the U.S. stocks. Observers, including legendary investor Warren Buffett, believe the stock market sentiment has divorced the economic reality.

It means a more substantial correction could be underway.

That puts Bitcoin in a tricky spot – fundamentally. A crash in the U.S. equities could lead investors to offload their profitable positions in the cryptocurrency market for cash. Therefore, the correlation between the two could continue even in times of distress.

The analogy came stronger this week when both Bitcoin and the S&P 500 moved hand-in-hand. On Thursday, the benchmark cryptocurrency fell by 1.20 percent to $9,263, while the trendsetting U.S. index closed 0.1 percent lower to 3115.34 points.

But while the S&P 500 slipped because of fears over the rising number of virus cases in the U.S. amid reopening, Bitcoin plunged on profit-taking sentiment. Traders failed to hold above a critical technical resistance level of $9,500, which led to a downside correction of circa $300.

As Bitcoin’s bearish moves broadened, its four-hour chart left behind hints of a further aggressive price crash in the coming sessions. 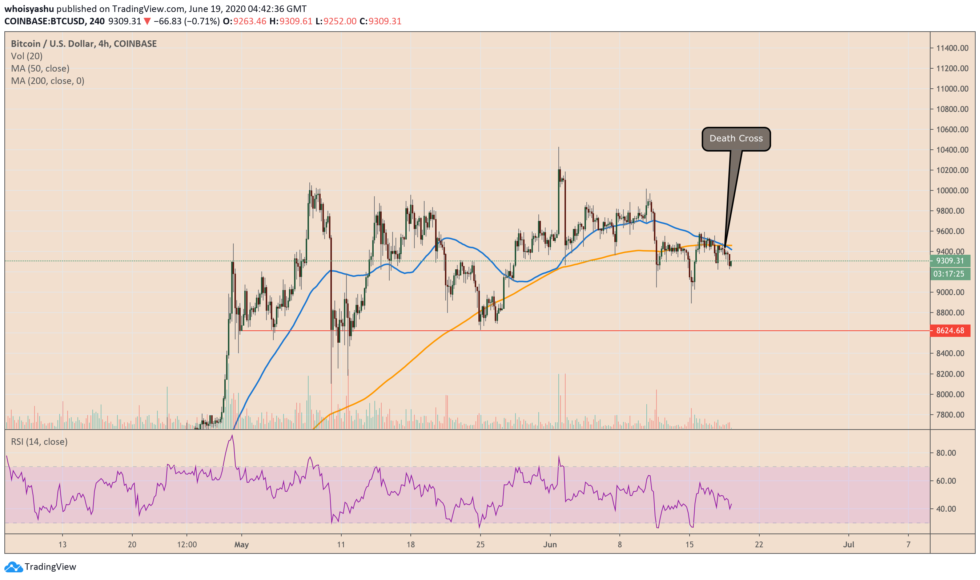 Its last occurrence in February 2020 had led the bitcoin price lower by more than 50 percent. The crash had also appeared out of a global market rout – a black swan event that prompted investors to dump every possible asset to raise cash. Nevertheless, the 50-200 Death Cross asserted its role in the wild downside move.

In the current scenario, Bitcoin is surrounded by similar technical and macroeconomic risks. The number of virus cases is rising while the global economy has entered a recession. The only thing that is saving the cryptocurrency from crashing is the stimulus policies launched by central banks.

Investors don’t need cash, which may limit Bitcoin’s bearish bias to a certain extent. Meanwhile, the cryptocurrency is trending inside a bullish pattern, the so-called Falling Wedge, that envisions the price back above $10,500. 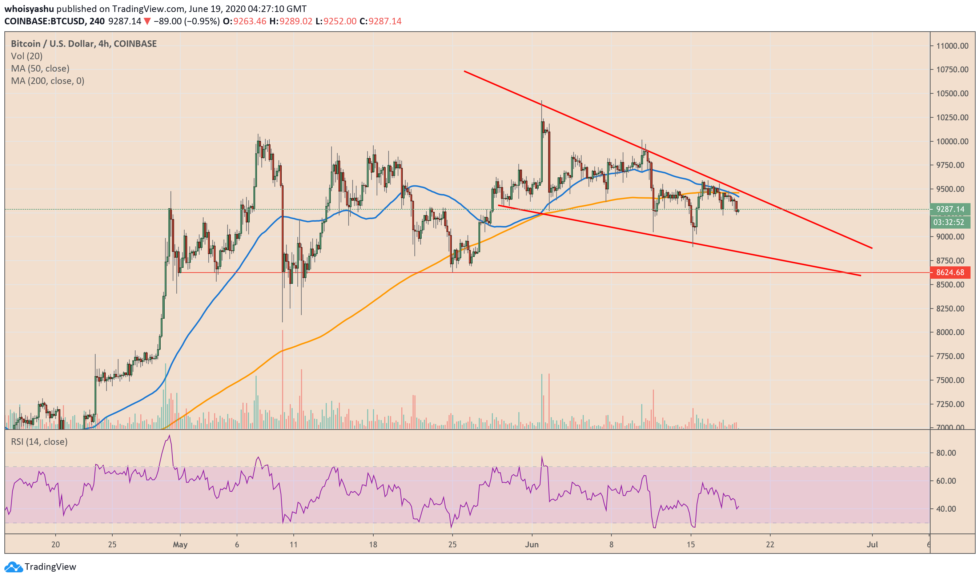 But the same indicator first needs to send Bitcoin lower. The cryptocurrency has recently rejected the Wedge resistance to test its lower trendline. It may continue heading downwards within the Wedge parameters until it comes closer to the pattern’s apex – the point where its upper and lower trendlines converge.

That hints Bitcoin has room to fall towards $8,600, a dependable support level which also coincides with the lower trendline of the Falling Wedge. The Death Cross, at the same time, maybe targeting the $8,600 level for its next pullback move.