The price of Bitcoin (BTC) rose to as high as $15,840 before crashing to $14,800. Just five hours after reaching an intraday top, the dominant cryptocurrency dropped over 6%. This massive spike in volatility was likely caused by three major factors.

The three catalysts for the abrupt downtrend were the recovery of the dollar, the decline in gold price as Pfizer announced that its COVID-19 vaccine trials are producing positive results, and whales dumping BTC. 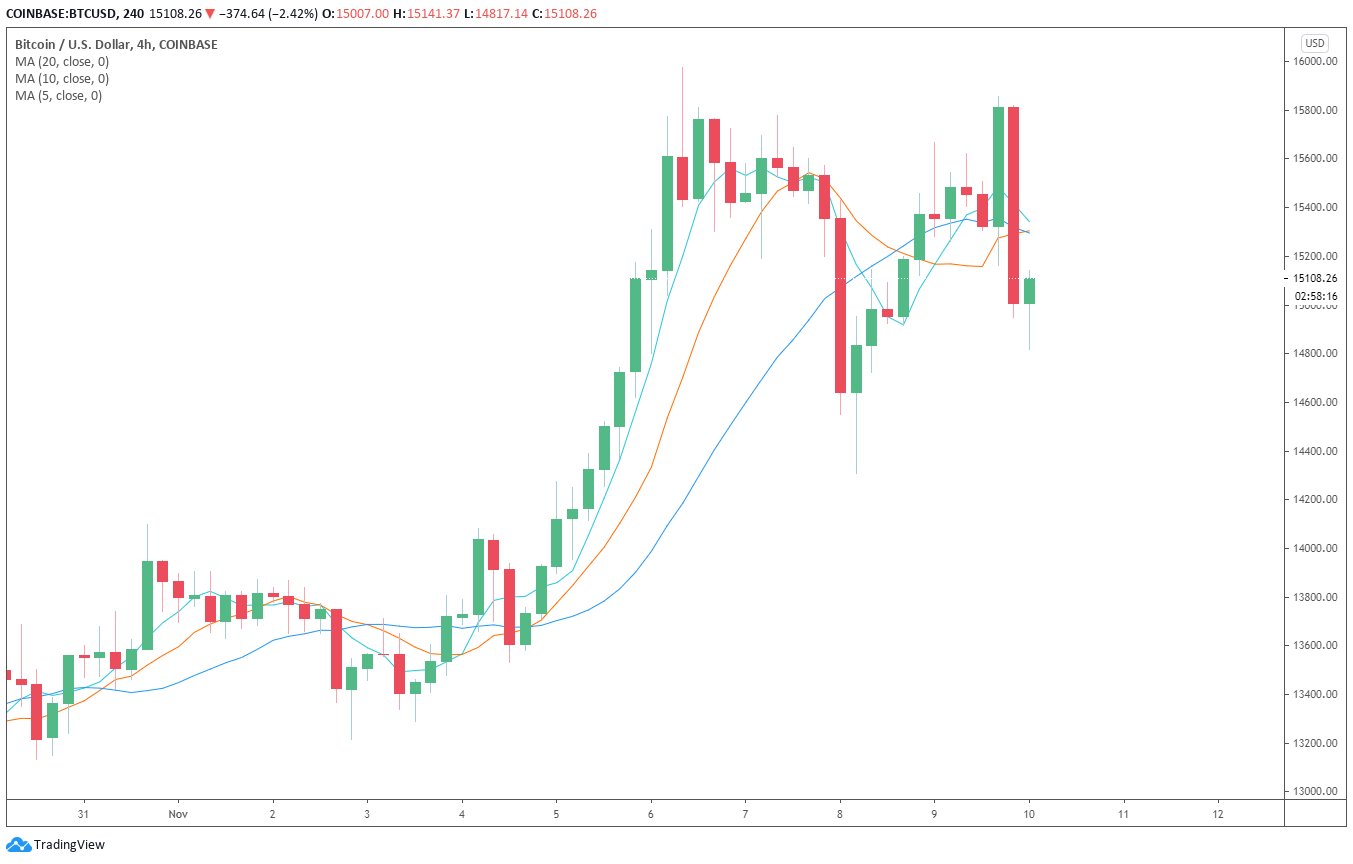 According to the Associated Press, Pfizer announced that the third phase of its vaccine trials is going well. The pharmaceutical giant said its vaccine is currently proven to be 90% effective in COVID-19 prevention.

To date, Pfizer has tested the vaccine on  44,000 participants, and if it proves effective, the next step would be for the United States Food and Drug Administration to conduct its own tests before approving the vaccine for mass production and distribution.

Michaël van de Poppe, a full-time trader at the Amsterdam Stock Exchange, pinpointed the recovery of the U.S. dollar index and suggested that alternative stores of value, like gold and Bitcoin, are priced against the dollar. As such, when the dollar recovers, the price of BTC could fall steeply alongside precious metals.

“There we seem to go. $DXY bouncing up as there’s more certainties at this point, through which assets like #bitcoin, gold and silver drop down substantially. A correction on $BTC would be tremendous and a great opportunity in general.”

When the drop occurred, CryptoQuant, an on-chain market analysis firm, found that whales were selling Bitcoin.

Whales had several attractive reasons to sell BTC at $15,800. First, it is a major resistance area right below a pivotal level at $16,000. If the $16,000 level breaks, technical analysts have said BTC would likely position for an all-time high.

When whales sell, the market often sees a strong reaction. Whether whales would begin to take profit on their shorts and attempt to resume the bull trend remains unclear. For now, the pullback has stalled, with BTC recovering above $15,100, indicating a short-term trend reversal to the upside.

Despite the heightened level of volatility in the market, cryptocurrency trader Cantering Clark emphasized that long-term investors are unlikely to be fazed. He said:

“This volatility is just fast money funds that play $BTC as a higher beta $GOLD dumping on vaccine news. The players that enter on behalf of the longer-term thesis for Bitcoin are not changing their positioning.” 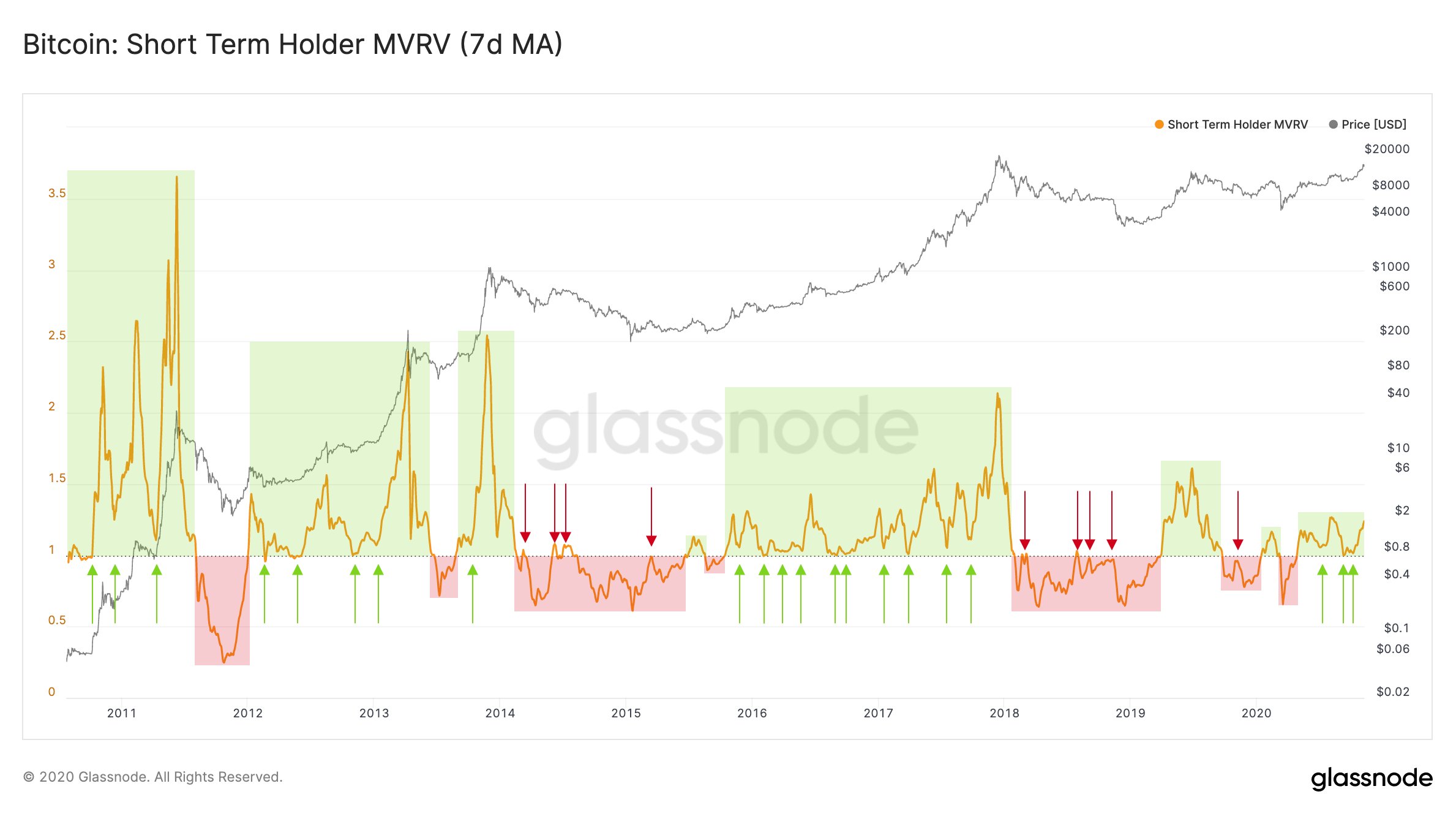 In addition to the factors mentioned above, analysts at Glassnode noted that the current short-term holder activity is reminiscent of previous bull trends. As such, if BTC recovers strongly from the recent drop, the chances of a rally continuation could increase. Glassnode said:

“#Bitcoin Short-Term Holder MVRV has been holding its positive ratio for the past six months — and bounced off the neutral line yet another time. Historically, holding this support level is indicative for an ongoing $BTC bull market.”