2021 was a sort of “coming-of-age” for many layer-one (L1) blockchain protocols because the growth of decentralized finance (DeFi) and nonfungible tokens (NFTs) forced users to look for solutions outside of the Ethereum (ETH) network where high fees and network congestion continued to be barriers for many.

Protocols like Fantom (FTM), Avalanche (AVAX) and Cosmos (ATOM) saw their token values rise and ecosystems flourished as 2021 came to a close. Meanwhile, popular projects like Polkadot (DOT) underperformed, comparatively speaking, despite the high expectations many had for the sharded multi-chain protocol. 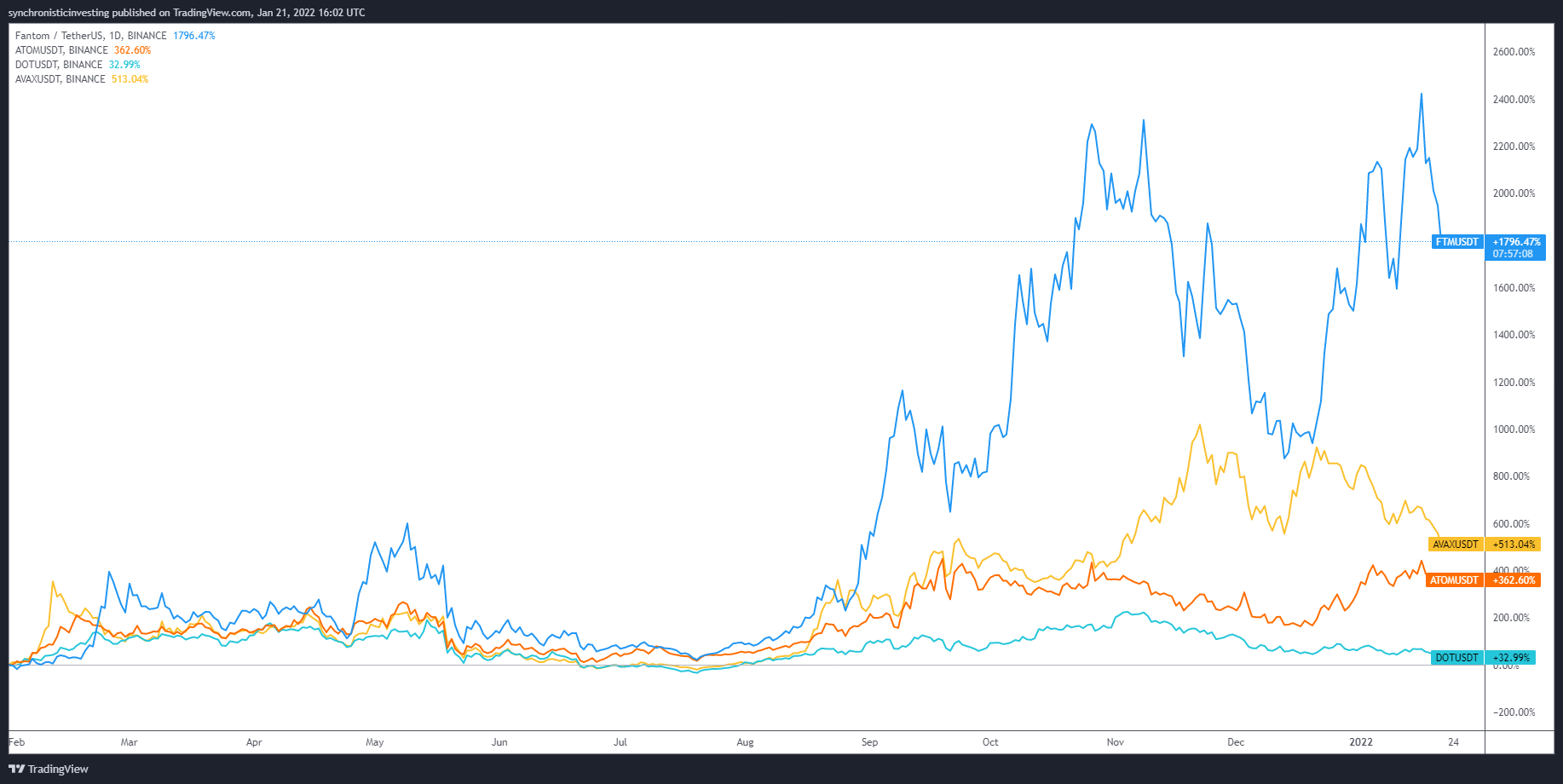 Setting aside the specific capability that each protocol offers in terms of transactions per second and time to finality, here are several factors that may have played a role in DOT’s laggard performance when compared to other L1 competitors.

Interoperability is a key factor

One of the major themes of 2021 was cross-chain interoperability between separate blockchain networks, with a bridge to Ethereum being the most important connection to establish due to the fact that a majority of projects currently run on the network.

Protocols like Fantom, Binance Smart Chain, Avalanche and Harmony developed cross-chain bridges and this led to a noticeable bump in their token price, total value locked and on-chain activity.

Despite the fact that Polkadot was specifically designed to offer multi-chain support as a “layer-zero” meta protocol, there was no major release of a bridge that connected Polkadot with Ethereum in 2021 and this left the protocol unloved by crypto traders looking to engage with DeFi and NFTs.

Cosmos, likewise, didn’t see the release of a major bridge that connected its ecosystem with Ethereum, but there were minor integrations like the addition of Ether as a collateral asset on Terra which demonstrated that cross-chain compatibility was possible.

The late launch of parachain auctions

As 2021 came to a close, all of the previously mentioned networks were seeing a healthy amount of activity and cross-protocol interactions while projects on Polkadot were still finalizing their preparations to launch on the mainnet.

This was in part due to the fact that the parachain auctions for Polkadot didn’t begin until November 11 when Moonbeam (GLMR), an Ethereum-compatible smart contract parachain, secured the first slot.

DOT saw its price rise to an all-time high of $55 on Nov. 4 as those interested in contributing to the parachain auctions secured their tokens, but by the time the auctions had officially started its price was already on the downslope toward a low of $23.28 on Jan. 10.

Moonbeam official went live on the Polkadot network on Jan. 11 and has managed to rack up more than 1 million transactions as users were finally able to transfer ERC-20 tokens into the Polkadot ecosystem.

The price of DOT saw a slight bump higher following the launch of Moonbeam but has once again slid back down below $25.

The benefits of holding DOT

A third factor that may be weighing on the popularity and price of DOT is confusion about what the token is used for and what benefits it provides to token holders.

On many of the competing networks, the native token is used to conduct contract actions such as token transfers or swaps whereas protocols that are in the Polkadot ecosystem use their native tokens to pay for gas.

Aside from being used to participate in parachain auctions, the main uses for DOT include staking to support the operation and security of the network and for use in governance votes.

While governance abilities are important for the overall health of blockchain protocols, the average cryptocurrency users still haven’t shown much enthusiasm for participating in votes and are more interested in things like gaming, DeFi and NFTs.

Multiple layer-one solutions are launching developer and liquidity incentive programs and up and coming DeFi protocols are still offering high yield staking opportunities. Currently DOT offers 13.94% APR to stakers and its possibly that this is not enough to satisfy the appetite of yield farmers who are looking to get more bang for their buck.

The long-term outlook for Polkadot remains strong and the project has an active and dedicated community of followers to go along with an experienced development team led by Ethereum co-founder Dr. Gavin Wood.

The launch of Moonbeam might indeed mark a turning point for DOT as cross-chain compatibility is now live and other parachain projects should start to launch on the mainnet shortly, but it remains to be seen how long it will take the network to catch up to its L1 competitors who have a head start on cross-chain interactions and increased on-chain activity.