In the spirit of Valentine’s Day, Tesla received a noteworthy present from Bitcoin, almost too early. The leading electric car company recorded 40% in gains, following its recent Bitcoin investment of $1.5 billion.

It is safe to say that Tesla’s bet on Bitcoin is paying off gradually, despite a handful of skeptics asserting that the bet could easily cost the company more than it invested. Ex-Bitcoin miner Alex Pickard, whose sentiments are reflective of the above assertions, responded to the news of Tesla’s Bitcoin investment, saying that “unless a company’s business model is a cryptocurrency hedge fund, it shouldn’t be making speculative bets on Bitcoin.”

What is next for Tesla?

As Tesla becomes the first Fortune 500 company to include Bitcoin in its balance sheets, many from the crypto-space and the traditional market have their eyes peeled on the result of the firm’s big move. Skeptics have implied that at Bitcoin’s current pace, a price decline could kick in at any point.

On the other hand, institutional money set to enter the market is predicted to be valued at a gigantic sum. However, Tesla is fairly new to the crypto-market, although the Bitcoin purchase was made a week ago. The electric car company may not influence the traditional market to follow in its footstep as many expect. This may be due to its position as the first major cooperation in its industry to take a deep dive into the Bitcoin market. The next few months will however play a major role in influencing similar firms. If Bitcoin’s price continues its upward rally to the moon, it could be safe to say that Tesla made a smart bet. 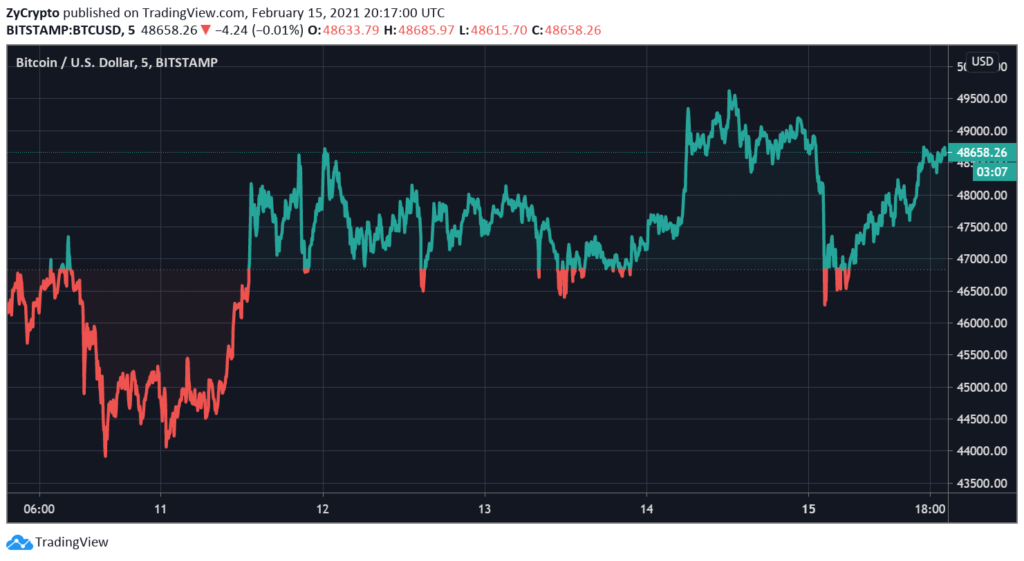 The price of Bitcoin is hinged on many fundamental factors that have historically swayed the market. One of these, according to recent data published by Glassnode’s On-chain analytics, is yet to imitate some of the crucial patterns on the chart.

Glassnode’s tweet reads; “Previous Bitcoin bull markets are characterized by fingerprints of increased miner outflows of $BTC that had been acquired throughout prior years. Even though we’re seeing slightly higher outflows of older BTC, this same pattern has not emerged in the current bull market.”

Meanwhile, Bitcoin has been in green for the most part of the month. The dominant asset set a new record on Valentine’s day with a new all-time high of $49,714. The record could still be broken later in the week as Bitcoin gears up for a crossover above $50,000.