After what has now been almost two quarters of an agonizing sell-off, markets seemed to have found solace with Bitcoin staying squarely atop the $28,000 level.

Last week the market extended its losses as a result of the fear, uncertainty, and despair that came with UST and other stable coins de-pegging from the dollar. The selling pressure was also exacerbated by Luna Foundation Guard offloading 80,000 BTC in the course of a few days.

As a result, Bitcoin dropped as low as $26,000 as Ethereum dipped to a multi-year low of $1800. Other cryptocurrencies took the greatest hit with LUNA, the native token for the now embattled Terra eco-system falling to zero.

That said, Bitcoin has however managed to stay above the $29,000 level in the past week, igniting hopes that crypto winter may be coming to an end. This strength has been attributed to a series of events including investors becoming increasingly active as BTC’s price hit its lowest level since December 2020.

According to Santiment, a crypto on-chain data analytics firm, inactive addresses have also roared back to life after a long period of dormancy, sizing up the already mounting pressure to push prices up.

“Bitcoin’s idle addresses have become more active this past week, especially during what was a major capitulation dip last Thursday and Friday. Generally, when age consumed spikes arise during price drops, it’s related to weak hands exiting positions.” Santiment tweeted on May 17. 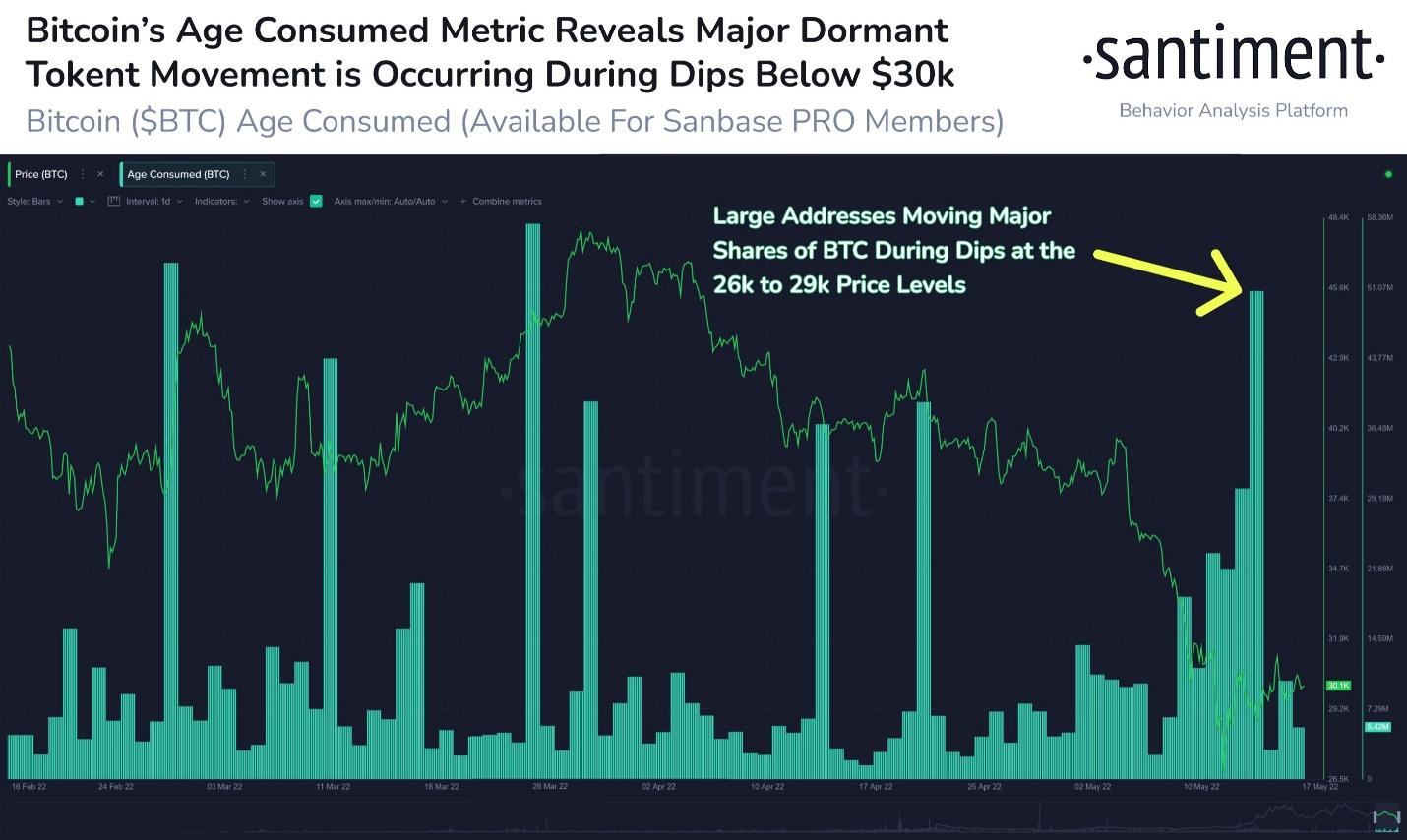 This bustle has coincided with some addresses waking up after more than 8 years of inactivity. In the past four days, Whale Alert has mapped various satoshi era wallets awakening with one which first received 1,000 BTC in 2013 moving more than $30 million in BTC to another address. Late last week, Blockchair also reported that a wallet containing 500 BTC since 2012 had been activated.

According to Checkmate, a crypto quant at Glassnode, the recent dip has had a larger proportion of the market adding to their on-chain balances. On May 12, when the market was at its lowest, the accumulation trend score soared from very weak values below 0.3 to over 0.796, supporting Bitcoin’s bounce back above $30,000. That value has since risen above 0.796 which suggests investors see a lot of buying opportunities in the current capitulation.

That said, it remains to be seen if the market will see a full return to a bullish mode as on-chain data continues to reveal that bulls are not willing to put up in the $20ks range. As of writing, Bitcoin is trading at $29,290 after dropping 2.90%, a day after Fed’s chairman Jerome Powell pledged to keep tightening the bank’s inflation policy.