On Monday, the crypto community marked Bitcoin’s 13th anniversary since the Genesis Block in an event that saw Melania Trump marvel at Satoshi Nakamoto’s life-changing invention.

Sharing a screenshot of Block 0, the first lady, who is now fast becoming a force to reckon with in the blockchain industry, shared her joy over the first block which has now become a central part of Bitcoin’s mystique and mythology. 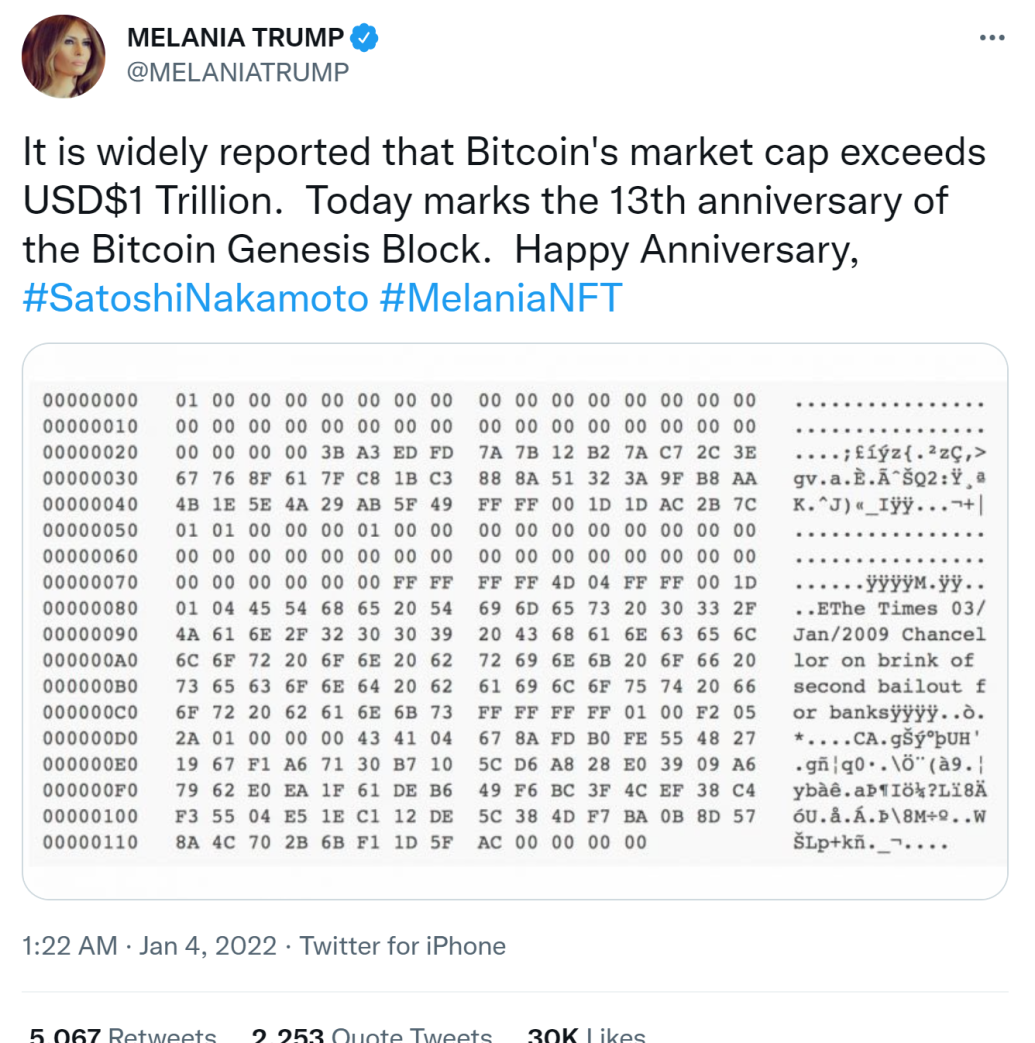 As expected, with Trump’s continued disregard for cryptocurrencies, the former FLOTUS’s comments sparked a range of responses, and being a political figure, her husband’s stance on crypto seemed to dominate most of her tweet’s responses.

“Your husband thinks bitcoin is hugely dangerous to the USD. And he is right. But as it is widely reported, the USD is losing value at a rapid pace. We are going to need something strong to replace it. That’s why Satoshi created Bitcoin” one tweep responded.

The Genesis block as it appears in an old version of Bitcoin “line 1613” is the first block to ever be mined. Satoshi Nakamoto included the headline of that day’s paper in the block.

Although shrouded with mystery, this headline has received a range of interpretations. Some users believe that it is proof that the block was created on January 3, 2009; that it is perhaps a reminder of why Bitcoin is important; while others believe that it suggests that Bitcoin’s creator lived in the United Kingdom.

Initial miner(s) of this block were rewarded with a total of 50BTC sent to a unique address and cannot be spent. No explanation was offered by Satoshi in source code 0.1 as to why the genesis block was to remain unspendable. 18 more Bitcoins have since been added to the address by random users according to verifiable on-chain data.

To date, Satoshi’s reification of his vision for decentralized digital cash continues to baffle many. His decision to have Bitcoin’s design remain unchanged through certain rules like the hardcoded 50BTC Genesis Block, capped supply, reward halvings, and mining difficulty has been one of the secrets to Bitcoin’s success according to experts.

With the crypto community having marked a significant milestone on Bitcoin’s timeline, it will be interesting to see how this nascent technology matures in the next half-decade.