Leading global investment bank and financial services provider Goldman Sachs said that Bitcoin’s spectacular rally in 2020 will not affect major assets in the traditional market such as gold.

In a note to investors, Goldman Sachs reportedly asserted that Bitcoin poses no real threat to Gold, as many international investors continue to cut their investments into gold and adding Bitcoin into their portfolios.

“We do not see evidence that Bitcoin’s rally is cannibalizing gold’s bull market and believe the two can coexist.”

Goldman Sachs is known in the crypto industry for criticizing Bitcoin and saying that cryptocurrencies are not an asset class.

Bitcoin vs. Gold as Inflation Hedges

According to Goldman Sachs, Bitcoin has outperformed gold and other traditional assets, but the role is just temporary substitution due to the ongoing fiat inflation.

“Gold’s recent underperformance versus real rates and the dollar has left some investors concerned that Bitcoin is replacing gold as the inflation hedge of choice.”

Central banks around the world including the Federal Reserve and The Bank of England have been injecting more and more fiat into the economy in fiscal measures against the covid-induced economic downturn. Meanwhile, Bitcoin will be closing 2020 with a new record after surpassing its 2017’s all-time and exceeding $23,000. 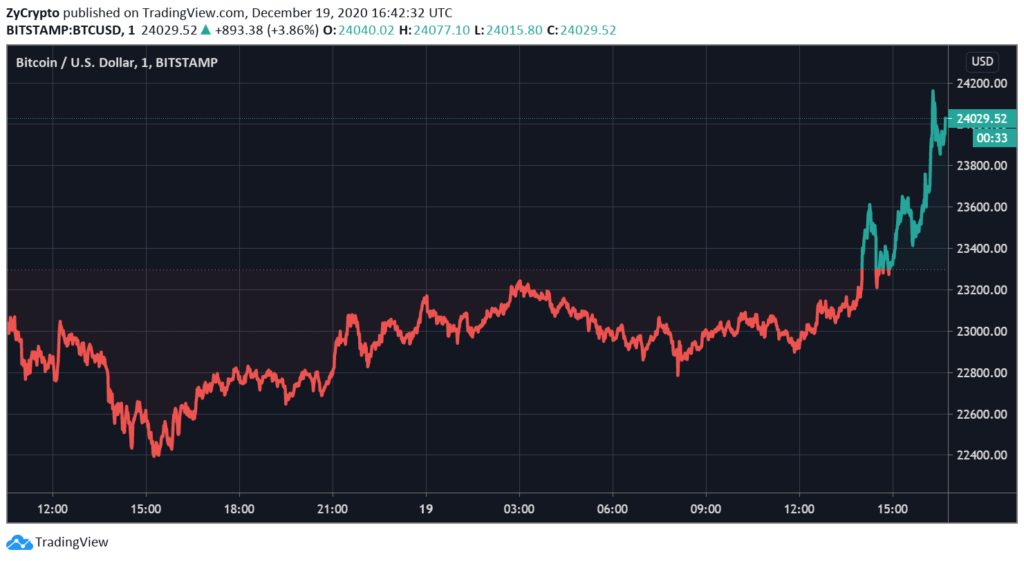 Goldman Sachs said that despite its impressive performance, Bitcoin will not threaten gold’s status as the top asset of choice for hedging against inflation.

“We do not see Bitcoin’s rising popularity as an existential threat to gold’s as the currency of last resort.”

Investors Are Choosing Bitcoin Over Gold

As Bitcoin’s upward price rally continues, more investors are cutting their exposure to gold to invest in bitcoin.  MicroStrategy, the first among multinational companies to publicly declare their investments in bitcoin has also been in the lead in buying more and more Bitcoin.

Most recently, the global head of equity strategy at Jefferies Christopher Wood trimmed his investment in gold to invest in Bitcoin. Wood also said he will increase exposure in cryptocurrencies in subsequent price corrections.

“The 50 per cent weight in physical gold bullion in the portfolio will be reduced for the first time in several years by five percent points with the money invested in Bitcoin.”

In addition to supporting Bitcoin, Wood also shares the same sentiments about Gold as Goldman Sachs. He said that gold is bullish too and will not be threatened by greed or fear of missing out in the digital assets market.

“This does not mean that GREED and far is going to give up on gold.”

Ripple & XRP Could Benefit from a Biden Administration – Analyst

Hive Blockchain ramps up hardware inventory
We and our partners use cookies on this site to improve our service, perform analytics, personalize advertising, measure advertising performance, and remember website preferences.Ok