Throughout its short history, Bitcoin (BTC) has been seen as anything but centralized, sovereign, and censorable. The crypto asset was created by a pseudonymous individual, is secured by a global group of miners, and is backed by no government, traditional finance system, or common entity.

And as a result, many have looked to Bitcoin and its brethren — other digital assets — as a much-needed escape hatch from fiat and government overreach. Indeed, the cryptocurrency was released in the wake (and seemingly as a result) of the 2008 Great Depression, and many that have since flocked to the cryptocurrency are staunch anti-establishment proponents.

Most recently, it seems that goes against the government of Hong Kong’s recent actions to impose a bill, which some deem predatory towards political dissidents and their brethren, have turned to BTC.

First spotted by Mati Greenspan of eToro, Bitcoin has begun to trade at a small but noticeable premium on Hong Kong-based exchanges, like one named “TideBit”. Greenspan notes that on the exchange, BTC is trading for a number of Hong Kong Dollars worth around $9,340, while the asset traded for $9,180 on platforms like Coinbase. This represents a 2% premium.

This small trend, per Greenspan, is a sign that Bitcoin is becoming used more and more as a safe haven, validating reports that Hong Kong residents have begun to move their assets out of the region in a bid to mitigate any financial surveillance or government seizure of their wealth. 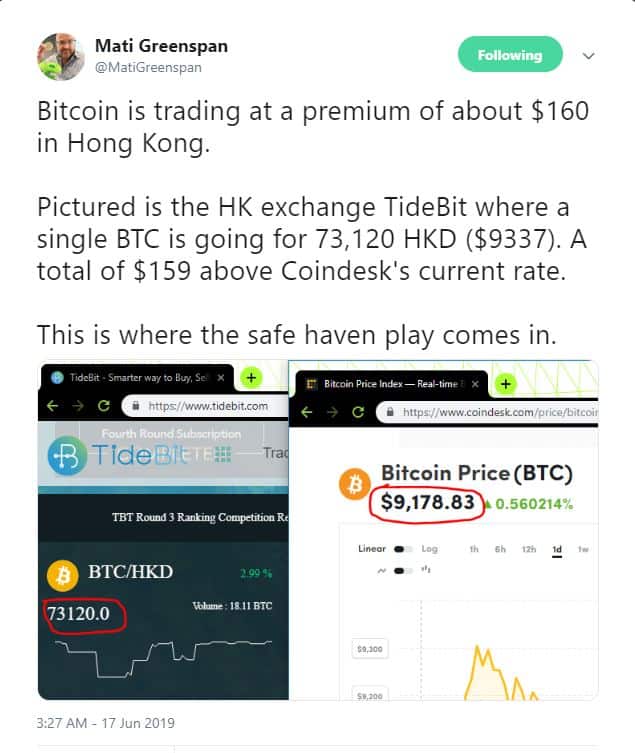 It is important to note that this isn’t the only sign that this political trend is taking place. As spotted by a Brave New Coin analyst, the weekly volume on LocalBitcoins, a peer-to-peer Bitcoin trading service, in Hong Kong has spiked — moving from ~HK$3 million to ~HK$6 million (US$380,000 to $US760,000) — within a few weeks’ time.

What is Going on in Hong Kong?

Some might be left wondering — what is going on in Hong Kong to cause this massive inflow into cryptocurrency?

Over recent weeks, Hong Kong has been a hotbed of political controversy. Carrie Lam, the so-called “chief executive” of the island city, brought forward a controversial bill that, if implemented, would allow for those deemed criminals to be seized and then extradited to Taiwan, Macau, and mainland China.

This was purportedly done in response to a criminal case, in which a man murdered his girlfriend, fled to Hong Kong, and was caught by authorities. While this legislature has an innocent premise, as there are so-called “loopholes” in the law, many in Hong Kong aren’t too sure that this amendment to the city’s extradition treaties is what it seems to be.

Those against this bill claim that if the new rule is put in place, Chinese authorities will be able to silence any political dissident, outspoken journalist, or “corrupt” businessman/woman as they please, without any regard for the judicial process or human rights. Also importantly, China would be able to seize the assets of any “criminal” in Hong Kong.

These fears have triggered a mass upheaval in the Hong Kong society in a short period of time, sparking talk between companies and individuals like of moving themselves, their operations, and assets to other Asian cities en-masse.

Analyst Who Predicted Bitcoin's V-Shaped Reversal at $3,700 Is Bullish

Here’s the "Do or Die" Price That Will Determine Ethereum’s Macro Trend
We and our partners use cookies on this site to improve our service, perform analytics, personalize advertising, measure advertising performance, and remember website preferences.Ok