BTC/USD rose by about 7.5 percent to $11,099 ahead of the Federal Reserve Chairman Jerome Powell’s press conference. Traders anticipated the Fed chair to deliver a long-term dovish outlook. And he did so by saying that the US central bank would keep interest rates lower until 2023 while aiming to target inflation above 2 percent.

Nevertheless, BTC/USD uptrend eased on Thursday and Friday as traders assessed Powell’s optimistic remarks on the US economic recovery. The pair showed resilience to bulls because of the policymakers’ reluctance to introduce a second stimulus package.

Finally, late in the week, BTC/USD inched towards its session high at $11,179, only to pare a portion of it over the weekend. The short-term gains came in the wake of low employment data and commitments by other central banks to introduce more stimulus to revive their economies.

Bitcoin looks ahead at a fruitful weekly session as the market waits for the congressional testimonies from Mr. Powell and the US Treasury Secretary Steven Mnuchin.

The two will discuss the long-pending COVID aid before the Senate Banking Committee on Thursday. Observers believe that Mr. Powell would most likely let Mr. Mnuchin talk about the US government’s plans to introduce the second stimulus package.

The central bank official might shed more light on how his office would achieve higher inflation in the coming years in his standalone address on Wednesday to the House of Representatives’ Select Subcommittee. That might further raise investors’ appetite for riskier assets.

Bitcoin has opened in positive territory this week ahead of the high-profile testimonies. 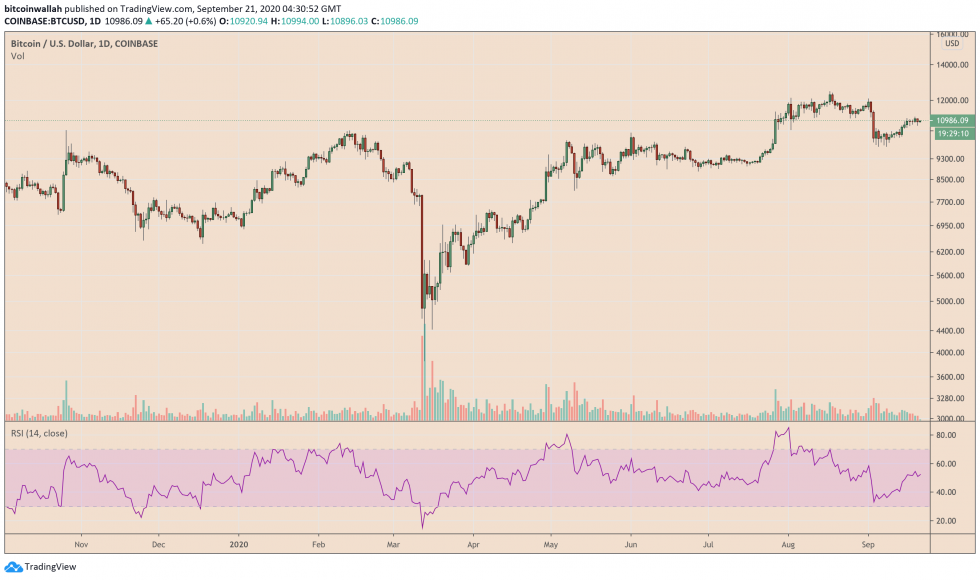 BTC/USD surged 0.64 percent to near $10,990, once again raising expectations of a $11,000-retest. It might likely do so on Monday or Tuesday, based on traders’ advanced upside reactions to Mr. Powell’s speeches, as seen throughout this year.

Part of Bitcoin’s upside outlook comes from expectations of a weaker US dollar.

The greenback was trading lower on Monday, showing investors’ resilience in adding more capital to their cash stocks. That, again, could be due to expectations from Mr. Mnuchin to confirm or point in the direction of the confirmation of the next stimulus. 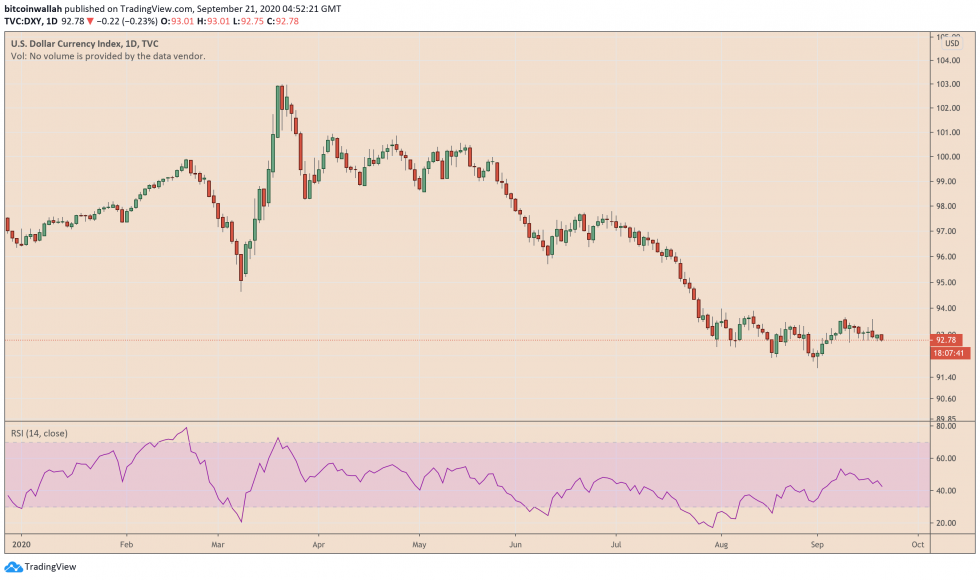 Meanwhile, the dollar could also pull back on the release of September’s US manufacturing, services, and composite PMI data.

“Analysts are expecting prints above the 50.00 mark which draws the line between contraction (below 50) and expansion (above 50),” said Dimitri Zabelin, Currency Analyst for DailyFX.com. “While the data is expected to be weaker than the prior prints – falling in line with the notion of slowing economic acceleration – the risk-on tilt that may ensue may punish USD.”

That is, of course, possible if Mr. Mnuchin commits to a stimulus deal. Last week, the Treasury Secretary said that the government should not worry about deficits or shrinking balance sheets.