Bitcoin’s range-bound roller coaster has started to head higher as the price rose to $10,400 level. As for the volatility, bitcoin has never had a poorer monthly [August] volatility in its 10-year history. August closed with monthly volatility of 44% a lot lower than its 10-year average 83% and a 10-year median of 61%. 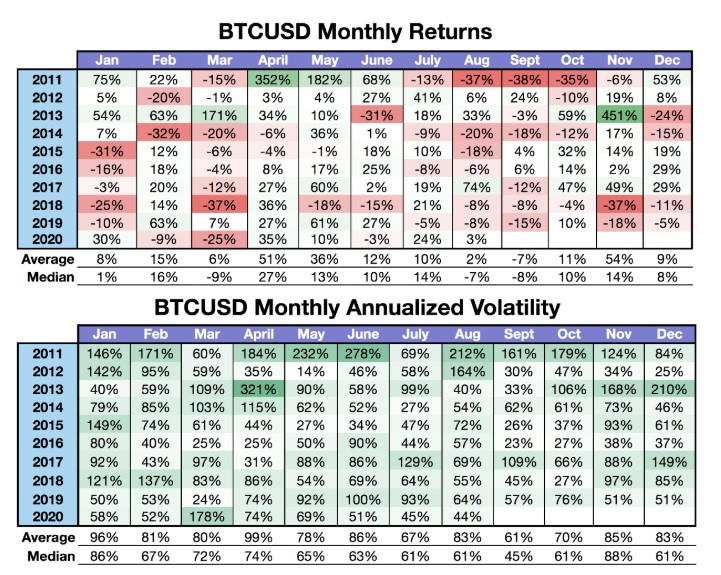 This is could be due to the price’s low volatility and range-boundedness.

How will this affect the price and what can we expect next?

Compared to August, September has relatively lower volatility and lower returns as well. Considering the CME gap ranging from $9,645 to $9,995, which further fuels the negative monthly returns for September.

September might be a lot like August, at least in the first two weeks – ie., higher volatility and price drops. This could be due to the CME gap which will surely increase volatility if the price crashes towards it.

Hence, even if we see volatility inducing price drop in early to mid-September, we might see a quick bounce where the price reverts to the mean. If the latter arrives sooner rather than later, then we can see positive returns for September, which seems unlikely. However, the same will happen in the month of October, which has a good monthly return track record.

Bitcoin’s Confined Swing not a Worry for the Crypto Space

Data Reveals Trading Volume on Tron's DEX JustSwap Inflated by Millions
We and our partners use cookies on this site to improve our service, perform analytics, personalize advertising, measure advertising performance, and remember website preferences.Ok