A few days ago, the crypto market soared past the $2 trillion mark, months after periods on end on a sea of reds and constant value decline. This time, as with other times, Bitcoin led the charge with a 50% contribution, bearing the flag of crypto with Ethereum, Polkadot, Cardano, Binance Coin, and Tether trailing solidly behind.

For the first time in approximately thirteen weeks, the market claimed its >$2 trillion spot which it lost back in May partly on account of an Elon Musk’s tweet that canceled Tesla’s proposed Bitcoin acceptance on the grounds of environmental energy concerns. Bitcoin, which has since stirred a conference of stakeholders on energy, resumed with a wide margin of market dominance eclipsing other top five coins which currently match only about 40% of Bitcoin’s $1 trillion valuation. 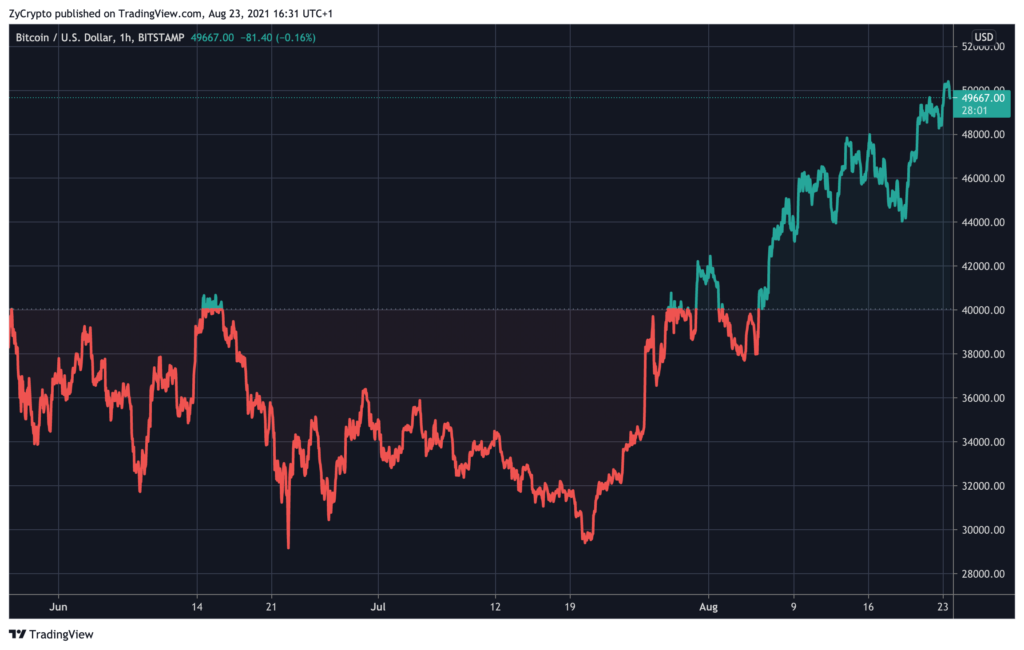 Part of the increase remains attributed to a large amount of large-scale buying and holding which was daily touted by many enthusiasts and institutional buyers since its latest dip below the $30,000 mark.

But for China’s stifling clampdown which sent miners parking and closed down hundreds of exchanges, some on-chain analysts agree that Bitcoin’s rise would have been sooner than it took. While it faced challenges in Asia, it grew in acceptance around South America with El Salvador establishing Nakamoto’s global idea, a legal tender.

In the US, it appears to be in safe hands under SEC chair Gensler, as the latest bill exempts it from IRS reporting and Gensler recently clarified that it does not fall under the jurisdiction of the SEC, going by the Howey test.

Following the recent value increase, there are proponents predicting a possible $100,000 testing before the end of the year but that appears to look far-fetched for some others, considering the fierce competition Ethereum is putting up. The Ethereum network is the busiest and most active in the entire industry and that’s because a good number of DeFi protocols are based on its comparatively faster system.

Crypto collectively stands above all S&P 500 companies in value except the duo of Steve Jobs Apple and Bill Gates’ Microsoft.