The price of a single Bitcoin [almost] reached $16,000 as traders assessed a combination of supportive macro catalysts.

One of them was the Federal Open Market Committee’s (FOMC) November meeting. On Thursday, the Federal Reserve Chairman Jerome Powell reiterated that the worsening coronavirus pandemic poses extreme risks for the US economy. He also expressed concerns about the exhaustion in American households’ savings after the dissolution of earlier stimulus relief measures.

Mr. Powell pledged to keep supporting the economy by maintaining benchmark interest rates near zero for at least three years. Meanwhile, he also proposed to make upward adjustments in the Fed’s asset purchasing program. The bank currently buys $120 billion worth of Treasury and mortgage-backed securities.

The statements stressed the US dollar. On Thursday, the greenback fell 0.94 percent as talks of more central bank spending threatened to hurt its purchasing power. Its dip prompted investors to seek opportunities elsewhere, with Bitcoin emerging as an ideal candidate thanks to its consistent uptrend since the previous two weeks.

The cryptocurrency jumped by up to 18 percent following PayPal’s foray into the cryptocurrency sector on October 21. Later, the US presidential election uncertainty followed by the prospects of a Joe Biden win against Donald Trump helped to extend its bull run (read here) further. 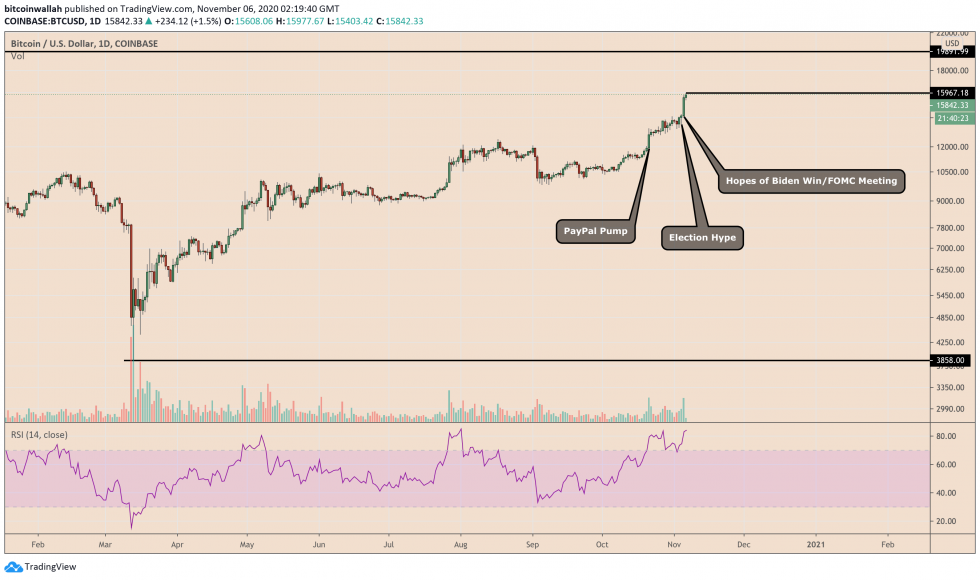 As earlier covered, the Democratic nominee has promised his voters that he would boost government spending to aid them through the pandemic-hit economy. Therefore, investors anticipate that Mr. Biden, as the next US president, will unveil a gracious stimulus package – with a baseline of at least $2 trillion.

Mr. Powell also stressed the need for a broader fiscal relief to mitigate coronavirus’s impact on Americans, adding that it would further help avoid bankruptcies and long-term labor market damage.

“We’ll have a stronger recovery if we can just get at least some more fiscal support, when it’s appropriate and at the size Congress thinks is appropriate,” the Fed chair added.

Overall, fresh dollar liquidity into the US economy would limit its appeal as safe-haven, as had happened after the March 2020 stimulus package. That somewhat explains why Bitcoin surged immediately after the FOMC meeting hit the wire.

‘I expect Bitcoin will return to all-time highs by January 2021,” said market analyst Parabolic Thies. “The craziness of a bull run ensues thereafter.”

He meanwhile warned that the cryptocurrency would risk correcting by at least 30 percent during its current bull run.