The cryptocurrency market recently saw a positive rally, with an infusion of $20 million into the total market cap. Bitcoin [BTC] started off the chain reaction with a break into the $7000 resistance, now posting a 10% growth in the past 24 hours. The market followed suit, with the final list of losers and gainers showing surprising results. 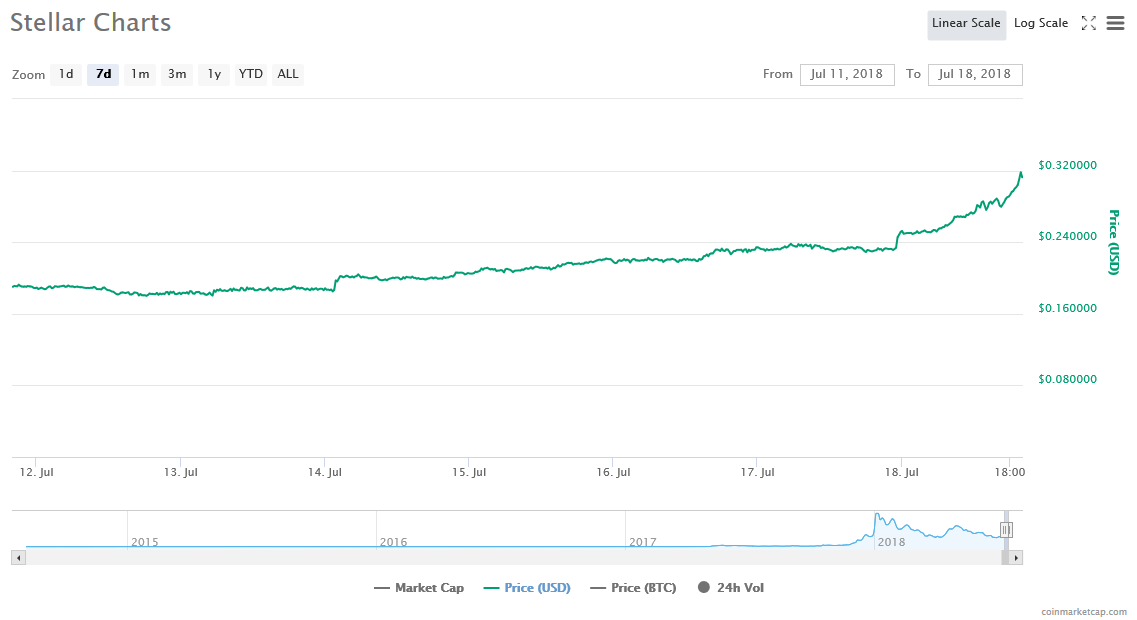 The coin’s highest point this week was at $0.29, which occurred after the rally to $0.28. Lumens lowest point in the past week was at $0.18 on 12th July, where the market was at a low state. Notably, XLM was one of the 5 coins included in Coinbase’s announcement of a potential listing. After the news, the coin pumped in a slow rally to $0.23 before yesterday’s hike.

Another surprise entry into the top of the list is Cardano’s ADA currency, coming in second with a 24-hour growth rate of 17.84%. The coin is currently trading at $0.17 after yesterday’s rally drove the price from $0.15 to a high of $0.18. It is ranked #8 on CoinMarketCap, with a market cap of $4.7 billion. 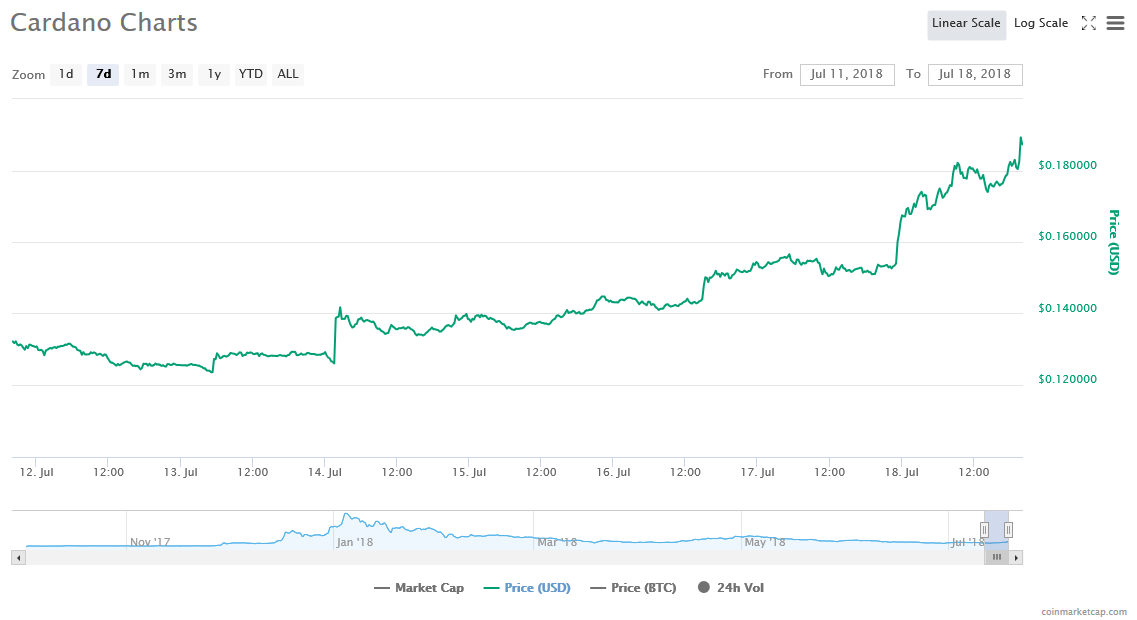 The coin saw a slow rally to $0.15 over the week from a low of $0.12 on 13th July. It was also one of the tokens that was mentioned by Coinbase. The week was filled with information software updates dispensed by Charles Hoskinson, the founder of Cardano. 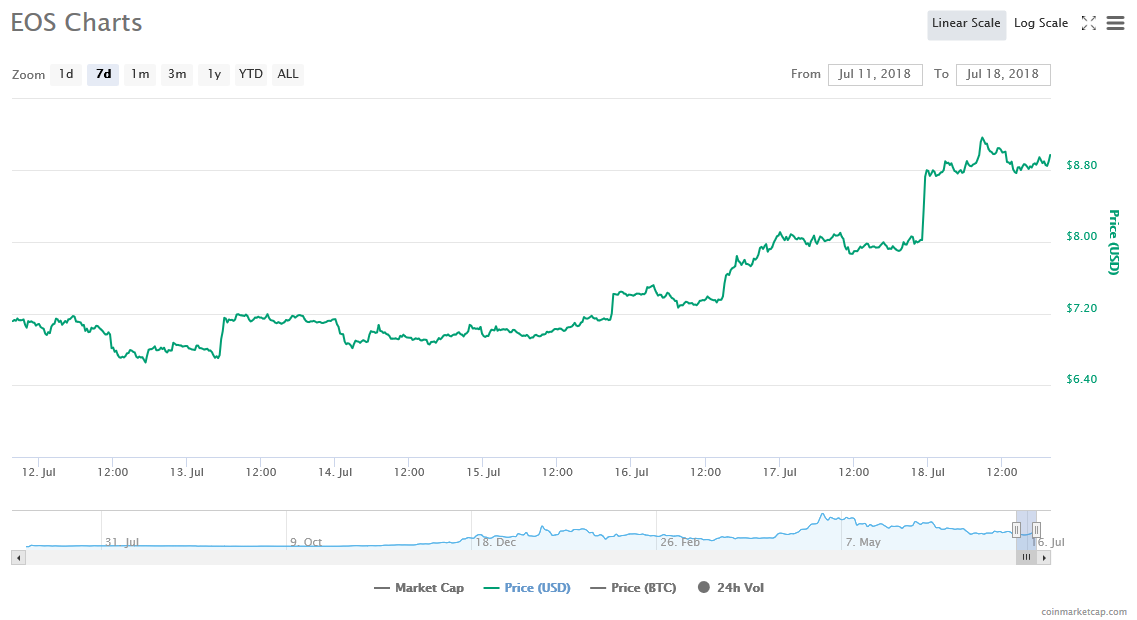 Last week was filled with big news for EOS, with investments received into Block.one by Bitmain and Peter Thiel. Amongst this, the coin saw accusations of the EOS community manipulating gas prices on the Ethereum [ETH] blockchain.

The first cryptocurrency that kickstarted the market hike broke the $7000 resistance with abandon, with a current price of $7423. With a total market cap of $127 billion, the coin is currently dominating 43% of the market. 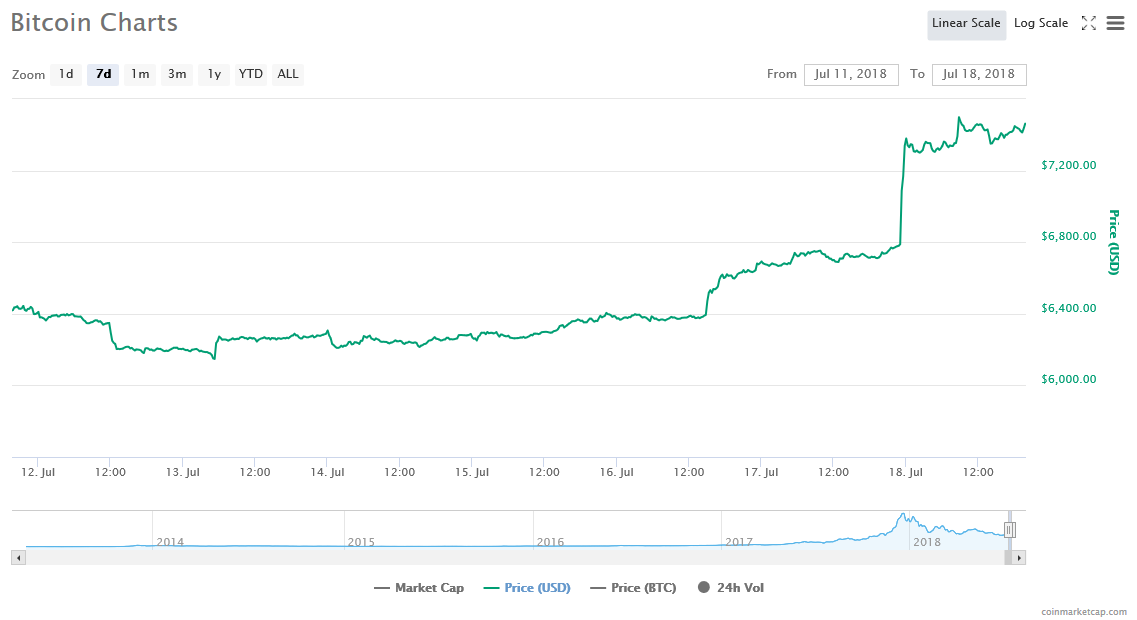 The cryptocurrency saw a low of $6140 on 13th last week, with a slight rally seen on 16th from $6379 to $6610. This week was filled to the brim to bullish news on Bitcoin, from the announcement that Blackrock was moving into the crypto space to the appointment of a Bitcoin-friendly CEO to Goldman Sachs. Billionaire Steve Cohen also invested in the coin through a hedge fund. 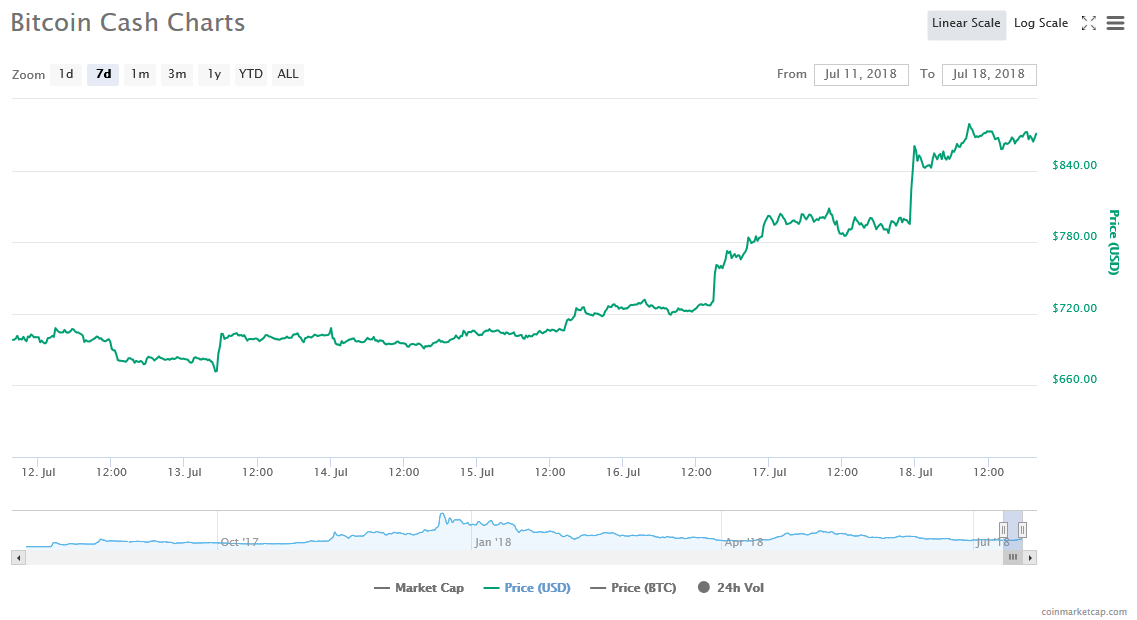 The cryptocurrency saw a hike from $730 to $780 on the 16th of July. There was a proposal submitted by Bitmain for a smart contract system on the platform during the week, with Craig Wright also acquiring 3 patents for Digital Rights Management on the Bitcoin Cash blockchain. Robinhood also added support for the trading of the coin with 0% trading fees. 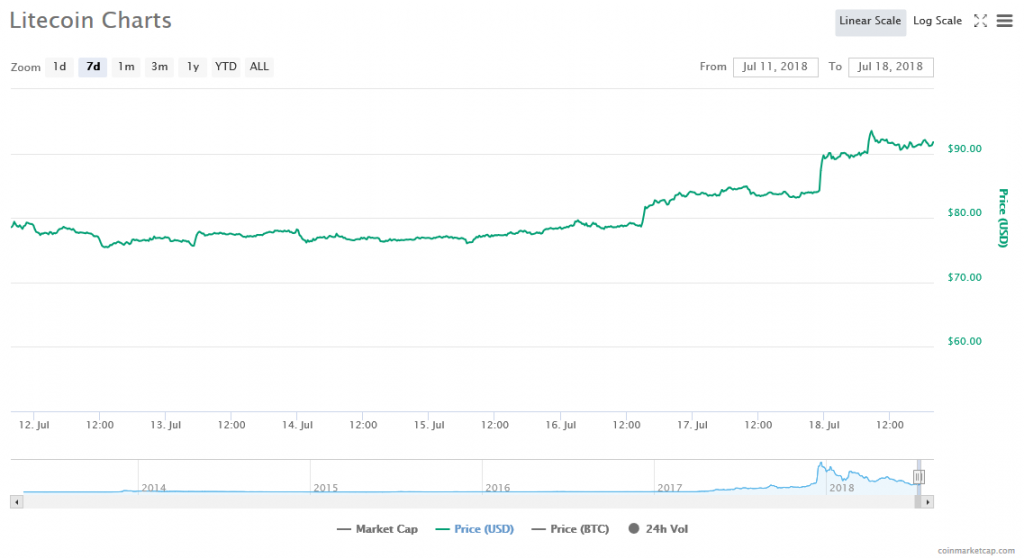 The low hit by the coin last week was at $75 on 13th of July, followed by a slight rally from $79 to $84 on 16th. This week, Litecoin and TokenPay entered into a partnership for a 10% stake in the Swiss bank known as WEG.

XRP saw a listing on SBI’s Virtual Currencies exchange platform as a result of its partnership with the group. It was also spoken about during Ripple’s circuit of conferences. 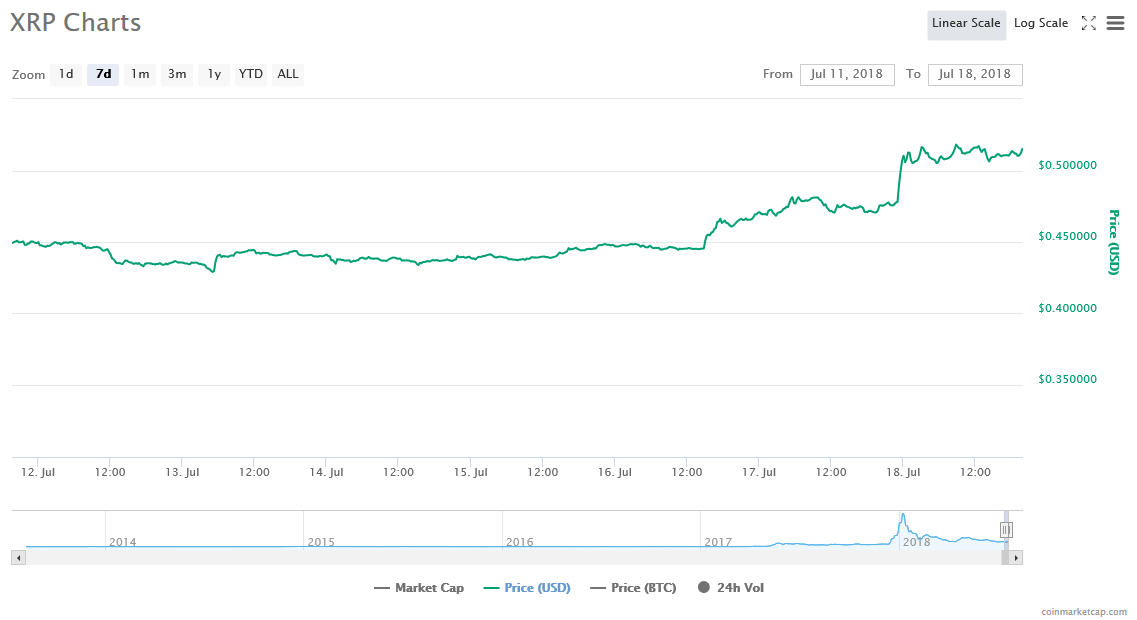 Over the week, Tron saw a coin burn of 100 billion tokens with the third batch of burning taking place yesterday. The token also resumed trading with 20 exchanges and still counting. 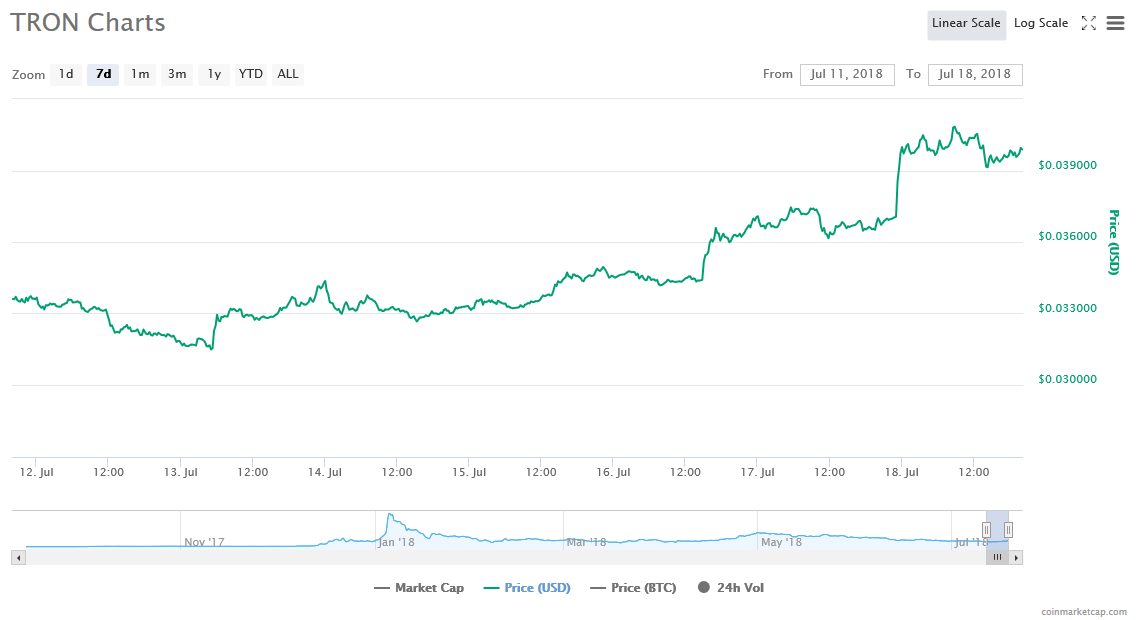 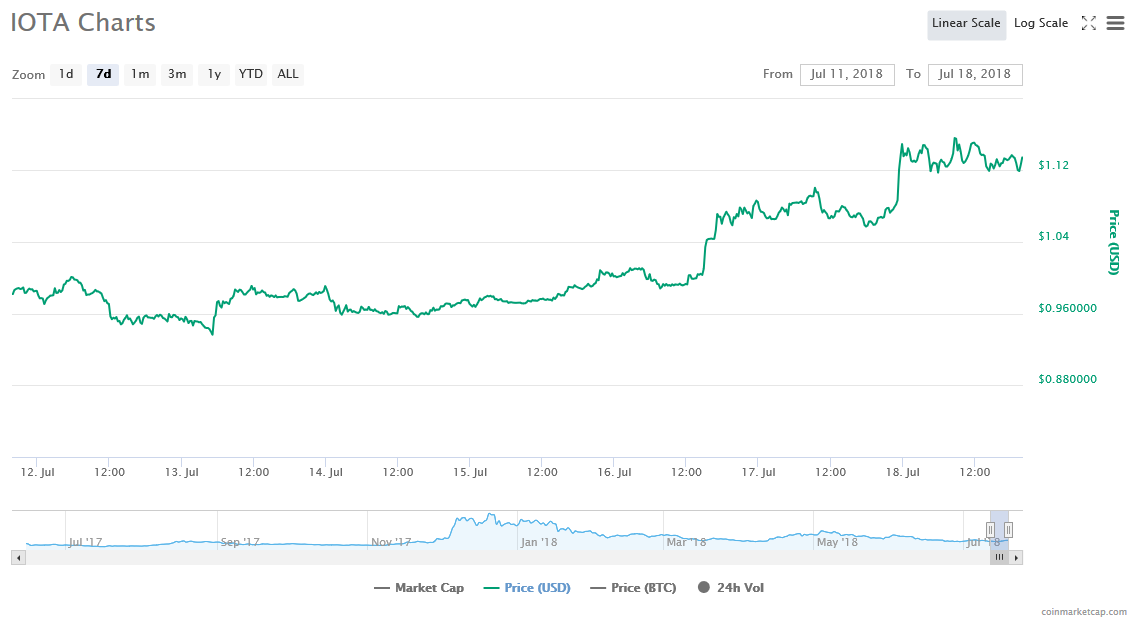 It saw a rally last week from $452 to $473 on 16th from a low of $424 on 13th. A hedge fund recently recommended shorting Ethereum, which contrasts with the news of Steve Cohen investing in the cryptocurrency. EOS and Ethereum were in a flame war over the week with multiple accusations of gas price manipulation. 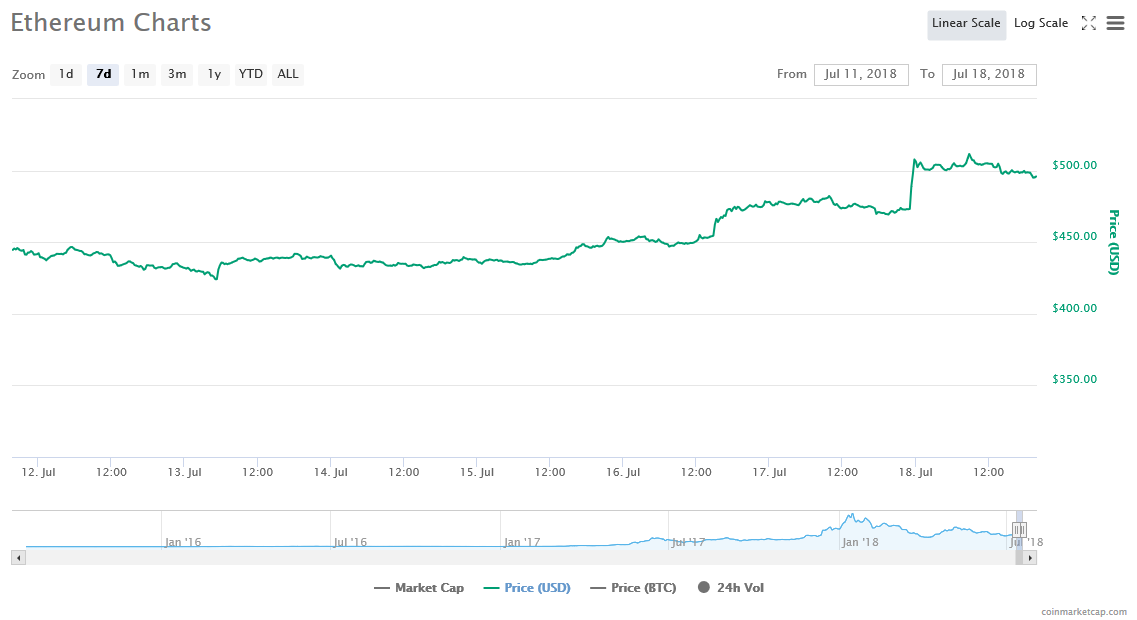