Bitcoin has been taking the lead over the entire market today, with the cryptocurrency’s price rallying past $20,000 yesterday and seeing parabolic gains today while altcoins mostly stagnate.

Where it trends in the mid-term will undoubtedly depend largely on whether or not it can maintain its present strength, as any “blow-off top” could prove to be dire for its price action.

One trader believes that the cryptocurrency’s near-term trend will govern that of altcoins, noting that a price drop seen by BTC could actually be advantageous for altcoins.

Bitcoin Rally Sucks the Oxygen Out of the Room

The selling pressure seen at $20,000 was significant, but the clean break above allowed BTC to enter what appears to be price discovery mode.

Altcoins have stagnated mostly, seeing gains that are well below those seen by the benchmark crypto.

Altcoins May Soon See a Flood of Capital

One trader explained in a recent tweet that altcoins are likely to see a massive capital flood soon as investors rotate out of Bitcoin.

He pointed to Ethereum’s 8% surge seen in the time directly after Bitcoin peaked at highs of $23,700, saying: 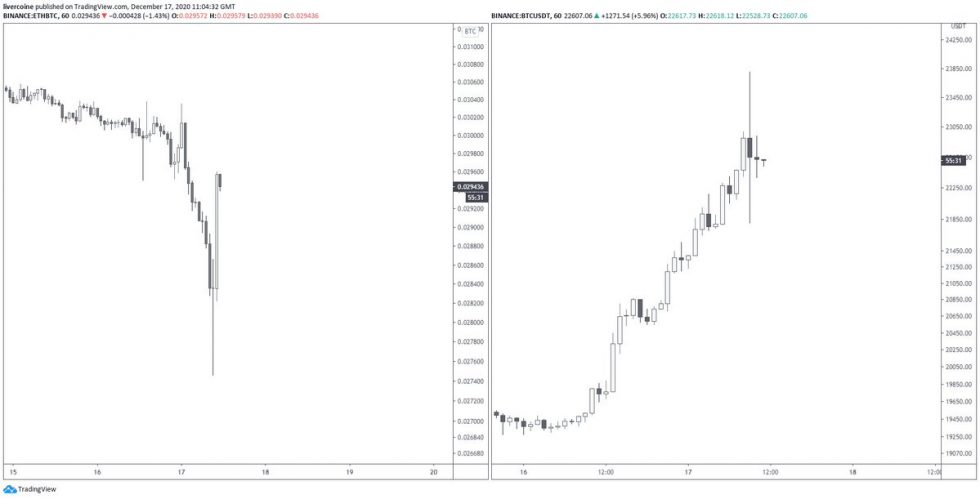 If this trend persists, then Bitcoin price declines could actually become bullish catalysts for altcoins in the near-term.

Key metrics show this week’s $4B Bitcoin options expiry favors bulls
We and our partners use cookies on this site to improve our service, perform analytics, personalize advertising, measure advertising performance, and remember website preferences.Ok