Since the start of 2019, stablecoins have found a new level of importance following the involvement of major financial and non-financial institutions such as JP Morgan Chase and Facebook.

Justin Sun, CEO of TRON Foundation, had also spoken highly about the significance of stablecoins on various occasions and despite the Tether-Bitfinex fiasco, the popularity of stablecoins has failed to drop significantly.

Now, according to a report released by MakerDao, the stablecoin Dai, has exhibited consistent growth on the Ethereum ecosystem. Between February and June 2019, Ethereum developers have added new Dai integrations, each of which have assisted Dai use-cases in gaining the attention of the larger crypto-community. 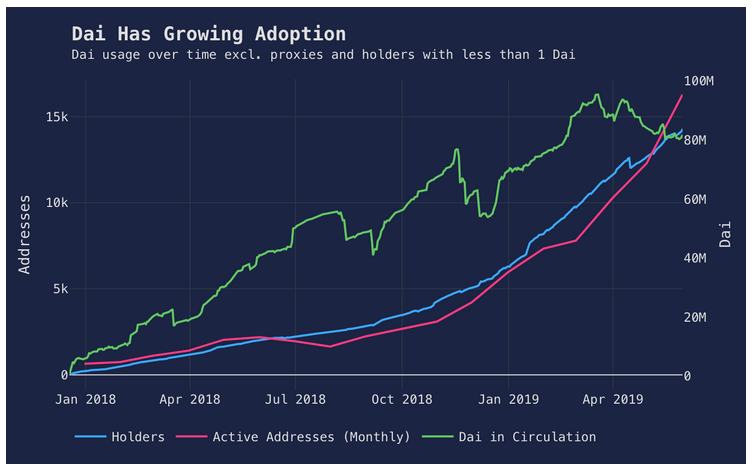 From the chart above, it can be observed that Dai adoption experienced a steady growth of approx 20% per month since the start of January 2019. In terms of volume, a significant amount of sum was also transferred over the past month. It was reported that 1.4 billion Dai were transferred in May. It was also listed that around 16,300 unique addresses were involved in the transactions, almost double the activity recorded in January.

The slight dip witnessed in the circulation charts of Dai is a pre-designed mechanism owing to Stability fee adjustment, the report said. The mechanism keeps the valuation of Dai at $1. 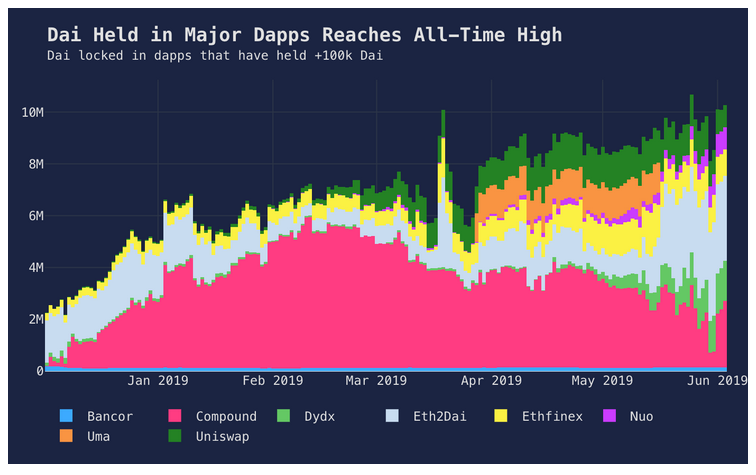 Another major statistic released by the report was the involvement of Dai in the number of dApps locked up with the stablecoin.

Dai was reported to be at its all-time high in terms of dApps, which was mainly due to the traffic recorded by Dai on decentralized crypto-exchanges such as Eth2DAi and Uniswap.

Keeping in line with the same stats, decentralized exchanges were the top use-cases for Dai, which accounted for roughly 70% of all Dai transactions in and around the exchanges.

Nearly 10% of Bitcoin’s Current Supply is Dormant; Why This Matters

If Bitcoin Follows the 2012 and 2016 Halvings, Price Will Go "Almost Vertical"

Stablecoins Could Transfer Value Across Blockchains, Says Vitalik Buterin
We and our partners use cookies on this site to improve our service, perform analytics, personalize advertising, measure advertising performance, and remember website preferences.Ok